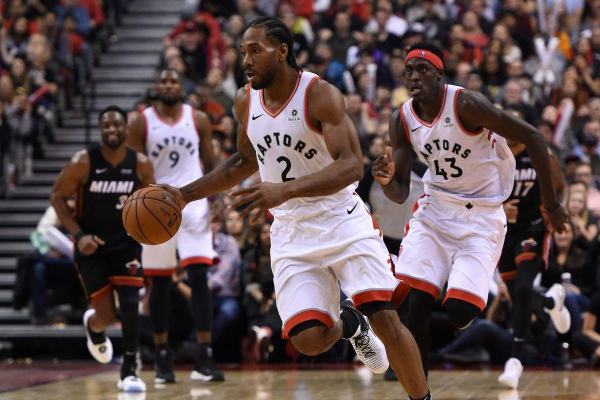 The Philadelphia 76ers are set to host the TorontoRaptors tonight in the Wells Fargo Center. This is a potential Eastern Conference Finals matchup with minimal injury problems, so I am really excited to see how this goes. The Raptors are still without Jonas Valanciunas, who should be back soon. The 76ers will be without Wilson Chandler, who suffered a hamstring injury that should keep him out a few more weeks. Kyle Lowry was listed as questionable, but it seems like he has decided to play in his hometown.

The Raptors are coming into this game off of a big win over the Clippers without Lowry, but they have struggled a bit in recent games. The loss to the Bucks was a difficult one, but it’s not horrible to lose to the best record in the NBA. The losses to the Mavericks and Pacers are slightly more concerning to me. The Raptors were much better to start the season and have run into more bumps recently, even though I like the changes that they have made. The biggest change made recently is that they are shortening the big-man rotation and using Siakam and Ibaka much more. We are seeing those two players play about 70 minutes combined each game, which I think makes them a much better team, especially against teams like the Bucks and even the Celtics, who will want to go small.

This change will be really interesting to see when they take the court against Joel Embiid. Embiid is a strong, 7’2 center that may be able to have his way with both Ibaka and Siakam in the post physically. Both Ibaka and Siakam are good defenders, but I don’t particularly love the overall matchup in this spot. What they can do more often is draw Embiid out to the 3-point line on the defensive end. When Embiid is not in the post, the 76er defense is really, really bad. I expect this to open up driving lanes for Kyle Lowry and Kawhi Leonard to get to the basket with less resistance than normal. Danny Green and the rest of the Raptors supporting cast do not excite me at all. I expect Danny Green to be chasing Redick all over the place around screens all game.

The 76ers offensive game plan is always interesting because the defense surrounding Joel Embiid and Ben Simmons is a very strange situation. In previous games, we have seen the Raptors try to guard both Jimmy Butler and Ben Simmons with Kawhi Leonard. I would assume that we see more of the same based on who is playing better. The 76ers are a matchup nightmare that would probably be best defended by a zone, which has seen a drastic increase in usage in the NBA this year. Both Ben Simmons and Joel Embiid are most effective right around the rim and 4 of the 5 76ers starters are over 6’7. What this means is that there is almost always an interior advantage for the Sixers. Without Wilson Chandler, I expect the Sixers to start MikeMuscala.

This is a better matchup for the 76ers than their smaller lineup with T.J. McConnell. The Raptors would love to put Lowry on McConnell, Green on Redick, Leonard on Butler, Siakam on Simmons, and Ibaka on Embiid. When this is what the matchups generally are, I think that the Raptors are at a much larger disadvantage than vs. the larger 76er lineup.

The 76ers are 3 point favorites at home in this spot. I think this will be a very close game and I think that the Wilson Chandler injury will force the 76ers to play smaller than they’d like to. I like the Raptors here +3 in a litmus test game for them in a hostile environment down the stretch run of the season in their 4th matchup of the year.