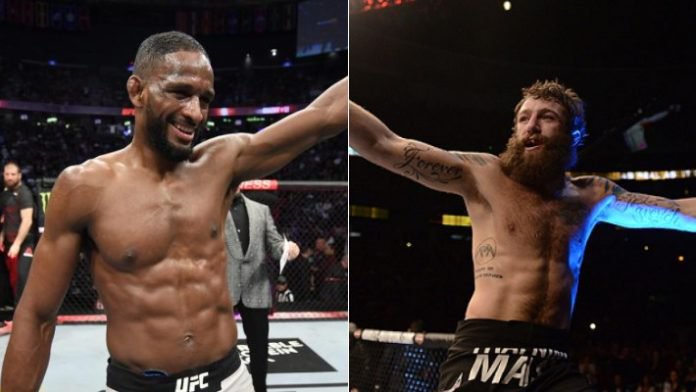 The UFC returned to action this past weekend after a month long hiatus and a Conor McGregor headlined pay-per-view card is set for this Saturday, but sandwiched in-between those two events is a mid-week card set for Wednesday afternoon.

Michael Chiesa and Neil Magny are set to square off in a welterweight main event with the rest of the card being chock-full of UFC prospects.

In a battle between two top-10 ranked fighters, the winner of the main event will catapult themselves into title contention in the 170 lbs division. Both winners are entering the bout on a three-fight win streak. Magny, who fought three times in 2020, is set as the -136 favorite at FanDuel.

Magny came out victorious against Li Jingliang, Anthony Rocco Martin, and Robbie Lawler in 2020 with the most recent bout coming in August. He hasn’t lost as the betting favorite since losing to Lorenz Larkin as a -175 favorite at UFC 202 in August of 2016.

Chiesa is comfortable when being set as the underdog as he’s 3-2 in his UFC career in that including his latest fight when he beat Rafael Dos Anjos despite his odds being set at +160.

Expect the majority of this fight to be spent on the ground as both fighters like to grapple, especially Chiesa who averages 3.84 takedowns per 15 minutes. When two fighters decide to grapple for a large portion of the contest, the fighter who’s more aggressive on the ground is usually the one that gets their arm raised.

Chiesa averages 1.1 submission attempts per fight and is relentless with his ground strikes when it gets there. The aggressiveness paired with Chiesa’s profitable record as an underdog is enough for me to bet on “Maverick” at +116.

Mounir Lazzez took the UFC by storm last summer when he defeated Abdul Alhassan as a +300 underdog in his debut fight. Now, in just his second fight for the promotion, he’s being thrust into the spotlight in a co-main event bout against longtime UFC fighter Warlley Alves. Alves is coming off a loss to Randy Brown back in November of 2019 in which he was set as a slight -125 favorite. This will be the first time that Warlley Alves has been set as a betting underdog since his loss to the current UFC Welterweight Champion Kamaru Usman back in 2016. He’s gone 3-2 since that fight and he was set as the favorite in all five of those bouts.

Don’t let the lack of UFC experience scare you away from laying the juice on Lazzez. He landed an astounding 6.53 significant strikes per minute in his debut while also landing 4 takedowns. The young prospect should be able to land at will against Alves who has just a 50% significant strike defense.

An “0” has to go in this light heavy weight bout but this time that “0” is in the win column. Neither fighter has won inside the octagon since earning a UFC contract and it can be assumed that the loser of this fight will be sent packing. Villanueva has lost two-straight fights via TKO since earning a spot with the promotion while Castro has lost his first three, two via TKO and one via submission.

Both fighters are entering the bout with a combined five fights, all being finishes, so your immediate assumption is to bet on the same thing to happen this time around. While it might seem stupid to go against history with these fighters, we’ve seen time and time again that when a fighter is in a “win or go home” scenario, they fight a lot more conservatively.

Neither fighter wants to make a wrong move and find themselves on the wrong end of a stoppage once again so expect this fight to be a lot more methodical than their previous bouts inside the octagon. You can bet on it to go OVER 1.5 rounds at -108 at FanDuel which is fantastic value. Even if a stoppage comes in the second half of the fight, the over 1.5 rounds bet will still be graded a winner.