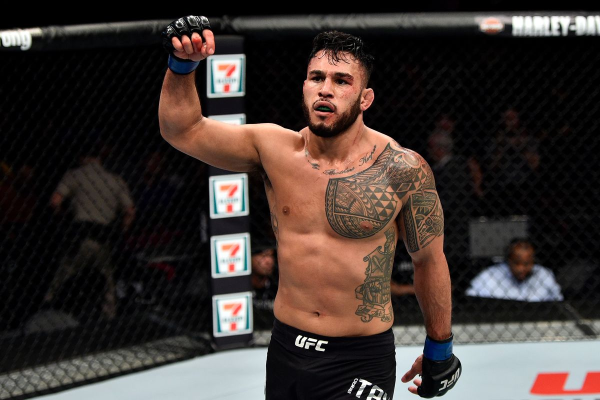 This week is one of the biggest weeks of the year for the UFC, as they host International Fight Week in Las Vegas, Nevada.  The event will consist of back to back nights of MMA, one of Friday with the Ultimate Fighter Season 27 Finale, and one on Saturday with UFC 226.  Both of these events are stacked to the brim with exciting fights

The Main Event for TUF Season 27 Finale is in the Middleweight Division and will feature two very talented strikers in Brad Tavares and Israel Adesanya.  Adesanya has gained a ton of hype most recently with his back to back wins in the UFC. He has beaten Marvin Vettori and Rob Wilkinson and is looking to make Tavares the third notch on his UFC resume.

Tavares is a very talented striker that trains with some of the best strikers in the world at Xtreme Couture.  Tavares is not getting any respect at all in this fight. He has been around the UFC since 2010 and has always been one of the more reliable fighters in the UFC’s Middleweight Division.  This is the first time he will get a chance to headline a show and should make the most of his opportunity.

Adesanya is a world class striker but I don’t think this fight will be contested on the feet.  I think Tavares is smart enough to go in and immediately take this fight to the ground, while both fighters are dry.  Tavares is going to go all in looking for that takedown, and when he gets the fight to the ground, he should be able to get the early stoppage by submission.

The Main Event on Saturday for UFC 226 is between the UFC Heavyweight Champion Stipe Miocic and UFC Light Heavyweight Champion Daniel Cormier.  This is the Super Fight that the UFC has dreamed about since their hay day with the rumored fights of Anderson Silva and George St. Pierre. The Super Fights never seemed to pan out for the UFC so for this fight to make it through and be just days away, is extremely exciting for all sports fans.

Stipe Miocic is one of the most underrated fighters in the UFC and even though he is the Heavyweight Champ, he still doesn’t get the respect he deserves. Miocic is 18-2 with his only losses coming against Junior Dos Santos and Stefan Struve. In his last fight, he was defending his heavyweight title and came in as the underdog.  Miocic won that fight, as well as the five fights prior to bring his win streak to six fights. Miocic is a very smart fighter that will do whatever necessary to win the fight.

This fight is going to be really good and you can legitimately pick either fighter and have a legit shot at winning.  I am going to side with Miocic here for the simple reason that his striking is more crisp and pinpoint. Additionally I think Cormier will try too hard at the takedowns, which Miocic will be ready for.  Miocic knows what Cormier is going to try and do so his path to victory is catch Cormier coming in low for a takedown and win via KO.

My favorite play on the week is going to be Paul Felder over Mike Perry.  Felder is a 155 LB Lightweight that will be taking on Perry, who is a 170 LB Welterweight, yet Felder has the size advantage in this fight.  Felder cuts a ton of weight to get down to 155 lbs and if you watched the media staredowns, you noticed the Felder was the much bigger fighter.  Take that into the equation with Felder not having to cut weight and not having to deplete his body of his hydration. Perry is a wild puncher that really doesn’t have technical striking like Felder.  Felder is one of the top strikers in the Lightweight Division, who also isn’t afraid to go to the ground to try for submissions. When this fight was first announced, Perry was the very heavy favorite, over -220 but a large amount of money and major wagers went on Felder to win the fight.  Hopefully, you played it early and got Felder at around +200 but if not, you are still safe to play him at his current odds of Felder -152!

My favorite underdog play for this week is going to be Mike Trizano from TUF 27 Finale.  You can find Trizano as high as +160 on some books but you can also find him at -120 so do your due diligence and play him at the best sportsbook that gives you the best odds.  Trizano is a tough striker that can also beat you on the ground. He has a very strong grappling game and trains out of Tiger Schulmann MMA with the likes of Jimmie Rivera, Lyman Good, Shane Burgos and those guys are all great strikers.  Both Trizano and his opponent Joe Giannetti have bright futures in the UFC but in this fight, we have to side with Trizano over Giannetti due to the striking advantage.