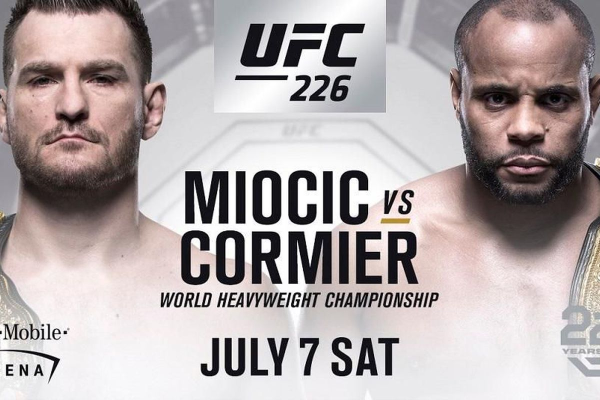 The 2018 UFC International Fight Week will get underway, starting on Tuesday, June 3, 2018, and last throughout the week. This is an annual tradition that has been around for several years now and includes multiple fight night’s and the annual Hall of Fame Induction Ceremony. This year, the UFC will be hosting the Featherweight and Lightweight Finales of the Ultimate Fighter on Friday and the big UFC 226 card on Saturday.

In this article, we will take a look at some of the upcoming fights from Fight Week that can be profitable and help build those bank rolls. Next week, we will still give out our top plays for the events but this is simply a precursor to the article.

The Ultimate Fighter Season 27 Finalewill take place on Friday Night and is one of the best cards from a betting standpoint, that I’ve seen in many years. There are really no large odds on the fight card, which basically means you will have more options to choose from when selecting your fights. These are the best cards to bet on in my opinion because you aren’t tempted into throwing away money, by wagering on those high dollar underdogs that rarely win.

The Main Event on the evening is slated to be Brad Tavares vs. IsraelAdesanya however this is a fight that was in question about a month ago when UFC President Dana White announced that Tavares had broken his foot and ruled him out of the fight. Tavares is 17-4, while Adesanya is undefeated at 12-0. Adesanya is the slight favorite in this fight with odds of -165 compared to Tavares being +140.

One of the fights that I have my eyes on is the Middleweight battle between Oskar Piechota and Gerald Meerschaert. This is bound to be a great fight and one that I think will provide us with one of the best finishes on the evening. First off, the oddsmakers have listed OskarPiechota as a -210 favorite in the fight and to be completely honest with you, I think those odds are a great value. Piechota and Meerschaert are both submission specialists however the advantage goes to Piechota here. The guy is a finishing machine, submitting five and knocking out five opponents, while only going the distance once, which happened to be his UFC debut against Jonathan Wilson.

Another fight from TUFSeason27 Finale that I have my eyes on for an underdog is in the Barb Honchak vs. Roxanne Modafferi in the women’s Flyweight Division. Honchak comes into this fight as one of the heavier favorites at -175, which brings a return on Modafferi at +140. This fight will absolutely come down to who can demonstrate their gameplan. If you think the fight goes to the ground, well then you want to play the underdog with Modafferi having the slight advantage in the grappling game, while Honchak having the advantage in the striking. That being said, these two have already fought once, outside of the UFC, and Modafferi ended up getting submitted by Honchak to throw a wrench into the entire equation.

UFC 226 is probably my favorite card of the week and has the potential to be the best fight card of the entire summer, highlighted by the Main Event Title Fight between UFC Heavyweight Champion Stipe Miocic and UFC Light Heavyweight Champion Daniel Cormier. This is a SUPER FIGHT that the UFC has been looking to put on for many years. Super Fight rumors go back as far as George St. Pierre vs. Anderson Silva but rarely do they ever turn out due to various reasons but this particular fight worked out and will be very entertaining.

The card is stacked from top to bottom, with the Co-Main Event featuring UFC Featherweight Champion taking on #1 contender Brian Ortega. This fight is going to be one of the best Featherweight battles in recent history and will decide who will be the Featherweight Champion in the UFC. Holloway is currently the slight favorite in the fight at -145, while the return on Ortega will come in between +125 and +135.

There are currently 12 fights scheduled for this fight card however it was announced on Friday that Yancy Medeiros has been injured and has pulled out of his fight with Mike Perry. That would of been an amazing striking match but I have confirmed that UFC Lightweight Paul Felder will step up in weight and take on Perry at the Welterweight limit of 170 lbs. Felder has lost several opponents and is simply looking to find a fight. Felder is a talented striker and is much more technical than Perry. That fight should be a great one for UFC 226.

Look for our complete breakdown of TUF 27 and UFC 226 in the coming days with all of our handicapping selections from UFC International Fight Week!