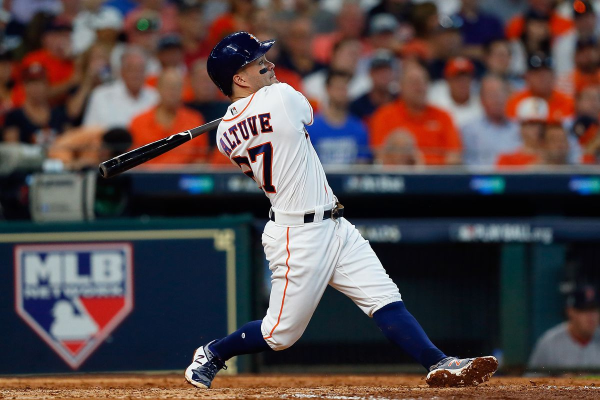 Sunday Night Baseball will consist of two teams that met up last year in the opening round of the playoffs when the Cleveland Indians (15-11) travel to Minute Maid Park to take on the Houston Astros (16-11). The Indians have taken two of the first three games, though Houston won 4-3 in 10 innings on Saturday behind a strong pitching performance from Roberto Osuna in relief and the heroics of Tony Kemp, who deposited an Adam Cimber pitch over the rightfield fence in the 10th inning for a walk-off home run.

Sunday’s pitching matchup features Carlos Carrasco (2-2, 6.00 ERA) getting the ball for the Indians while southpaw Wade Miley (1-2, 3.58 ERA) goes for the Astros. First pitch for this contest is scheduled for 7:08 pm ET.

The moneyline for Sunday’s game is set at the Cleveland Indians +105 and the Houston Astros -125. The over/under for runs scored is set at 8.5.

Through three games, the Indians’ pitching staff has done a nice job of keeping the Astros’ offense relatively in check. Thus far, Cleveland has held Houston to just 8 runs in the series, and they will look to continue that trend on Sunday.

Trying to keep them at bay will be Carlos Carrasco. On the season, Carrasco is 2-2 with a 6.00 ERA, 1.52 WHIP and opponents are hitting a robust .310 against him. In 21 innings of work, Carrasco has allowed 27 hits, 14 earned runs and 3 home runs. His strikeout-to-walk ratio is solid, though, as he has struck out 33 while walking just 5.

In his last start, a 3-1 loss to the Marlins, Carrasco left the game early, having gone 4 innings, giving up just 2 hits and no runs while striking out 4. Unfortunately for Carrasco, the bullpen let the game slip after he left.

Still, the Indians would love to get All-Star Jose Ramirez going more consistently. In his 98 at-bats this season, he is hitting just .173/.268/.276 with 2 home runs, 9 runs batted in and 13 runs scored. To his credit, he has already swiped 8 bags this season.

Astros Hoping To Find Some Offense

Between George Springer, Jose Altuve, Alex Bregman, Michael Brantley and Carlos Correa, the Astros have one of the most feared lineups in baseball. Unfortunately for Houston, though, they have struggled for much of the first three games of this series. Still, they are capable of breaking out at any moment, something that the Indians’ Carlos Carrasco has to be aware of.

Two players to watch in this one are Altuve and outfielder Josh Reddick. In his career, Altuve is hitting .435 against Carrasco in 23 at-bats with one home run and 3 runs batted in. For Reddick, he is 4 for 10 against the right-hander with a home run and 4 runs batted in.

In his last outing, a 10-4 win over the Minnesota Twins, Miley had a quality start, pitching 6 innings of 3 run ball, allowing just 3 hits and 1 walk while striking out 7. He will look to build off of this outing against the Indians in primetime on Sunday.

This one comes down to pitching. Over their careers, I would generally take Carlos Carrasco and his stuff over Wade Miley most any day; however, this season Miley has simply outpitched Carrasco. While he has the talent, Carrasco has struggled to keep runners off of the bases.

Even though they have not been quite as explosive this series, the Astros feature a lineup that does not have many easy outs in it, and this may be the game that they show it off. Throw in the fact that Houston features a pitching staff that ranks in the top-10 in the league in earned run average and an offense that ranks in the top-10 in runs scored at home and it is a recipe for disaster for opposing teams.

The Indians won’t make it easy, but for my money, I am taking the Astros at -125.