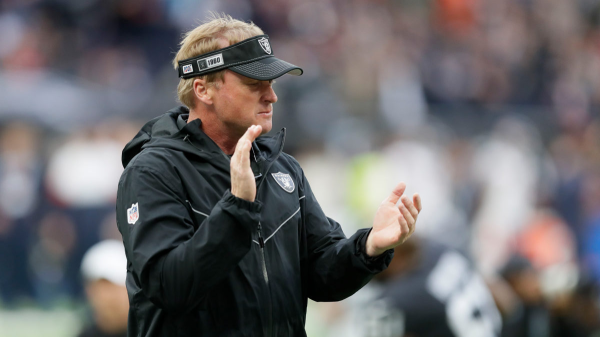 Even without starting quarterback Mitchell Trubisky, the Chicago Bears were favored by 6.5 points against the Oakland Raiders in Sunday’s London game, which took place at Tottenham Hotspur Stadium. With a seven-point fourth quarter, the Raiders pulled off the 24-21 upset and moved to 3-2 on the season.

In the AFC West, Oakland now sits just one game behind the 4-1 Kansas City Chiefs and a game ahead of the 2-3 Los Angeles Chargers.

The Raiders-Bears contest was a rollercoaster, as neither team scored a point in the first quarter before a 17-point second quarter gave the Raiders a 17-0 lead going into halftime. A disaster of a third quarter for Oakland allowed the Bears to steal the lead with a 21-point explosion.

But while holding Chicago scoreless in the fourth, the Raiders won the game on a Josh Jacobs two-yard touchdown run to cap a drive that included a successful fake punt.

While racking up 398 yards of offense, the Raiders’ most impressive aspect of the game was holding Chicago to 236 yards, including just 42 yards on the ground.

Bears quarterback Chase Daniel was 22 of 30 for 231 yards with a pair of touchdowns and a pair of interceptions. Derek Carr did enough for the Raiders as he threw for 229 yards without a TD or pick.

Jacobs was the standout performer in the game. On 26 carries, Oakland’s rookie feature back rushed for 123 yards and two touchdowns.

Does Oakland Have Playoff Potential?

Jon Gruden’s team entered the 2019 season surrounded by controversy, most notably the noise around star receiver Antonio Brown, who had a number of issues in his short stay in Oakland before being released. And while the Raiders weren’t expected to be within shouting distance of the Chiefs in the division, they now find themselves just one game back.

With 20.6 points per game and 348 yards per game, the Raiders have been a mediocre football team on the offensive side of the ball. And with 24.6 points allowed on 355 opposing yards per game, Oakland is a middle-of-the-pack team on defense, as well.

However, it’s worth noting that Oakland has played a relatively tough schedule thus far. The team’s two losses came against a Super Bowl favorite in Kansas City and a solid Minnesota club. Two of the Raiders’ three wins have also come against quality opponents – Indianapolis (which just beat the Chiefs) and now Chicago.

With that in mind, Oakland can be forgiven for not putting up the best team stats.

In addition to Jacobs’ emergence as a quality NFL back, the Raiders can be excited about Carr’s start to the season. Through five games, Carr has thrown for 1,117 yards, six touchdowns, and three picks.

If the team surrounding Carr can continue to produce, the quarterback’s steady performance could be enough to get Oakland to the postseason.

The Raiders’ Chances By The Odds

We’ll know more about the Raiders in the next three weeks, as they head into a bye week before a pair of tough games against the 4-1 Packers and 3-2 Texans. If Oakland comes out the other side of those matchups with a 5-2 record, playoff football will look very likely.

For now, the Raiders are 3-2 and sit in second in the AFC West.

A week ago, the Chiefs were heavy favorites to win the division with -550 odds. The Chargers, who fell to 2-3 after a loss to the Broncos on Sunday, were sitting on odds of +425. The Raiders, who now look like the second-best team in the division, had odds of +1800 to win the AFC West.

While the Raiders are likely to hop over the Chargers, and the Chiefs are likely to pull back closer to the pack, the AFC West is still very much Kansas City’s to win.

The Raiders entered the month of October with +7700 odds to win the AFC, which wasn’t even in the top 10 of the conference. While Oakland’s odds are sure to improve in this regard as well, there are still plenty of teams with better odds.

Unless Oakland can take down Green Bay and Houston over the next few weeks, the odds aren’t telling you to believe in a Raiders playoff run just yet.