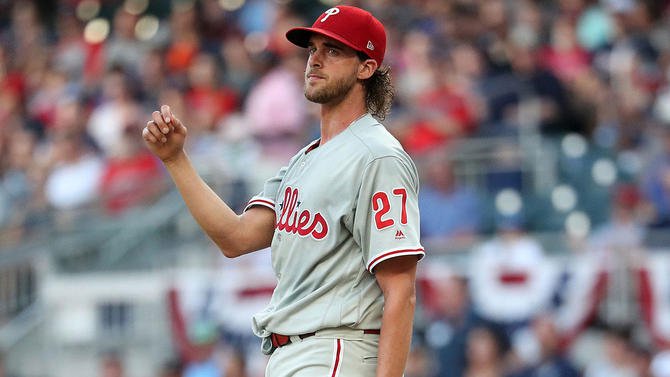 The National League schedule is light to start the week. There is really no series other than Brewers vs. Mets that captivates the mind and we covered that one yesterday in yesterday’s MLB betting previews. Today we are looking at a couple of teams that have to decide are they in or are they out?

For Philadelphia, they want to be in but they are having another snake-bit season. Other than pitcher Zach Wheeler, there is nobody on the team who is having all that good of a season. The only thing that is providing some optimism right now is that they are healthier than they have been in some time. They look poised to surge.

For the Cubs, they are mired in a funk. They have lost ten games in a row since they no-hit the Dodgers, sinking their chances in the NL Central. It also affects their chances to deal some of their pending free agents, many of who are slumping. In last night’s series opener against the Phillies, manager David Ross was ejected. Could he be in the firing line soon?

Philly took the series opener last night and can get in the race if they start beating teams they should on their schedule. They could not be getting Chicago at a better time than right now.

Odds are via FanDuel Sportsbook as of Tuesday, July 6 at 11:23 am ET. For MLB betting odds for today’s other matchups, check out our MLB odds.

The Phillies start the day in fourth place in the NL East, but they are only 4.5 games behind the Mets. Have they shown they can get on a run? No, but they still have the second half to try and get there. 2B Jean Segura and SS Didi Gregorius are back in the lineup after injuries. They scored 13 runs last night in the win over the Cubs, thanks to five homers. It helped to play at Wrigley Field, but perhaps this team is ready and healthy to start hitting as they can.

If they are going to get back into the race in the NL East, the offense is going to have to carry one of the worst bullpens in the Majors. Free-agent acquisition Archie Bradley has not given them what they need, but getting bullpen help at the trade deadline is the easiest thing to acquire. If they can get one or two guys that pop that could make the difference.

Slumping Cubs…Where Can They Turn?

If there is a positive for the Cubs, it is that last night’s loss is an outlier in their losing streak. They are not getting trounced, as half of those losses have been by just one run, including three straight games against Cincinnati. Chicago is just struggling to get the big hit or the big out when they need it. The team is hitting .224 as a team, which is 28th in the league.

Unfortunately, pitching might not be the answer either. The Cubs no longer have a guy like Yu Darvish, someone who can just overwhelm an opponent with their stuff. Their rotation is mostly guys who cannot afford to make mistakes and those types of arms are not the best for streak busting. It is hard to have a lot of faith in the arms they are putting forward most days, especially today.

Aaron Nola Home vs. Away:

Jake Arrieta Home vs. Away:

Aaron Nola is one of the reasons to be optimistic about the Phillies. He can be a lot better than he has been this season. It is hard not to like him in this matchup with the Cubs, a team with a lot of righthanded bats that are struggling. Arrieta is just plain done in my books. Chicago took him on sentimentally but the Phillies know what he is and is not capable of. They had for the last three seasons and he got progressively worse.

Phillies vs. Cubs Best Bet – Phillies RL: There is a lot to like about Philly in this matchup, which is why I think the run line is the play. For starters, the Cubs are a mess right now and I like the way that Nola matches up with them even if they weren’t. Philly should be able to hit Arrieta hard and often, and with the guaranteed at-bat at the top of the 9th the run line is a great value.