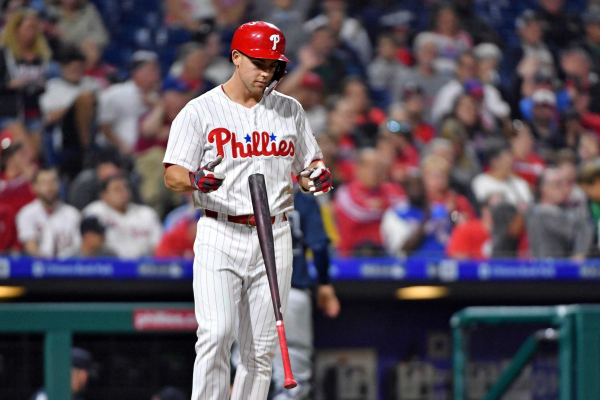 It’s an NL East showdown this evening, as the PhiladelphiaPhillies (7-4, 2nd NL East) are in South Beach for the start of a series against the Miami Marlins (3-10, 5th NL East). Philly will send out the veteran Jake Arrieta, while Miami will counter with Sandy Alcantara.

With the Phillies big favorites to win tonight at -165, here is a brief look on both teams, along with a prediction.

We’ll start with Arrieta, now in his second season with the Phillies. The 33-year old former Cy Young winner is 1-1 with a 2.77 ERA and a 1.31 WHIP with seven strikeouts. He’s gone six innings or longer in both of his starts this season, each of them at Citizens Bank Park.

The Marcell Ozuna trade Miami made with the Cardinals last year netted them a few prospects, highlighted by Alcantara. In his second season with the Marlins, the 23-year old Alcantara is 1-0 with a 1.50 ERA and a 1.08 WHIP to go along with six K’s. He struggled at Atlanta in his last start, going just four innings and walking five. But in his only home start this season, he went eight shutout innings against the Rockies.

Coming off one of the best offseasons in recent memory, the Phillies have delivered on high expectations. So far, Philly is sixth in runs scored, as well as top 10 in home runs and slugging percentage. First baseman and cleanup hitter Rhys Hoskins has been at the center of the power surge, hitting five home runs with 15 RBIs to lead the team.

Of course, the main attraction on the Phillies is Bryce Harper. Harper is continuing his run of good Aprils, hitting .314 with four home runs. Newcomers Jean Segura and Andrew McCutchen have also been consistent on base threats, while Odubel Herrera leads Philadelphia with a .317 batting average. This will also be J.T. Realmuto’s first game back in Miami after being traded this offseason.

Arrieta is a horse who can easily go six or seven innings strong. But past him, there are some question marks in regards to their bullpen. Both David Robertson and Seranthony Dominguez, the two initial pitchers expected to fight for closing duties, have each struggled. Pat Neshek, Hector Neris, and Juan Nicasio are some other arms Philly has been relying on in the late innings.

The rebuilding Marlins are throwing this season and perhaps the next couple of seasons out in the hopes of building long-term success. But it’s going to be a long year in Miami, as the Marlins are already 3-10, including four straight losses. They are 29th in runs and rank near the bottom in almost every offensive category, but pitching has been a pleasant surprise, ranking right in the middle across the board.

Arrieta will be going up against veterans Starlin Castro and Neil Walker, as well as young players Brian Anderson and Lewis Brinson. The biggest threat in the Marlins lineup so far has been catcher Jorge Alfaro. Alfaro, who came over from Philly in the Realmuto deal, leads Miami with three home runs, six RBIs, and a .645 slugging percentage.

The Phillies are a threat to win the NL East, while the Marlins are a threat to lose 100 games. Alcantara will keep Miami in it, at least for a little while, but Philly’s bats will prevail and Arrieta will earn his second win of the season. Take the Phillies -165 to win.