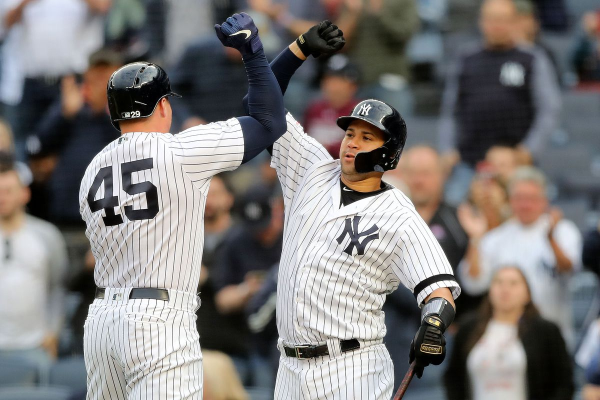 Due to inclement weather on Monday, there will actually be a day/night doubleheader between the New York Mets (32-33) and the New York Yankees (40-24) on Tuesday. For this article, I will be focusing on the evening game, not the makeup game. Coming into this series, the Mets currently sit in third place in the NL East, five games back of the Philadelphia Phillies (four games back of the Braves for second).

For the Yankees, despite a plethora of early-season injuries that have decimated their roster, they sit just ½ game behind the Tampa Bay Rays. For the evening game Tuesday, the pitching matchup features Jason Vargas (2-3, 3.57 ERA) going for the Mets while James Paxton (3-2, 3.11 ERA) will take the bump for the Yankees. Game time from Yankee Stadium is scheduled for 7:05 pm ET.

The moneyline for this one features the New York Mets at +165 and the New York Yankees at -175. The over/under for total runs scored is set at 9.

Offensively, the New York Yankees currently sit fourth in the Major Leagues at 5.30 runs per game (4.64 at home). This is pretty remarkable given the injuries to players like Aaron Judge, Giancarlo Stanton, and Miguel Andujar. For the Mets, they come in at 19th overall at 4.60 runs per game (4.20 on the road).

Despite being under .500, the window is wide open in the NL East with neither the Phillies nor Braves running away with the division. Trying to get the win in the nightcap will be Jason Vargas. The veteran southpaw is 2-3 in nine starts with a 3.57 ERA, 1.35 WHIP and opponents are hitting .247 against him. In 45.1 innings, he has allowed 42 hits, 18 earned runs, five home runs and has struck out 37 versus 19 walks. Despite a rough start to the season, he has pitched better of late. In his last outing, a 7-0 win over the Giants, he threw a complete game, allowing five hits and one walk while striking out eight.

The one weak spot for the Yankees has been the starting rotation, an area that they will likely look to upgrade around the trade deadline. Taking the bump for the Yankees Tuesday night will be lefty James Paxton. On the season, Paxton is 3-2 in nine starts with a 3.11 ERA, 1.17 WHIP and opponents are hitting just .213 against him. In 46.1 innings, he has allowed 36 hits, 16 earned runs, four home runs and has struck out 63 while walking 18. For Paxton, it’s not about ability, it’s about staying on the field healthy, something that he has struggled with over his career.

For full disclosure, I actually anticipate the Yankees taking both games of the doubleheader on Tuesday, but I really like their chances in the night game. While Jason Vargas has thrown better as of late, I still like the chances of the Yankees’ hitters against him. Look out for Aaron Hicks, Didi Gregorius, and Brett Gardner, who are all hitting .308 or higher in their careers against Vargas and have each homered. Regardless, I think Paxton will throw well or at least well enough to get to the Yankees’ vaunted bullpen. For my money, I am taking the Yankees at -170.