Nationals Just One Win Away From First World Series 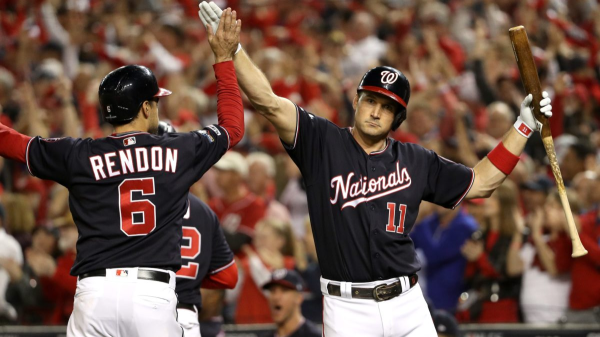 As the first three games of the National League Championship Series have come and gone, it appears the St. Louis Cardinals may have given everything they had in order to get by the Atlanta Braves in the National League Division Series. With an 8-1 victory on Monday night, the Washington Nationals have moved within one win of eliminating St. Louis and punching their ticket to the World Series.

Using a four-run third inning and never looking back, Washington dominated the Cardinals once again in Game 3, with a nearly flawless performance from Stephen Strasburg. In the end, Strasburg allowed seven hits and one unearned run while striking out 12 batters over seven innings.

Meanwhile, the Nationals bats handed Cardinals starter Jack Flaherty a 9.00 ERA by racking up four runs on five hits in just four innings. Anthony Rendon continued his outstanding form with a 2-for-3 performance that included a double and an RBI.

It wasn’t until the seventh inning that St. Louis put a run on the board – the team’s lone run of the game. Through three NLCS games, the Cardinals have now been outscored 13-2 by the Nationals.

Now, with the dominant pitching on the Washington staff having been too much to overcome through the first three games of the series, St. Louis will need a near-miracle to come back from a 3-0 deficit.

After erupting for 10 runs in the first inning of Game 5 against the Braves in the NLDS, the Cardinals have looked inept on offense. Facing Anibal Sanchez and then Max Scherzer in Games 1 and 2, St. Louis didn’t record a hit in the game through the first six innings in either game.

For the Cardinals, only Marcell Ozuna (two), Jose Martinez (four), and Paul DeJong (three) have multiple hits in three combined games. Ozuna, who leads the team with five RBI in the postseason, is batting just .167 without a single RBI in the NLCS.

Paul Goldschmidt has been completely ineffective against Washington’s pitching thus far, going 1-for-12 and striking out a team-high six times. Goldschmidt leads St. Louis with two postseason home runs but looks far from adding a third at this point.

On the other hand, the Nationals have been terrific from the mound. All three starters – Sanchez, Scherzer, and Strasburg – can boast a 0.00 ERA despite pitching at least seven innings each. Strasburg allowed seven hits, but Sanchez and Scherzer allowed only a single hit in their respective outings.

That pitching dominance has translated into a 3-0 series lead, and the Nationals are now just one win away from a World Series appearance.

Facing elimination, the Cardinals will go into Game 4 of the NLCS with Dakota Hudson (16-7, 3.35 ERA) expected to get the start. Hudson will be up against Nationals left-hander Patrick Corbin (14-7, 3.25 ERA).

Hudson’s postseason debut in the NLDS concluded with four runs allowed, although just one was earned, over 4 2/3 innings of work against Atlanta.

Although Corbin’s first playoff start ended in a loss, he struck out nine batters and allowed two runs, one earned, over six innings.

Focusing on Game 4 alone, the Nationals are favorites to win and advance with -153 odds. Although not overwhelming, those odds show that Washington holds an advantage on the mound and in their current offensive form.

When it comes to potential World Series matchups, any combination including the Cardinals is a big longshot. Of the four possible outcomes, a Cardinals-Astros series holds odds of +2000, and a Cardinals-Yankees matchup is even more unlikely with +2400 odds.

Meanwhile, the most likely matchup is Nationals-Astros at -130, leaving the Nationals-Yankees series with +135 odds.

So while Game 4 isn’t a lock for Washington, a World Series berth nearly is.