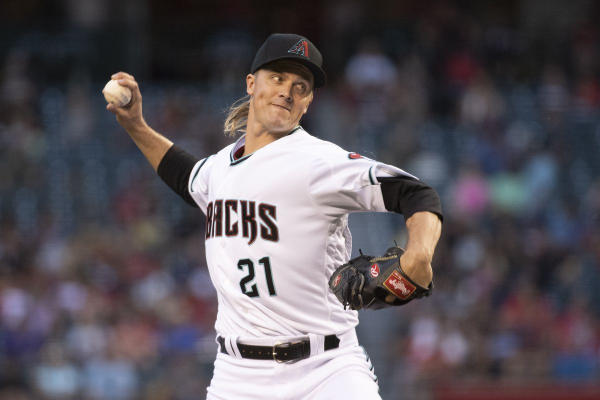 Another Friday night in baseball means that we have another evening with massive slates and major prize pools across the industry. This slate is very intriguing to me from a two-pitcher standpoint, so we will be focusing on DraftKings for the most part today.

This pitching slate is really awkward due to the lack of high strikeout options in the top tier. I expect a lot of ownership to fall onto Zack Greinke, and I expect to have a lot of him myself.

Greinke gets an elite matchup in Miami taking on the Marlins, and this is a spot where I could see Greinke flashing his upside. Greinke isn’t a pitcher that goes out and throws six dominant 11-K innings, but he is able to limit hard contact and go deep into games. I expect this to be the case tonight, and I think that the lack of power from the Marlins side makes him safe in all formats.

I really don’t want anything to do with any other pitcher over $9,000 tonight on DK, but Michael Pineda would likely be my second choice. Pineda has elite strikeout stuff if he is on, and the White Sox are not a good offense. The White Sox have enough pop to hurt Pineda, but an A-game performance out of Pineda would likely lead to an elite score here.

James Paxton is my favorite large-field GPP play on the night if you are looking for unowned upside. Paxton gets a really tough matchup going into Fenway, and he hasn’t looked very good recently. The thing that gets me on Paxton is his elite upside, and his ability to show up vs. elite teams.

Earlier this year, Paxton threw an eight-inning, two-hit shutout with 12 Ks against Boston. I don’t expect this tonight, but Paxton certainly has these performances in his back pocket.

Joey Lucchesi is the chalk mid-tier pitcher on DK, and I don’t really think I will go there too much tonight. I get the appeal, but Lucchesi just hasn’t flashed a ton of upside, and the Giants are getting a park upgrade. I like Lucchesi in this spot overall, but I think that my roster construction will leave him out of most lineups tonight.

Jose Urquidy is my favorite pitcher on this slate by a mile, and I think I will be significantly over the field in all formats. Urquidy is the cheapest pitcher on the slate, and he has upside to be a top overall scorer.

Urquidy posted a K/9 over 12, and he also doesn’t possess control problems that most do at this point in their career. The Cardinals have been playing much better lately, but they are not very good against right-handed pitchers. I expect Urquidy to be owned a lot tonight, and I will DEFINITELY still want to be way over the field here.

Daniel Norris is another cheap option that is viable in this spot. Norris has some level of talent, but he is not anywhere close to Urquidy from that standpoint.

However, Norris does get a park upgrade and should see a lineup that will strike out a lot. I expect to play these two cheap players together more than the field tonight and load up on bats.

On a slate where I think I will be looking to eat a lot of chalk at pitching, I need to be a little bit different with my bats. The Yankees don’t project to be incredibly high-owned, and I want to supplement that stack with mini-stacks or one-offs from lineups with good matchups for individual hitters.

I really like right-handed power from the Blue Jays with players like Guerrero Jr., and Grichuk. I want pieces of left-handed Braves against Arrieta, who has massively struggled with lefties since the start of 2018. I also will be looking to sprinkle in Twins, Orioles, Tigers, and Dodgers into these stacks.