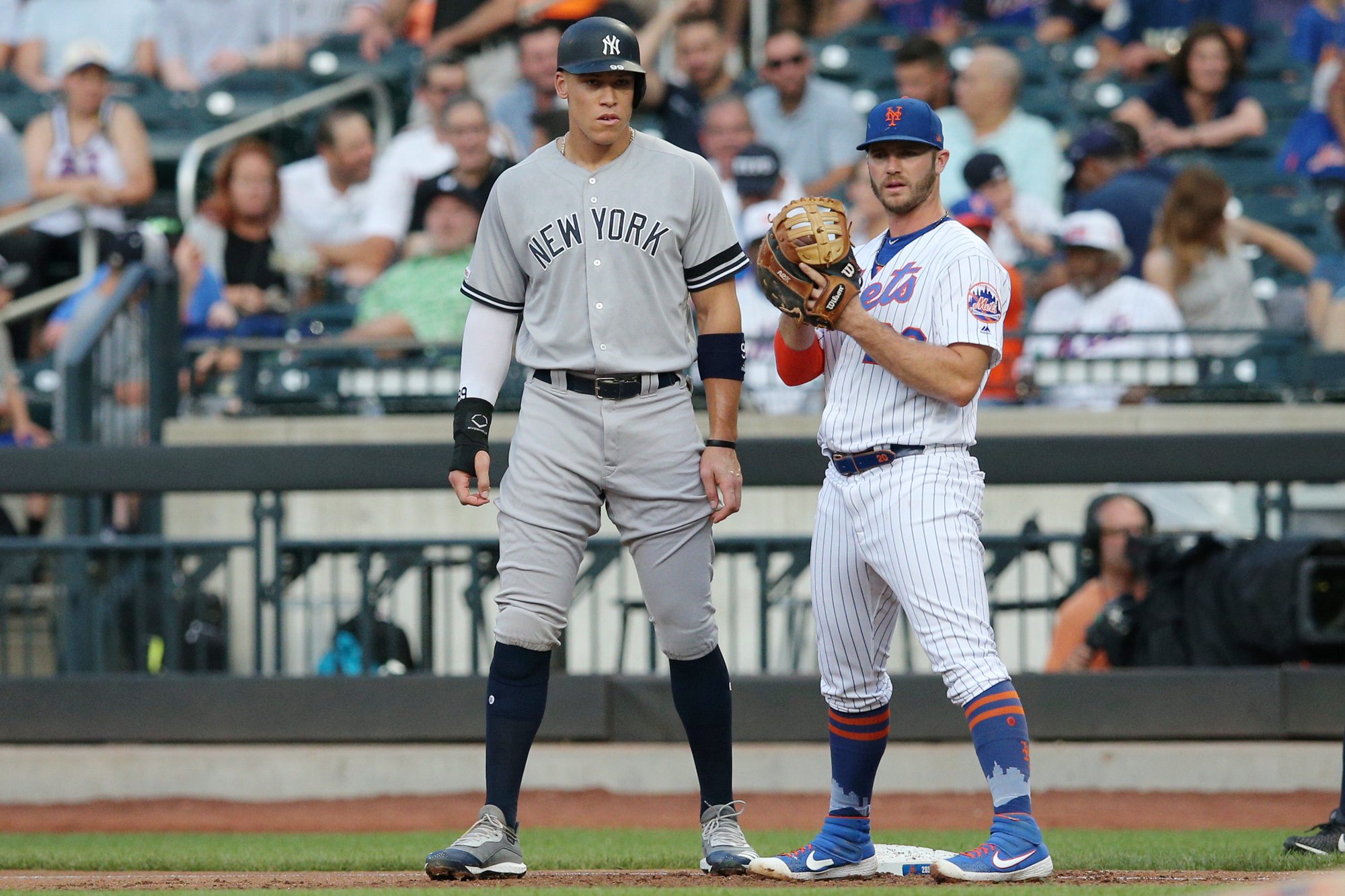 With the turn of the calendar, we are truly into summer now. July is always a big month with the All-Star Game and MLB trade deadline, and there are some interesting series this weekend to make the holiday weekend a busy one for MLB betting.

Sure the Mets vs the Yankees is going to suck the oxygen out of the MLB room but if you can look at it objectively you have a first-place team heading to the Bronx. That always gets folks' attention, even more so this weekend.

The Dodgers' visit to Washington features the last two World Series Champions. Even if that were not the case, the hot bat of OF Kyle Schwarber has made Washington the talk of baseball this month. This is a big series to see just what the Nationals are made of.

Those are the headliners, but don’t forget to check out the Red Sox vs A’s series. That is a possible playoff preview too.

Neither of these teams is heading into this series in particularly good shape. The Mets got walloped on Wednesday losing 20-2 and then lost again last night 4-3 against Atlanta. Though he did not take the loss the game was started by Jacob deGrom, and he has usually been money for the Mets. They had won eight times in a row with their ace on the hill.

The Mets’ lineup is still underperforming. Even with OF Michael Conforto back in the lineup, scoring as many as even four runs in a game has been a challenge. He has just 2 RBIs in 9 games since returning and the team is only 4-5. With the Nationals suddenly hot on their heels, the Mets need some results this weekend.

The Yankees were off yesterday, and boy did they need it. They dropped two of three to the Angels, including a seven-run, ninth-inning meltdown in Wednesday’s series finale. Closer Aroldis Chapman was smacked around for four runs, but that happens a few times a year. The Yankees have had one of the best bullpens in the Majors all season long and I don’t expect that to be a trend.

One trend they do need to reverse is their lack of productivity at the plate. The Yankees are up to 10th in homers, but I think we are all surprised that they are just 21st in runs scored this season. The games this weekend might be pretty low-scoring.

Maybe it takes a champion to stop one. This is a notable game and series with both teams in good form. Last night L.A. got the series-opening win scoring 5 runs in the top of the fifth in a game that was called early.

Lefty Julio Urias has the highest ERA amongst L.A.’s starters, but he also is tied for the team lead with nine wins. He has been showing more dominance this season but has also been giving up more homers too. The Dodgers are 12-4 in his starts this season, and a lineup that is 4th in scoring gives him more margin for error.

After yesterday’s loss, the Nationals were 7-3 in their last ten. I know all the talk has been about the amazing power display from Kyle Schwarber, but the team has been winning too and is now over .500 and pushing the Mets. He has been a fun story, but June is over. Now the Nats need Juan Soto to step up as well.

Starter Max Scherzer had a pretty hot month of June too. He made three starts, never giving up more than one earned run (one game he left after throwing just 12 pitches and was not counted). His ERA is lower than it was during any of his Cy Young seasons, and were it not for deGrom he would be a leading candidate this year. He is totally wired for big games like this one too.

Dodgers vs Nationals MLB Betting Tip: The Nationals are underdogs for just the third time this season with Scherzer on the hill. The fact that they are 0-2 in the previous games does not scare me away, however. He has given up just one run in each of those ballgames, and the offense is much better now than in April and May.

Yes, this is a mismatch on paper with the White Sox atop the AL Central. After a bit of a rough patch, the White Sox have won four in a row doing what they do best, beating up on weak teams. The most recent example is this week’s sweep of the Twins.

With the Indians’ Shane Bieber hurt the Cy Young race in the AL looks wide open right now. Lance Lynn is definitely a contender. He is short a few innings to qualify right now, but his ERA would be second in the American League. With the White Sox winning as they have been, he should be able to post a great record. He has already beaten Detroit once this season.

Detroit is not going to threaten Chicago in the standings, but they are 6-4 in their last 10 and in one of their best stretches of the season. The offense is still a struggle, but the pitching has gotten very respectable. In a recent series split with Houston, they held the Astros to three runs or less in three of four games.

One of those games was started by righty Casey Mize. The Tigers have won his last three starts and are 7-3 in his last ten starts. One of those losses was to Chicago in a game where they tagged him for a few homers over 7 innings of work.

White Sox vs Tigers MLB Betting Tip: Fading the White Sox against Detroit is a tough call. But Mize has been their best pitcher, and the White Sox are only 17-18 on the road. It might be tough to pull the trigger on Detroit, but the value is there.

Rivalries renew this weekend between these two AL East teams. Tampa is not in the best form heading into the weekend, but the last time they played the Jays they swept them. In the season series, they own a 5-2 advantage.

Rays rookie lefty Shane McClanahan has been just okay this season. You see the potential, but the consistency is not there yet. He has faced the Jays once this season and was effective in a win. He did not get a decision that day and has yet to record a road win.

Toronto had a good close to June, but the start of July was a disappointment with a loss to Seattle on Canada Day. But there is still lots of reason for optimism with what might be the best lineup in baseball and a hopefully healthy relief corps.

Ross Stripling isn’t an ace, but his in-season transformation has been amazing. They kind of need him too with the rotation so lefty-heavy at the moment. In his last eight starts, he has given up more than two runs only once. One of those games included 7 shutout innings against the Rays.

Rays vs Blue Jays MLB Betting Tip: Stripling does not get much respect from the market, so Toronto is the value play here. That Jays' lineup against lefties can be devastating too.

Boston begins the weekend a few games clear of Tampa in the AL East. If they are going to stay there, they are going to have to play well this weekend. They are 10 games over .500 on the road, which is tops in the Majors. Let’s see how that lineup fares in Oakland’s big stadium.

Garret Richards is an example of where the Red Sox need to improve. The ERA of the starters is 4.50, so he is not alone. But that is where the team needs some improvement. Richards’ ERA drops by nearly three runs on the road, so he may be a better bet away from Fenway.

Oakland is not in great form right now, having lost a series against Texas to start the week. They have slipped below Houston in the AL West, which should be a great battle all season long. 3B Matt Chapman already has 100 strikeouts on the season, but he is also hitting better lately, posting a 16-game hitting streak in June.

Lefty Cole Irvin might be the weak link in the Oakland rotation but has his moments. In his last start, against the NL’s best team, he held the Giants scoreless for 8 innings in a win. It was just the second time all season he has thrown 100 pitches. The first time he was just okay the next time out.

Red Sox vs A’s MLB Betting Tip: This series is going to be a lot of value on both sides with two good teams going at each other. Oakland might win the series, but this looks like the game to fade them.

The Cubs are sinking fast in the NL Central. By the time this game starts these teams could be in a position to switch places in the standings. Not making anything any easier is the fact that 3B Kris Bryant and 1B Anthony Rizzo have been hurt. They are cornerstones of the team, literally, as well as guys that might be being shopped for future value due to their contract situations.

Righty Kyle Hendricks is one of just two pitchers with ten wins heading into the weekend. He never really impresses anymore, but he is as steady as can be. He is 5-1 away from Wrigley Field this season.

Cincinnati is one of the most frustrating teams in the Majors. So many times they have mashed opponents into submission, but then there are games where their offense is just a shell of itself. They were able to carry a little momentum into this series as they took the final game of their three-game set against San Diego on Thursday.

I have to admit I was down on lefty Wade Miley coming into the season. He has kept his walks and homers in check though and been a very consistent starter for the Reds all season long. He beat the Cubs back in April and looks like a good bet to do it again.

Cubs vs. Reds MLB Betting Tip: I am looking for a price of about even on this one. In that case, definitely go with the home side. You can bet them up to -120 or look to take the Reds on the team total. Anything 5 or under looks like good value to me.