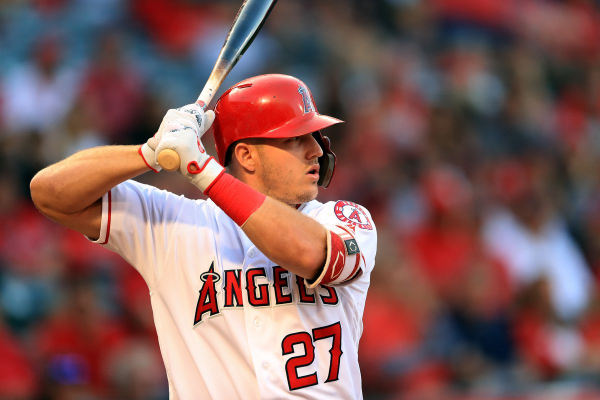 Thursday night features a matchup of AL East versus AL West when the Toronto Blue Jays (14-16) travel to Angel Stadium to take on the Los Angeles Angels (14-17). This is the final game of a three-game series that has seen the Angels take the first two. While both of these teams come in under .500, there is still plenty of hype surrounding both.

For the Angels, they have arguably the best player in the game and one of the best to ever take a field in Mike Trout, while the Blue Jays feature Vladimir Guerrero Jr., arguably the most hyped prospect in baseball since … well, Mike Trout. The pitching matchup for this one will feature Aaron Sanchez (3-1, 2.32 ERA) taking the mound for the Blue Jays opposite of Angels lefty Tyler Skaggs (2-2, 3.15 ERA). First pitch for this contest is scheduled for 10:07 pm ET.

The moneyline for Thursday’s game is set at the Toronto Blue Jays +130 and the Los Angeles Angels -140. The over/under for runs scored is set at 8.5.

Just a month into the season and the Blue Jays already sit 5 games out of first place in the AL East. While a team like the Red Sox has been equally as bad, the Blue Jays just don’t have the firepower in their lineup for people to assume they could make a run at a division that also features the defending champions, the Yankees and the Rays. With that in mind, this rebuilding season is all about maximizing value and seeing development in the youngsters.

It would not be surprising to see the Blue Jays become sellers sooner rather than later and players like Marcus Stroman, Justin Smoak and Tuesday’s starter, Aaron Sanchez, available. On the season, Sanchez is 3-1 in 6 starts with a 2.32 ERA, 1.32 WHIP and opponents are hitting just .196 against him. In 31 innings, Sanchez has allowed just 21 hits, 8 earned runs and has struck out 27. One issue that has plagued him early on, though, is walks, as he has allowed 20. He will look to keep a good start to the season going on Tuesday against the Halos.

Offensively, the Blue Jays aren’t particularly deep. Freddy Galvis has probably been their most consistent hitter, hitting .313/.333/.510 with 5 home runs, 12 runs batted in and 14 runs scored. Justin Smoak and Brandon Drury also have 5 home runs apiece, while Rowdy Tellez has 6, but this lineup isn’t the most intimidating 1-9.

Still, one player that has created a lot of buzz for the organization is Vladimir Guerrero, Jr. While he has gotten off to a slow start (hitting .214/.353/.286 going into play Wednesday), he is still worth the price of admission for his pedigree and the skillset that he has shown he has. Throw in the fact that he is playing against a team that his dad had a ton of success on, and there is a lot of nostalgia in this road trip.

Angels Trying To Build Around Trout

Every year it always remains the same. The Angels have the best player in the game in Mike Trout, but little else to give him support or a chance at a deep postseason run. This year their pitching has been pretty suspect as they currently rank 22nd in the majors in earned run average at 4.75. While that isn’t going to get it done against most teams, Thursday’s pitcher Tyler Skaggs has been pretty decent in the early going.

Thus far this season, Skaggs is 2-2 with a 3.15 ERA, 1.25 WHIP and opponents are hitting .267 against him. In 20 innings, he has allowed 20 hits, 7 earned runs, 4 home runs and has struck out 19 while walking 5. He has certainly been the best of the rotation thus far, but when the others include pitchers like Matt Harvey, Trevor Cahill and Chris Stratton, that isn’t saying a whole lot.

On the offensive side, Mike Trout continues to rake. Going into the game Wednesday, Trout was hitting .294/.487/.565 with 6 home runs, 16 runs batted in and 19 runs scored. Most amazing is the fact that he has walked (29) over twice as many times as he has struck out (14). What did he do in his first three at-bats on Wednesday, he went 2 for 3 with three runs batted in.

The problem is that there isn’t a whole lot else around him offensively. Albert Pujols is closing in on a career milestone of 2,000 runs batted in, but he is a far cry from the player he once was. With players like Shohei Ohtani and Justin Upton on the shelf, there just isn’t a whole lot of protection for Trout.

Both of these pitchers have had respectable seasons thus far, but in terms of ability, I have always been a believer in Aaron Sanchez. This season it has mostly been about taming his wildness, but he still does a nice job of missing bats.

I will be honest in saying there isn’t a whole lot that is screaming out as an advantage for either team for me in this one, which pushes me to take the underdog with the better moneyline. For my money, I will be banking on Sanchez pitching well and maybe seeing that first game where Vlad Jr. finally goes off a little. I am taking the Blue Jays +130.