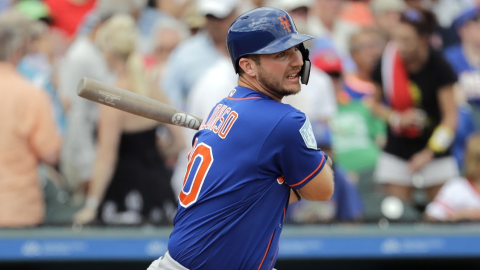 Saturday features a battle of NL East versus NL West as the New York Mets (28-29) take on the Arizona Diamondbacks (28-30) at Chase Field. This matchup features a pair of teams that have both had disappointing starts to their season as they both sit under .500 and well off the pace within their respective divisions.

In the first game of this three-game series, the Mets were able to hold on for a 5-4 win. Christian Walker and Ketel Marte both had home runs for the Diamondbacks in the loss while Zack Wheeler went seven innings, allowing four earned runs and striking out nine in the win.

The moneyline for this one features the New York Mets at -105 and the Arizona Diamondbacks also at -105. The over/under on runs scored is set at 7.5.

Offensively, the Arizona Diamondbacks come in as the stronger of the two teams. They currently rank eighth in the majors in runs per game at 5.25 (4.71 at home). For the Mets, they fall to 19th overall with 4.62 runs per game (4.25 on the road).

Mets Looking For Two In A Row

As the calendar switches over to June, the Mets are looking to reverse their fortunes. They currently sit in third in the NL East, six games behind the Philadelphia Phillies. Trying to get the month started off on the right foot will be Jacob deGrom.

The former Cy Young Award winner is currently 3-5 in 11 starts with a 3.71 ERA, 1.17 WHIP and opponents are hitting .231 against him. In 63 innings, he has allowed 56 hits, 26 earned runs, nine home runs and has struck out 77 versus 18 walks. In his last outing, a 9-5 loss to the Dodgers, deGrom was solid, going five innings, allowing seven hits, one walk, and two earned runs while striking out just two. He will look to build on that in Saturday’s matchup.

Offensively, Peter Alonso continues to make a case for NL Rookie of the Year. He is currently hitting .265/.341/.625 with 19 home runs, 43 runs batted in and 34 runs scored. In fact, he leads the Mets in all three of those categories. The only other Mets hitter who has double-digit home runs is outfielder Michael Conforto with 10. Between Alonso, Conforto and Wilson Ramos, the Mets will hope that they can get some runs off of Diamondbacks’ starter Zack Greinke.

With one of the hottest teams in baseball, the Los Angeles Dodgers, in their division, the Arizona Diamondbacks understand they don’t have a whole lot of wiggle room to not play well. Unfortunately sitting under .500, they are already 10 games back and fourth in the NL West.

Trying to turn around their fortunes on Saturday will be ace Zack Greinke. On the season, Greinke is 6-2 with a 2.78 ERA, 0.88 WHIP and opponents are hitting .204 against him. In 77.2 innings, he has allowed 57 hits, 24 earned runs, and 10 home runs and has struck out 73 versus 11 walks. He will be looking to mimic his solid stat line against the Mets Saturday.

Offensively, David Peralta is quietly putting together another nice season. He is currently hitting .309/.357/.524 with seven home runs, two triples, 30 runs batted in and 28 runs scored.

In the last 30 days, though, probably the hottest Diamondbacks hitter has been Eduardo Escobar. In that span he is hitting .287/.331/.609 with nine home runs, three triples, 28 runs batted in and 19 runs scored. Going against the likes of Jacob deGrom on Saturday, the Diamondbacks will need contributions from all of their offensive weapons.

This one really is a flip of a coin. Both of these pitchers have the ability to not only go deep in a game but to also completely shut the opposition down. With that in mind, my decision comes down to season trends, which have been more favorable for the Diamondbacks. deGrom has pitched well as of late, but overall Greinke has been the better pitcher this year.

Furthermore, the Diamondbacks’ offense has a little more potency than what the Mets (except for Peter Alonso) have shown. You could certainly make the argument for either side in this one, but for my money, I am taking Arizona at -105.