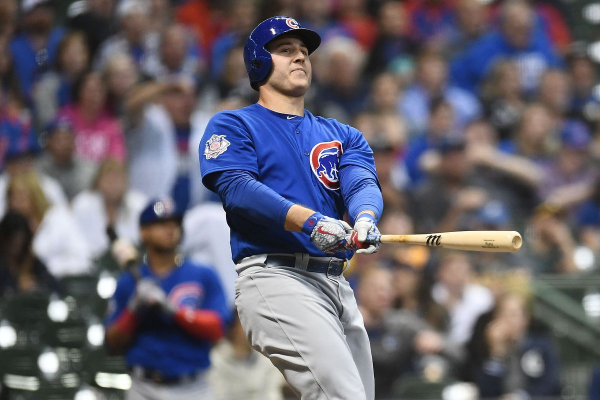 The Milwaukee Brewers and the Chicago Cubs are set to square off for a three game series at Miller Park beginning on Monday. The Brewers currently lead the Central Division by .5 game over the Cubs, but the Cubs have closed the gap in recent weeks.

Both the Cubs and Brewers were predicted to compete for a playoff spot in 2018, and it looks like their divisional battle will last all season long. The Cubs were able to blow past the Brewers towards the end of the 2017 season to win the Central Division. The Chicago Cubs are -127 over the Brewers in game 1 of the series.

Cubs Dominant Over Brewers in 2018

The Brewers might have a bigger divisional lead if it weren’t for the Chicago Cubs. The Cubs have dominated the Brewers this season, having won of 7 of the 8 matchups between the two teams. The Cubs know that their fans will travel with them to Miller Park, and they have had great success in the Brewers’ park in the past.

The Cubs pitching staff has been extremely consistent all season long. The pitching staff ranks second in team ERA so far in 2018 with a sparkling 3.15 ERA. Jose Quintana will get the start for the Cubs in the series opener. Quintana has dominated the Brewers in his career and is 1-0 against Milwaukee this season.

The Brewers have a very talented pitching staff, especially the back end guys in the bullpen. Josh Hader is putting up record setting strikeout numbers for the Brewers out of their bullpen. Junior Guerra will get the start for Milwaukee in the series opener and hopes to turn the ball over to Hader and company with a lead. Guerra has had success against the Cubs in the past.

Milwaukee must find a way to score more runs to stay atop the Central Division. The Brewers rank right in the middle of the pack in terms of batting average and runs scored in 2018. Milwaukee needs perennial All-Star, Ryan Braun, to get back to leading the offensive attack. Braun is hitting just .236 with only 6 home runs for the Brewers so far this year.

Junior Guerra will be tasked with trying to keep the Cubs offense at bay in the series opener. The Brewers don’t have the offensive talent to win a slugfest with the Cubs, but they have a huge advantage in the bullpen. The Brewers must find a way to beat the Cubs if they are going to win the Central Division.

The Cubs are starting to hit their stride and appear to be ready to take over the division lead. Chicago has a potent offense capable of scoring a ton of runs, but also feature one of the best pitching staffs in baseball. Look for Quintana and the Cubs dominance over the Brewers to continue on Monday night. Bet the Chicago Cubs -127 over the Brewers.