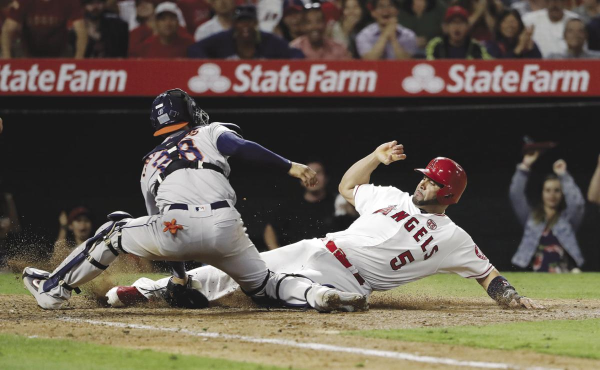 Tuesday will feature an AL West battle when the Houston Astros (59-36) take on the Los Angeles Angels (49-47). This is the second of a four-game series between the two teams that saw the Angels win the opener. Going into this game, the Astros currently lead the AL West by 5.5 games over the Oakland Athletics, while the Angels sit 10 games back of first place. The pitching matchup for this one will feature a bullpen day for the Astros (no official starter/opener has been declared yet) vs. Andrew Heaney (1-3, 5.18 ERA) for the Angels. First pitch for this one is scheduled for 10:07 pm ET.

At the time of this writing, the moneylines have not been posted for this game, so make sure to check in on those before game time.

On the offensive side, these teams are deadlocked in terms of runs scored, as they both average 5.16 runs per game. For the Angels, they average 5.34 at home, while the Astros average 5.19 on the road.

On the pitching side, it is the Astros that statistically have the advantage. They currently rank fourth in the majors in earned run average with a team ERA of 3.92 (3.92 on the road). For the Angels, they come in at 20th with a 4.84 ERA (4.44 at home).

When you put it all together, it is the Astros that come out ahead in terms of run differential. They rank fifth in run differential at +94, while the Angels rank 15th at +20.

It is certainly a tumultuous time right now for the Astros’ starting rotation. Yes, they have Justin Verlander and Gerrit Cole, who have been dominant despite being prone to giving up the long ball. They also have Wade Miley, who has been beyond serviceable, but then it has been a crapshoot.

On Monday, they went with Josh James as an opener ahead of the inconsistent Framber Valdez. On Tuesday, the plan at the time of this writing is to go with a bullpen day. This one really is going to be an “all hands on deck” type of day, particularly after the bullpen was used more than hoped in Monday’s contest as Valdez could only go four innings.

On the offensive side, the Astros have been showing signs of life, and a large part of that is because Jose Altuve has been starting to come around since returning from his injury. In the first four games after the All-Star break, Altuve hit .400/.400/.800 with two home runs, six runs batted in and seven runs scored.

If he starts playing like he is capable of, it takes a lot of pressure off of All-Stars Alex Bregman, George Springer, and Michael Brantley. Another player that just continues to hit is designated hitter Yordan Alvarez. In his first 23 games, he hit .244/.422/.733 with nine home runs, 29 runs batted in and 15 runs scored.

Unfortunately for the Angels, they lost their star player Mike Trout on Sunday with what an MRI revealed to be a minor calf strain. As a result, it is doubtful that Trout will play in this series with the Astros, especially as the Angels currently sit 10 games out of first place in the division. Still, with Trout down, the rest of the team will need to pick it up.

Coming into play Monday, Shohei Ohtani has probably been the Angels’ best hitter aside from Trout and the injured Tommy La Stella. In just 56 games and 207 at-bats, Ohtani is hitting .300/.355/.556 with 14 home runs, 39 runs batted in and 30 runs scored. Ohtani and the rest of the Angels will try to take it to the Astros bullpen on Tuesday.

On the pitching side, it will be Andrew Heaney getting the ball for the Halos. In eight games, he is 1-3 with a 5.18 ERA, 1.25 WHIP and opponents are hitting .224 against him. In 41 2/3 innings, he has allowed 35 hits, 24 earned runs, nine home runs, and has struck out 49 while walking 17. In his last outing, a 4-0 loss to the Astros in Houston, Heaney went five innings, allowing five hits, two walks, two earned runs and struck out five. He will look to give his team an opportunity to pick up a win and hold the Astros’ offense in check.

As previously mentioned, outside of Verlander, Cole, and Miley, the Astros’ rotation has been a mess. The fact that Tuesday was already planned to be a bullpen day was not helped by the fact that Framber Valdez couldn’t go deep into the game Monday. The Astros have solid arms in the pen including Ryan Pressley, Roberto Osuna, Colin McHugh, and Josh James, but the question is can all of them (as well as pitchers like Chris Devinski and Joe Smith) be consistent inning after inning for an entire game? While I definitely like the Astros team as a whole, I don’t like their fortunes in a bullpen game Tuesday. For my money, I am taking the Angels in this one.