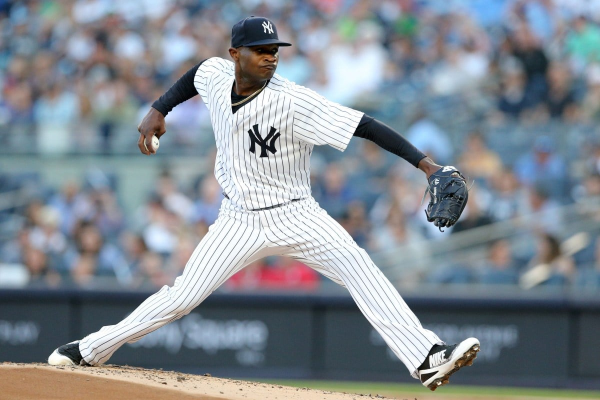 There are 13 games out there on most DFS sites tonight and that means we have a lot of options and a lot of ownership being spread out. Nights like tonight allow you to really key in on the guys that you find value in and mostly ignore ownership because the slate is too big for anyone to become super chalky. Pitchers are what really matters in MLBDFS because we are either playing them or stacking against them, so that will be the focus here.

My favorite pitcher on the slate is Domingo German and I am unsure exactly how much of a hot take that will be. I love German’s stuff and he has really not had a ton of walk problems this season. German has top 3 stuff on the slate and I would argue it IS the top of the slate. German has a slate leading 16.4% swinging strike rate on the season and that is significantly above anyone else playing tonight and he is 5th in the major leagues behind Clevinger, Snell, Scherzer, and Boyd. the Angels lineup isn’t strikeout heavy, but I think that German’s talent is just good enough to generate strikeouts vs. good contact teams.

If you were to look at last year’s swinging strike data, PatrickCorbin would be just ahead of Domingo German. Corbin is an elite arm and his stuff works pretty well at Coors Field. I would rather get a lefty against the Rockies if they can just maneuver around Story and Arenado, but that is obviously asking for a lot. Corbin has an elite slider and I think that pitch is enough to neutralize these two bats. If Corbin is low-owned due to Coors Field, I am in on him tonight as an elite talent in a below average matchup at a cheap price.

Erik Swanson is expensive on DraftKings, but he is reasonably priced on other sites and I think that he is a good play tonight. Swanson a decent prospect that does project to eventually be in a rotation with good strikeout stuff. Swanson isn’t a great pitcher by any means, but the Padres lineup is able to be gotten with good stuff and I think Swanson can have another nice outing tonight.

Trent Thornton has had a very up and down start to his major league career with two fantastic starts combined with two rough starts. I think Thornton is towards the good end of the middle of these results and I am in on him for two pitcher sites. Thornton has good stuff and he faces one of the worst lineups in baseball in my opinion. I love picking on the Giants and I expect Thornton to be solid to good tonight.

Homer Bailey is my favorite cheap pitcher if you are looking to save money on this slate. I am unsure of Bailey’s popularity after his two good performances in a row, but he is not usually a fan favorite. I have played significant shares of Bailey in each of his four starts and I will continue to do so if this is his price tag. Bailey isn’t great, but he was a former top prospect that still throws hard and has a good slider. This gives him real upside and I think the Rays lineup in Tampa isn’t too scary for this price tag. Bailey could get blown up, but so could all of these guys and I think he has just as much upside as anyone in his range.

Houston is interesting v. Michael Pineda because Pineda struggles to keep the ball in the yard. This is not my favorite stack, but it is an interesting GPP play.

The White Sox are in a phenomenal spot vs. AndrewCashner and the Orioles Bullpen. Cashner is bad, but the best part about stacking vs. Baltimore is getting to pick up even more runs vs. a terrible bullpen.

The Yankees stack is likely to go under owned because most people don’t even know who half of the team is. If I get to pick on Chris Stratton at low ownership, I will do so every single time. I like the regulars in the lineup along with Frazier, Tauchman, and Ford, who should all be lesser owned.

Seattle is an interesting leverage spot because I do expect Margevicius to get some ownership here. I think Margevicius is fine as a pitcher, but he isn’t someone that I want to play as the chalk. Seattle is a good offense and they could provide a ton of leverage tonight.