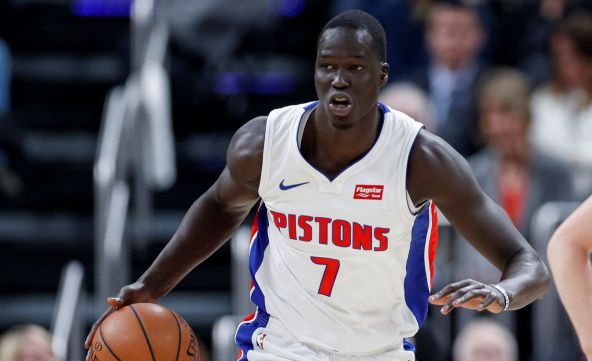 It is a relatively calm Wednesday night in the NBA with only six games on tap, but there is plenty to talk about when it comes to DFS plays tonight. As always, make sure you keep up with the news leading up until lock to create the best possible lineups.

Let’s talk about the three players with the highest projected ownership on the slate as of about noon eastern. This can always change, but taking a look at some of the guys at the top of the board is always important.

Thon Maker: Maker is the highest projected player on DraftKings in terms of ownership, and it makes sense with John Henson expected to be out. However, I will stay away from Maker in GPPs until his ownership comes down.

Maker is a great play from a raw expectation perspective, but at close to 50%, he does have a lot of room to bust.

Luka Doncic: Doncic is the premier pay up option on the slate, but this is another player that I would probably get under if I expect him to be 40% owned. Doncic is coming off of two great games of over 35 real points, but he is still the same (great) fantasy player as he has been all year.

Denver has been horrible defensively recently, but the pace should be slow in this game, with Denver being 29th in pace.

Danilo Gallinari: Gallinari is my least favorite of these three chalky options, and I may consider full-fading him outside of cash games. This is not because Gallo is a bad play, but because at this ownership, he can fail to win you GPPs at a much higher clip than the ownership suggests.

Play a Pelican or Two

I have been preaching about the Pelicans fantasy output since Zion’s debut, and I will not slow down anytime soon. They have four people that have 55+ point upside on any given night, and that number would make any of them a GPP winning option.

I understand that picking the right one can be tough, but if you don’t have him, you likely won’t be winning a GPP anyways. The Pelicans have had seven 50 fantasy point scorers in their last eight games, and they have shown the potential to have more than one in the same game.

If I were picking a Pelican, I prefer Lonzo Ball or Brandon Ingram tonight because of their increased minutes in the last game that have gone overlooked by almost everyone in the industry.

Before the last game, Alvin Gentry addressed the Pelicans’ struggles in crunch time and said that he wanted to adjust rotations so that Ball and Ingram play earlier in the fourth quarter.

This led to 22 minutes in the second half for Ball and Ingram. Ingram played 40 minutes in that game, and Ball played 35 while missing the last seven minutes of the first half due to foul trouble.

I think that you can project both of those guys for 38 minutes, and that is likely under what Gentry plans for them moving forward.

If you are looking for low-owned value, I like attacking the 76ers with the starting Pistons point guard. Now, we don’t know who that is yet, but once we get a starting lineup, I will feel confident putting either Bruce Brown or Brandon Knight in my lineup, assuming we get the news on time.