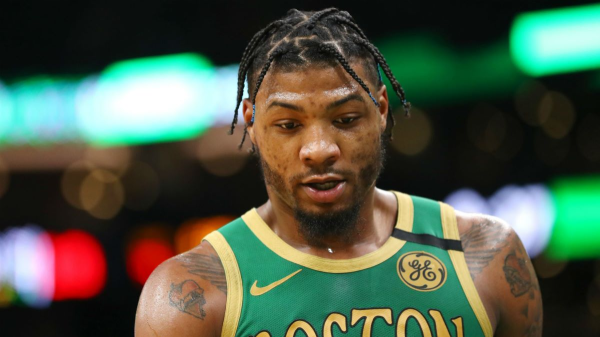 We have a nine-game slate on tap for this NBA Wednesday, and it is one of the craziest slates that we have seen all season. Things could very well change 10 different times before now and lock, so it is very important to keep up on the news leading up to lock.

The Boston Celtics were finally getting back their point guard, Kemba Walker, and last night, this team completely fell apart, and it looks like we could be without up to five Celtics tonight, depending on news.

Jayson Tatum missed last night due to illness, and we do not know if that was some sort of sneaky rest or if he is actually sick and likely out tonight.

Gordon Hayward said that he is likely out tonight, along with Kemba Walker. Jaylen Brown left the game last night due to what looked like a hamstring injury, and I don’t expect him to play right now.

Even Marcus Smart got into a heated argument with an official and could very well see a suspension.

This team is very different on FanDuel and DraftKings because of the pricing differences. If any of the four question marks play, I think that they are a great play on FanDuel, while I think that it may be hard to play any with confidence on DraftKings.

While Smart would have plenty of usage without the other four, paying $7,000 for Smart doesn’t feel great, even though I would project Smart for something like 40 fantasy points, making him a very solid play.

The clear value on this team would be in players like Javonte Green and Brad Wanamaker, who I expect to start for Walker and Hayward. The Celtics closed with Green, Wanamaker, Edwards, Ojeleye, and Theis with all five players unavailable.

I expect this to be their starting lineup today, with Smart replacing Edwards. While Edwards has not been overly productive this season while on the court, if he did start, I would expect him to be the clear scoring option over anyone that isn’t usually playing 30-plus minutes for this team.

I love Naz Reid because of his volatility, and I always force a percentage of him into my lineups because of nights like last night. However, nothing has changed for Reid over the last two weeks, and I have no reason to play 30% Naz Reid when I played him in a faster matchup at 2% last night.

I will still play Reid a little for the upside, but he is not someone who should be 30% on a slate like this.

I currently expect Danilo Gallinari to be the 6th highest owned player on the slate on DraftKings, and that is simply too high for his upside. The Thunder have limited Gallinari all season, and he rarely hits an upside that hurts those who faded him in GPPs.

Detroit’s backcourt is decimated, and this will eventually open up some sort of value as the day goes on. The Pistons have no real reason to want to win games, but they also have no reason to preserve players. If Brandon Knight is ruled in and starting, I love Knight as he can produce in multiple ways.

If Knight is ruled out, it will likely be Jordan Bone starting at point guard, and I would become a big fan of his too for value. I will almost definitely be playing a good amount of the Pistons starting point guard in GPPs tonight.

If you are playing in GPPs, I think that the Pelicans’ play style is just bound to produce GPP winning upside out of one or more guys every single night. While all seem appropriately priced for their projections, this team is predicated on ball movement and finding the open scorer more than it is around one guy.

This opens up assist and scoring upside for each player because they are not designing ‘X’ amount of plays for different players.

Just last night, the Pelicans had three players over 49 fantasy points. In their last five games, the best Pelican has scored at least 49 fantasy points, which would be good enough to be in the GPP winning lineup every single night at their price.

Even if you get the 2nd or 3rd best producer, those players have done enough for you to be happy with their performance during blowouts.