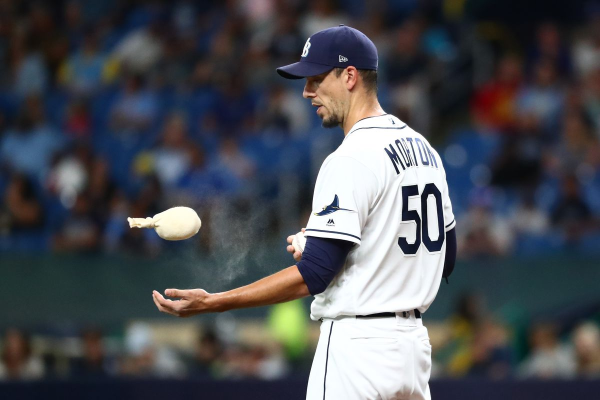 Another 15-game slate is on tap for Tuesday night and I expect to see a lot of interesting ownership all over the board tonight. There are some clear chalk options, but as in any 15-game slate, you can always find ways to be different without making bad decisions.

The highest priced pitcher that I want to play tonight is CharlieMorton. The guys above and around Morton are not in the same spot as him and that is what takes the cake tonight.

Morton faces a powerless Orioles lineup in Tropicana Field, one of the best pitchers parks in baseball. Morton has elite stuff and should have no trouble getting out these Orioles bats early and often.

My favorite pitcher on the slate tonight is JamesPaxton at a reduced price. On these huge slates, you NEED some sort of upside. That doesn’t mean that you need to have the highest scoring pitcher on the slate, it just means that you want a pitcher that can really outperform his projection and the pitchers around him in price.

Paxton has struggled with walks and command recently, but I don’t think there is anything else going on to warrant major red flags. Paxton does have downside tonight, but the upside at such a cheap price for his talent is undeniable.

Jack Flaherty is another pitcher that is too cheap for the overall talent level. These kind of plays are risky because of the blow up potential, but Flaherty has elite pitcher potential and I will take that talent for a major discount in a ballpark upgrade any day of the week.

I have no interest in GermanMarquez on DraftKings, but he is WAY too cheap for his talent level tonight. The matchup in Coors is terrifying, but I do think there are paths to upside if he pitches his best game.

MattStrahm started off the season fantastically, but then hit a rough patch that has decreased his appeal. With that rough patch came a drop in price and he has another cupcake matchup on tap tonight.

I loved Strahm last outing vs. the Orioles just because of the talent and matchup combination. I think that Strahm’s last outing can be a launching pad for the rest of his season and this matchup will only help continue the rebound.

Everyday on two pitcher sites, I fall in love with bats that force me to use someone from the basement. Tonight that pitcher will be ReynaldoLopez.

Lopez is a very boom or bust pitcher, but that is what you want in a punt pitcher. Lopez can throw up a legitimately good outing at any point and that is very valuable on big slates. The Tigers offense is not the kind of lineup that really worries me with Lopez, which is shown by his 6 innings, 14 strikeout game vs. them at home earlier this year.

The Rockies are in an interesting spot with a 6.9 run total in Coors tonight. They face Jose Urqudiy, an Astros prospect making his major league debut.

Urquidy is a very strange prospect to me. He has really poor grades as a prospect and didn’t develop that well, but he has been really impressive this year in AA and AAA ball.

At the end of the day, how am I supposed to get past a team with a run total near 7 vs. a nobody prospect even if he does have good results this year? I will be heavily exposed to Rockies tonight.

The Angels have a 4.9 run total tonight against a solid pitcher in Mike Minor. Minor’s recent results have bumped most Angels’ prices down, which is what I am looking to attack here. The Angels may come out and play inspired baseball tonight after the recent tragedy and it will be a game that I want to watch.

The most interesting spot of the night is the Rays facing one of the worst pitchers in baseball, we’ll call him Asher. Asher projects for a 6 ERA in baseball this season and even in the Trop, the Rays are projected to score 5.8 runs tonight. Sign me up.