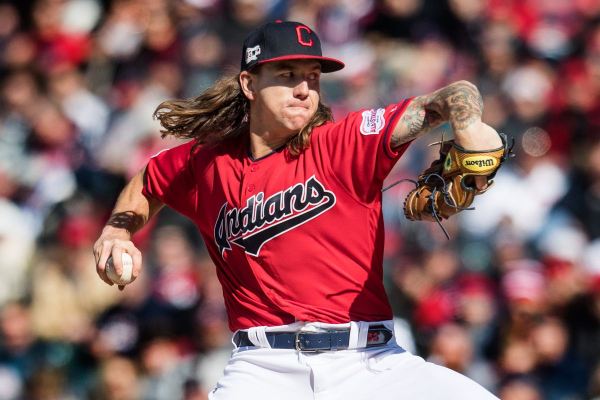 Another Friday night in MLBDFS mean another massive slate with a lot of angles to attack. The ballparks across the country are really heating up and that is usually going to increase overall runs scored. Keep this in mind when using elite pitchers today and moving forward.

Last night, we had a small 4 game slate where even the best pitchers on the slate all really struggled to get anything going and I think that could even be the case tonight on a 14-game slate

At the top end of pitching, my favorite arm is MikeClevinger facing off against the Baltimore Orioles. Clevinger has been hurt twice and returns from a sprained ankle tonight, but he has elite strikeout stuff. The Orioles don’t have horrible K numbers vs. right-handed pitchers, but their lack of pop and ability to strike out at an average clip line up for Clevinger to be my most owned top end pitcher.

I have almost 0 interest in the top end arms besides Clevinger because of the situations they are in. Jacob DeGrom is a fantastic pitcher, but I would rather spend on bats than take him against a really tough Atlanta Braves lineup.

Hyun-Jin Ryu is more talented than his price tag, but so was Walker Buehler last night. I won’t hate on anyone for taking the risk but I just don’t see the need tonight. Coors makes hitters better due to the elevation and spacious outfield, but it also makes pitchers worse due to the decrease movement on pitches at elevation.

Jose Berrios has a great strikeout matchup, but he has really struggled MUCH more on the road throughout his career, so much so that it really doesn’t seem like a fluke at this point. Berrios has the upside to pay off his price, but the White Sox lineup as enough pop to scare me off.

I have absolutely no interest in Cole Hamels and LanceLynn. Both lack the elite upside on a semi-consistent basis and I would just rather take Clevinger or the bats in elite spots.

Venturing down the board a bit, Sonny Gray really catches my due to his elite strikeout stuff. Gray has been MUCH better than people think this season, especially when it comes to his strikeouts. Gray has the 7th highest K/9 on the slate and he is 4th in xFIP behind Clevinger, Ryu, and DeGrom.

By salary, Gray is the 13th highest priced pitcher on DK and 14th on FD. The matchup with the Cubs is a scary one, but I think Gray’s price on most sites should be 15-10% higher than it is right now.

If you want a safe mid-tier option, look no further than Anibal Sanchez. Sanchez hasn’t had a truly bad outing for his price in his last 5 starts. The Tigers lack elite power, which is what usually scares me off of Sanchez.

My favorite two SP2’s on two-pitcher sites are from the Phillies and Marlins game. Both Hernandez and Velasquez are cheap enough to get in good batters and have real upside.

Velasquez was being used out of the bullpen, but threw 57 pitches against the Marlins 6 days ago. I assume that Velasquez could be allowed to go about 80 pitches. This is risky, but Velasquez was able to get through 5 and post 18 fantasy points in just 57 pitches in their last matchup.

Hernandez has begun to flash legit K stuff that he did not show on his first trip to the majors last year. My biggest concern with Hernandez is that the Phillies did touch him up a decent bit and they will now see him again just a week later, which is almost always worse for the pitcher. That being said, Heranadez’s upside and price is undeniable on this slate.

Offense on today’s slate is going to be very different than most days. I want close to 100% Dodgers stacks in Coors vs. Antonio Senzatela. The Dodgers were great in Coors last night, which is normally the worst offensive night of the series against a very similar pitcher.i expect the Dodgers to absolutely go off tonight as the chalk stack.

For me, I see a lot of ways the expensive pitching can bust, which makes it easy to go to cheap pitching to load up on Dodgers bats. I want the lefties the most, but anyone in this lineup has incredible upside tonight.

To fill in the rest of my lineups, I may mini-stack pretty cheap Cardinals righties against Eric Lauer, Nationals against Daniel Norris, and Astros against Tommy Milone.

For lower-owned, one off home run bats. I will look toward Twins, Mariners, Rangers, Angels and teams that I have already mentioned.

Tonight, the most pivotal game of the 2022 NBA Eastern Conference finals takes place in Boston, with the Miami Heat taking a 2-1 series lead into their matchup with the Celtics. In Game 3 on Saturday, the Heat took control early, outscoring the Celtics 39-18 in the first quarter and leading by as many as END_OF_DOCUMENT_TOKEN_TO_BE_REPLACED