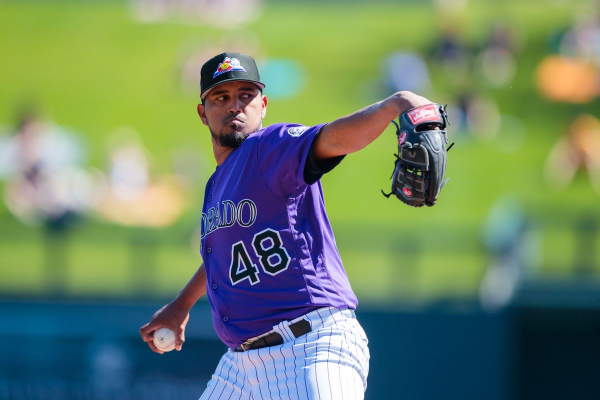 On the top end, my highest projected pitcher is pretty easily Justin Verlander; however, I think I prefer attacking German Marquez at a cheaper price in a scarier spot. Verlander is the safest play on the slate BY FAR, but hey, I want to attack upside here, and I think that attacking some other players is the way to go tonight.

Patrick Corbin is really talented, and my ownership on him will depend on the field. If Corbin is being forgotten, I will use Corbin, but I assume I will just have a bit like I assume the field will.

Of the other guys in the range, I would rank them Soroka, Maeda, Minor, and Strahm. I don’t really want to play any of these guys because they are just too expensive or in bad spots. I have been a huge fan of Soroka, but the matchup is not good at all for him in a hitters park.

Eduardo Rodriguez is in a really good matchup if we can ignore Trevor Story and Nolan Arenado. Too bad we can’t, but I will still take a shot here in tournaments because we all saw how many Ks the Rockies can provide against lefties last night.

Of the bottom tier, I think that Jalen Beeks is capable of having a good start against a bad Miami offense, but I will not really go there too much tonight. If Beeks fits in the last slot, I will take him instead of rebuilding the lineup.

Homer Bailey is my favorite cheap pitcher, and I have been on the Homer Bailey train all season long. Bailey just isn’t that bad, and he is treated like he got his nickname from giving up homers. Bailey is a former top prospect that has the talent to succeed. Now, Bailey is way far off of that top prospect notion at age 33, but he has been much improved this year in terms of his slider and fastball. Bailey still throws pretty hard, and his slider has improved significantly. I will have a lot of Bailey tonight, A LOT.

If you have to play someone else down here, it’s Jose Urena. Urena isn’t horrible, and he is in a good park. I doubt I will have any, but I won’t yell at you if you do.

Last night I played 100% Houston Astros stacks, and I’m not going to lie, their performance didn’t do anything to persuade me from doing it again tonight. Now, the Pirates pulling Joe Musgrove with a one-hitter in the 7th inning with 75 pitches to pinch hit up 6-0 did persuade me to continually trash the Pirates until future notice, but I digress.

I played pretty close to 100% Caleb Smith and Musgrove last night because they were upside pitchers that fit with the Astros and allowed me to get decent bats next to them. As you can now figure out, I will likely be doing similar things with Marquez and Bailey tonight. Give me all of the Astros.

Texas is in a great spot vs. Jorge Lopez, and I think that they are the clear #2 option on this slate with their power upside.

I do not mind attacking three veterans in Michael Wacha, Gio Gonzalez, and Jake Arietta. None of these guys are as good as they once were, and I expect one or more of them to struggle vs. good lineups. I will be really happy to attack the lowest owned of these stacks in GPPs, but I will definitely have a bit of all three.