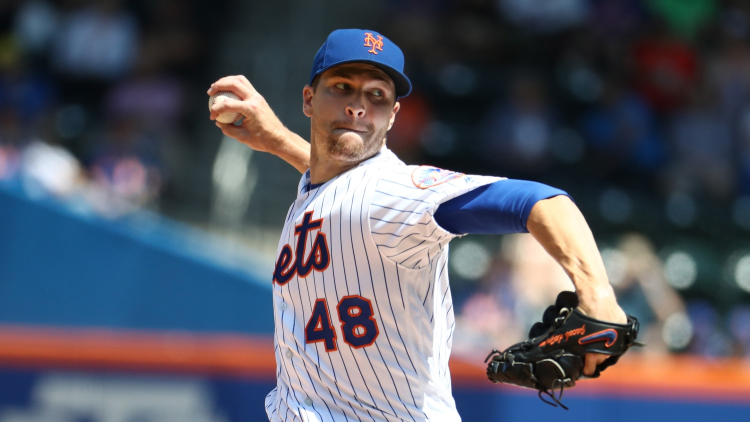 We have a huge 15-game slate on the board today in MLB DFS and that means there are a lot of opportunities to make great and horrible decisions. My best suggestion on slates like this is try to find your favorite few spots and really attack them. Especially with how this particular slate sets up, I would be surprised if we see a lot of ownership on anyone besides a few stud pitchers, due to the many options at all levels of both hitting and pitching. On days like this, there will be really big run totals, so I do prefer stacking on such large slates and hoping you can nail the top team on the board.

At the top of the board, we have 3 of the best 7 or 8 pitchers in baseball and that might be underselling it. They are all reasonably priced for their talent level, but I will just be siding with matchups in this spot. I would rank them DeGrom, Scherzer, and Cole, but I would also expect ownership to turn out the same way. I would rather go to DeGrom if I am spending up so much because I think his slate-breaking upside is much more viable here than the other two in more difficult spots. The only nice thing is that you will get them lower-owned and these guys can clearly completely neutralize a matchup on any given day.

The next tier at pitching is what I would call the “overpriced tier”. PASS. These guys aren’t my cup of tea on massive slates. I want lots of upside or lot of salary savings and guys like Hamels, Hill, Montas, and Perez don’t do it for me.

If I wanted to fade the top end, I would likely start looking to pivot to Jon Gray or Max Fried in the upper mid-tier. Gray and Fried are very talented and could very easily match a couple of the top guys if they are on today. Neither has a great matchup, but I would prefer Gray in Philly over Fried in Atlanta by a very small amount.

My three favorite pitchers on the bottom end are TrevorRichards, Aaron Sanchez, and Jefry Rodriguez and I think there is a pretty rough drop off after that if you want any kind of upside. I think that Trevor Richards has really good stuff for someone with his numbers on the season. He has really struggled in the walk category this season, which really shouldn’t be an issue for him, as it isn’t really in his past. Other than that, his zone contact rate has decreased while his swinging strike rate his ticked up significantly. I’ll take the upside with Richards in this range.

Both Rodriguez and Sanchez are pitchers that have paths to “upside.” When I say upside I mean 7 scoreless and maybe a K per inning. These are not fantastic pitchers, but both are kind of plodders. Guys that you wouldn’t normally take in DFS really, however, their matchup and the slate allow me to get on board. The bottom end of this pitching slate is trash and I think these are two of the better raw pitchers of the bunch. The matchups with Baltimore and the White Sox allows me to buy into them tonight.

As I have mentioned, a lot of the pitchers on this slate stink and I would be fine with attacking a lot of spots. Here are my favorite five stacks for raw points tonight

I will be significantly overweight on the top 2 teams on this list because the people they are facing shouldn’t be in the major leagues. AdrianSampson is #bad and I want to attack him every time out. The top of the Cardinals lineup should get Jose Leclerc, who is talented, but has a 1.8 WHIP this year to start, which does add a bit of appeal for maybe the bottom half stack who should see Sampson more.

Cole Irvin is not good and he should be in double A. Yes, Double A. Not only back to triple A where he came from. Irvin has average command, zero above average pitches, and a future value of 40. That’s not good. Irvin’s ERA in AAA is 2.25 this season. Great, huh? His xFIP is 5.5. Irvin is probably one of the luckier pitchers in professional baseball so far this season and I will be willing to attack him until this luck runs out.