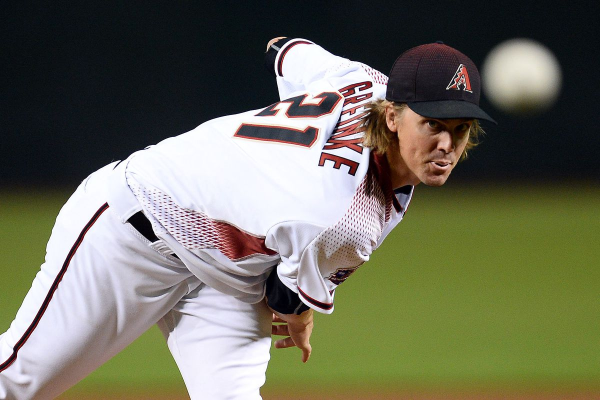 We have a huge 14-game slate on the docket today with a lot of pitching at the top end and a lot of gas cans at the bottom. This slate will likely come down to finding the cheap stack or the cheappitcher that can help you fit the best plays on the slate, so I will try to focus in on that throughout.

The top tier of pitching is loaded with talent and we are starting to see some DraftKings prices come up a little bit at the top end, which changes the way you should play. Early in the year, we have not seen a lot of $11,000 pitchers, but we do have one today in Justin Verlander. This is a fine spot for Verlander vs. a solid K matchup, but I will likely risk it with guys cheaper in price.

The same goes for Luis Castillo. Castillo has been great this season and seems to be the guys I thought he could be 3 years ago. Castillo has always had great stuff and that is showing up every start now. He struggled a bit vs. San Fran in his last start, but that was in Cincy, a completely different place than Oracle Park. I like Castillo as a pivot to Verlander because he got 9 K’s in 7 innings on just 92 pitches last start against the same team, but I don’t think I will have a ton here.

Glasnow is another tournament pitcher, but I prefer Castillo at a similar price on most sites. I think the Glasnow matchup puts him below Castillo.

Greinke is a solid option, but he’s just not a guy that I want to pay this much for on a slate with this much upside.

Wheeler and German are similar pitchers in a lot of regards, as they both have great stuff when they are on, but I prefer German here because I think that he is the more talent pitcher at the end of the day. German has ELITE stuff and I think he will be overlooked tonight with so many options.

I won’t talk anyone off of German Marquez. Marquez is another ultra-talented guy, but he is in Coors Field tonight against the Padres. I think that German’s raw talent and proven ability to still pitch well in Coors makes him a viable tournament play, but I wouldn’t touch him in cash.

Jake Odorizzi is an interesting ownership case because he is a veteran pitcher that has always been “fine.” Odorizzi is a guy you felt comfortable playing for 7.3K on a bad slate and hoping he has a good night. Now, Odorizzi has had 2 straight great games and find himself at a much higher price tag than we are used to. I love the matchup with Detroit, but he can’t be a core play at the price on most sites.

There are two guys at the bottom end of the pricing that I will suggest plugging your nose on and jumping in if you can handle it. These two pitchers are Lance Lynn and Homer Bailey. Yes, yes, yes, I know. These guys suck, right? Maybe, but they are both in interesting spots. Homer Bailey’s spot isn’t fantastic, as I think the Phillies lineup is pretty scary for opposing pitchers as they provide power, speed, and patience, but Bailey is CHEAP. Bailey’s slider this season has been a legitimately good pitch and I think he COULD go out there and get 18 DK points and give you a shot to win GPPs. Is it the most likely outcome?

Nope, but I think its worth the risk. Lynn is a matchup play against the Astros. The Astros are a great offense, but they aren’t a great lineup to hit Lance. Quick name the Astros four best hitters. “Uh, Altuve, Bregman, Correa and Springer?” Okay maybe some people think about Brantley, although I think he would get overlooked in that exercise more than he should. The one thing is that they are all right handed. Lynn is a bad pitcher vs. left-handed hitters and he is a good pitcher vs. right-handed hitters. I think Lynn can try to neutralize the best bats in the lineup and have a decent performance.

Yes, the Dodgers, Twins, Red Sox, and Rockies are all in great spots, but those lineups will cost a lot. I expect them to all garner a lot of ownership and I am fine with all of them. My favorite stack on the board for the price is the Blue Jays, who face DylanCovey. He is horrible and the top of the Blue Jays lineup is not. I will probably start stacks with Sogard and end them with Vladdy with 1 or 2 more guys in between them.

The Angels have an incredibly high run total and they have a few expensive bats along with some cheap guys to supplement as well.

If you are looking to get off of the chalk and really be crazy, how about the Yankees, Giants, Marlins, and Orioles. I really don’t want to play the Giants and the Marlins, but they fit this list. Castillo, Glasnow, Wheeler, and Cahill all have had very significant walk problems throughout their career. The first three seem to have gotten over this early on this season, but if they come back, these guys were all known to have massive blow-up performances when it got bad and NO ONE is going to play those first three teams. Obviously the Yankees offensive talent is more enticing to actually strike an upside than the Giants and Marlins, but they all fit this mold tonight for a flier.