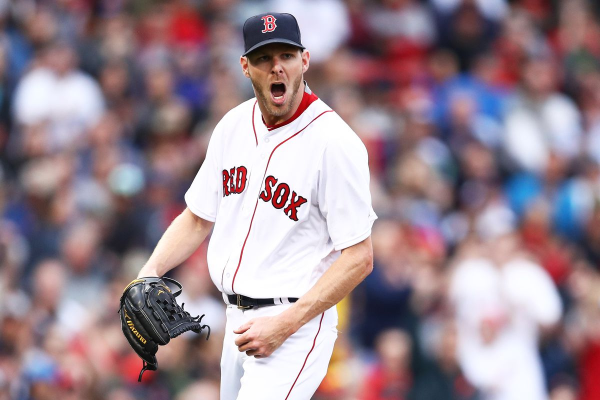 Another day, another stud pitcher that I just can’t convince myself to roster. Chris Sale is elite and should be on every cash game roster, but I can’t roster him at the price in tournaments. I need high powered offenses in my tournament lineups and I don’t think I can fit them while also using Chris Sale. The matchup with Detroit is just fine for Sale, who isn’t really going to see a “bad” spot all year. Chris Sale can absolutely crush tomorrow but I won’t play much simply for lineup construction purposes.

Mike Clevinger is a pitcher that really interests me in GPP’s. Clevinger has elite stuff that can make any hitter look foolish at the plate. I don’t know if you watch the Rangers often, but they have a lot of guys that are more than willing to swing out of their shoes. The scorching weather in Texas isn’t great for Clevinger, but there’s a chance that the Rangers just struggle to make contact. I will have more Clevinger than the field in tournaments.

Am I dying to roster J.A. Happ? Nope. Will I roster him? Maybe. The Orioles have been bad all year and now that they have lost one of the best hitters in the league, they should be one of the worst in baseball. Happ has done well against Baltimore this season and I think that will continue against a swing-and-miss happy team. Happ has GPP upside and a decent floor in cash in this spot.

Chris Archer is better than his price on every site. I don’t like picking on the Marlins with elite pitching because they seem to do about the same against all types of pitchers. They are pesky but they are not good. They’ll do everything to just limit the massive upside game that you would think you see against a team this bad. Archer is at a discount for his talent level and I like him a lot for GPP’s.

Jake Odorizzi is my favorite cheap pitcher on the slate and it’s not that close. Odorizzi is a solid pitcher facing a mediocre Royals offense in a ballpark upgrade. Odorizzi is head and shoulders more talented than most guys in his tier and I can’t pass him up here in any format. I will be overweight to Odorizzi in GPP’s and he would be in every cash team I make.

I don’t mind punting with Ivan Nova, Brent Suter, or Brad Keller. All three are not in the best spots, but they all are talented enough to outpitch their salary. Nova and Suter are typically cash pitcher in good spots where they can limit damage and grind through a decent start. Both get bad ballparks and pretty good offenses to deal with, which is why they are not core plays for me, but they can still do what they do in a tough matchup. Keller isn’t a great pitcher, but he has flashed upside this year and at this price tag, especially, rostering someone with a 5% chance of scoring 25 DK points is probably worth a flier on a couple of lineups.

Cleveland is the best stack on the slate for the third slate day in my opinion. The Rangers pitching staff is dreadful and their bullpen isn’t good either. They have been worked a good amount in the last 2 days as well. The Indians will likely be seeing repeat bullpen arms, which should only provide even better at-bats. Stacking Cleveland is a strange task because of their platoon players. BrandonGuyer will pop up batting 5th at a very cheap price tag, but get pinch hit for in the 4th inning and kill your stacks if he doesn’t produce in his 2 at-bats. I try to avoid these plays when stacking the Indians to differentiate myself a bit. A lot of players playing the Indians need the salary savings because of the prices of Ramirez, Lindor, and others, and what better way to save salary than a cheap bat or two from the same team as the studs?

The Red Sox are in a great spot against Blaine Hardy in Detroit. Hardy has been sub-par this year and this is not the spot for regression to what I expect to be a slightly better pitcher than his numbers suggest. Hardy allowed 8 hits and 5 runs against the Red Sox earlier this year and I expect more of the same in this matchup. The likely suspects are my favorite plays from the Red Sox including Betts, Martinez, and Pearce.

The Cardinals have been streaky at times this year and I think they are putting together solid at-bats post-break. Jose Quintana (and the whole Cubs staff) have really struggled this year, which likes me like the Cardinals tomorrow if we get a decent lineup after the doubleheader on Saturday. Quintana’s name brand should steer people clear of the Cardinals for the most part on a pretty big slate. Also, go look at MattCarpenter’s game logs and tell me what I’m supposed to do tomorrow. I have been riding Carpenter for the last 2 months and I don’t plan to stop now, but how much longer can he keep this up?