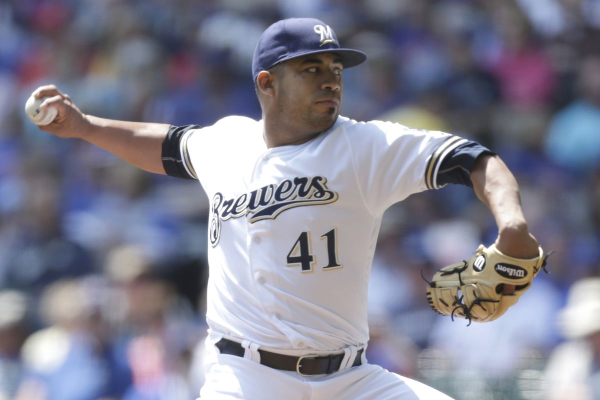 Junior Guerra isn’t a sexy play, but he does seem pretty safe with his elite consistency this year and a big ballpark to work with. The Pirates aren’t the ideal matchup for upside, but Guerra doesn’t reach his upside very often anyways. I don’t love Guerra here, but he is definitely a cash game option if you don’t trust anyone else on the slate.

Nathan Eovaldi has been really impressive this year since returning from Tommy John surgery. Eovaldi has increased his fastball movement, which has allowed him to get more whiffs than in years past. He has always had the velocity, but the pitch was so straight that it didn’t give many hitters much trouble. The Twins offense does have some threatening bats in their lineup but has overall been a disappointment this year. I don’t LOVE the matchup, but I don’t love much today and Eovaldi has shown a pretty significant upside at a cheaper price than the guys up top.

I think Carlos Martinez SHOULD be the highest owned pitcher on DraftKings today and he WILL be mine. Car-Mart had struggled with walks coming back from the DL, but he has recently seemed to figure out his issues in that regard. He has only walked 5 guys in his last 4 starts and looks like the Martinez that people paid $11,000 for earlier in the year. He faces a Cincinnati offense that has been rather impressive this year. They do see a pretty big park hit going from Great American to Busch Stadium and Martinez is just too cheap for the talent.

Jake Odorizzi is clearly trying to become a better pitcher. He has taken the offseason and dedicated it to attacking his weaknesses and I think it is working. Odorizzi’s pitch mix needed to be altered and he has made strides in that aspect. I really like Odorizzi here against a pretty weak Rays lineup. Odorizzi has the stuff to grind out a decent performance for a cheaper price, but he also has the ability to show some upside at a very reasonable price. He will be one of my higher owned guys tonight.

Domingo German is really talented. He faced these Indians in his first big league start and threw 6 scoreless innings with 9K’s and only 2 hits, while on a pretty low pitch limit. German SHOULDN’T completely repeat this performance, especially at Progressive Field, but he COULD. At such a cheap price tag for one of the highest swinging strike %’s in baseball, I think you have to take the risk in tournaments.

Brad Keller has been solid in two of his last 3 starts and isn’t a BAD pitcher. He struggled mightily against the Red Sox and the Astros while dominating the Mariners and the Angels. The White Sox are clearly worse offensively than all of these teams. I think Keller is a nice savings option that has shown a clear upside and gets his best matchup yet.

Both Alex Cobb and Wei-Yin Chen are “in play.” Yes, that’s about all I want to call them. Cobb and Chen have good K-matchups and are really cheap. Will they get destroyed? Definitely possible. Could they give you 6 innings, 6 K’s and 3 earned? Yes, and I think the price makes that stat-line very doable.

Coors has two rather unproven pitchers in a matchup of two powerful offenses. Seattle is a good offense that has power throughout the lineup and Safeco to Coors is one of the biggest park upgrades in baseball. Guys like Kyle Seager, Nelson Cruz, and Mitch Haniger are big bats that normally play in a horrible park. I like the Mariners a lot today. The same can be said for the Rockies. The Rockies have been crushing in Coors recently and there is nothing to say that should stop today. Hopefully, Christian Bergman’s FPPG stops some people from stacking the Rockies, but I doubt it’ll keep the ownership down. I really like a full game stack with 2 high-upside, cheap arms in tournaments.

Clayton Richard started off the season strong but has been poor in his last 3 starts and the Cubs won’t make it much easier. I really like Cubs righties and Cubs one-offs in tournaments. Richard is a ground-ball pitcher, so I prefer to attack him with flyball hitters to counteract his best ability.

Zack Godley is talented, but he has shown the ability to really get hit around (by bad teams too). The Braves are one of the better offenses in baseball and they should be low owned against a pitcher a lot of the community respects. This park is great for offense and Atlanta has used it to its advantage all year. I love the full Braves stack in tournaments for leverage.

The Yankees face Shane Bieber, who has been great in most starts since coming up. The issue with Bieber is that he isn’t a super high strikeout guys. If you aren’t striking out the Yankees, odds are you are getting hit hard. Also, Bieber has struggled in his last 2 starts giving up 17 hits combined. We see this a lot with young pitchers that come out of the minors. They dominate and slowly come back to earth once teams see more and more of his tendencies. The Yankees may be the first team to fully erupt on Bieber and I doubt they will be highly owned. People will be scared off because of the talent, but hey, Kluber had 6 earned runs against the Yankees yesterday.

Be DIFFERENT. I don’t know if there is a bad stack on this slate and some of the expensive ones against respected pitching should go unowned. I mentioned my 2 favorite stacks against quality pitching, but here are some more that I may barely dabble with, but do very much see the upside in going to.