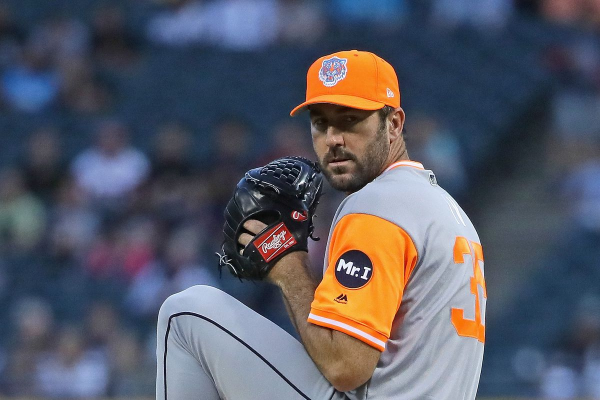 Justin Verlander has been on a tear and now gets a matchup vs. the Rangers. Verlander has 23 K’s in 20 innings while only allowing 2 runs. He has one of the highest ceiling/floor combos on the slate and is probably underpriced for his matchup. He is my favorite option on the slate in all formats in terms of raw points, but my ownership will probably depend on the field. This slate has a lot of pitchers with really high upside and nailing the pitching combination that scores 60+ will probably be a big part of taking down GPP’s. If Verlander is the most popular, I may pivot to other high upside options.

Chris Sale is an interesting option. He IS underpriced for the talent, but he hasn’t quite been the same this year. Sale is coming off of 2 of his worst starts of the season, but they come against two of the worst matchups in baseball. I am willing to dismiss these poor starts if the ownership is down because of it, but if he is the high owned play that he should be, I may stay away and go to all of the good options around him. The White Sox (REVENGE) are not an imposing matchup and they will K a lot vs. an elite pitcher, so Sale has just as much upside as anyone on the slate.

Stephen Strasburg iSs another elite pitcher in a pretty good matchup. I think the industry doesn’t respect Strasburg as much as they do guys like Sale and Verlander. Strasburg may be the low-owned top-tier option with clear upside vs. a Giants team that has struggled to make contact all year long. I do not project Strasburg to be the highest scoring pitcher on the slate, but no one else will either. Strasburg has 40 DK points in him and if a few other guys bust, you will be way ahead of the field.

Jacob DeGrom has been elite this year and has shown that he can be as dominant as anyone. Now, he faces a really scary Yankee team that will strikeout vs. elite pitching. DeGrom is a great GPP play if he is low-owned. I think the industry has picked out the Yankees to be a “sneaky” target to get K upside from pitchers, so I doubt the ownership will be low enough for me to do it, but I can’t tell you not to play him.

Masahiro Tanaka is another Yankee anomaly that seems to be pitching under his peripherals. Tanaka has great stuff but seems to struggle to get people to chase pitches in some games. In other games, Tanaka looks virtually unhittable and has just as much upside as everyone on the slate. He hasn’t shown it this year, so we are getting a slight discount and I believe Tanaka will be underowned because he is in between price tiers. I think we see good Tanaka vs. the struggling Mets and if we do, he can match any of the guys above him. Tanaka’s floor is sketchy against anyone, so I would avoid in cash.

Vince Velasquez is very talented. He gets a good K matchup vs. the Brewers and has shown rather surprising consistency this year. Velasquez seems to have turned the corner and we may see his price just continue to rise. I don’t mind taking the discount on Velasquez if you want to stack some bats in good spots. The Brewers offense can also be pesky if Velasquez doesn’t have his best stuff and I don’t feel safe enough for cash even with his consistent outing recently.

Garrett Richards is too cheap! I’ve said it basically every start this year. All of these other Angels pitchers are not as good as Richards and they are always more expensive than him. I will continue to play Richards to price enforce, but this isn’t the best matchup. The Twins have been hitting better of late and they aren’t full of strikeouts, but Richards can dominate any matchup if his stuff is on. Richards has control problems, which is generally the reason for his bad starts. I like Richards more on slates without much pitching where I can play him without worrying as much about the downside, but I will still have my fair share of Richards tonight.

I NEEEEED to save money and none of these guys are very good. ZachGreinke? Listen, he’s in Coors, I know, but he is way more talented than the guys at his price range. Coors games have blow-up potential every day, but pitchers do throw gems there when they are on. This is the first game in Coors, which is generally the lowest scoring game in a Coors series and the Rockies are traveling back from a day game in Cincinnati. These are about the best conditions you can ask for in Coors, but its still not great. I’ll play Greinke where I want expensive stacks in GPPs.

The Red Sox face Dylan Covey in Fenway. Covey has been fine this year in very limited innings, but last year, he was terrible. My ownership on the Red Sox depends almost completely on the field. If the field is confident that Covey is still terrible, I think that fading the Red Sox can work with Covey showing improvement this year. If I hear people being scared of Covey’s recent performances, I can hop on the Red Sox stack.

The Astros face DougFister, who has been a competent pitcher over the last few years but has really struggled this year. Fister has been hit by righties harder than any other time in his career and the Astros are FULL of talented righties. The Rangers’ bullpen is one of the best in the league, but if this game goes as planned, the good Rangers bullpen should be avoided. I think the Astros are my favorite stack on the slate relative to what I think their ownership will be, especially when there are so many good pitchers to pay up for.

This is going to be short and sweet. The Mariners face Wimer Font and the Rays bullpen. Wilmer Font has been released twice THIS SEASON. He is #NotGood. The Mariners are good plays in all formats.

MattHarvey has been really bad. Now, he goes from Citi Field to Great American. It should only get worse. The Cardinals have struggled recently, but Harvey can single-handedly heat a team up. Harvey has shown me nothing to believe he has gotten any better and the Cardinals may be low owned on such a big slate.

Coors Field stacks are always in play. I significantly prefer the D-Backs coming off of a day of rest against a significantly worse pitcher. I assume the field will agree with me, so getting ownership to both sides of this game is viable if you are multi-entering on this slate.