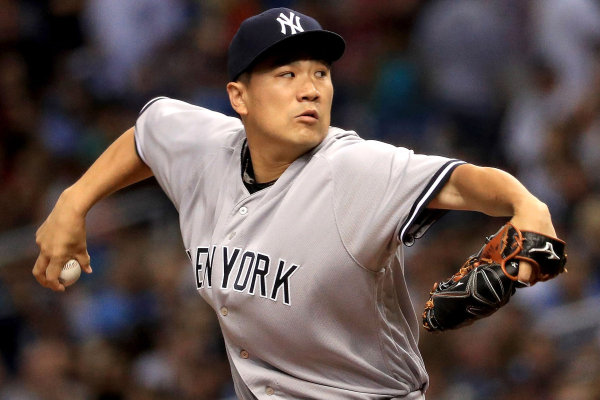 Here is a look at our Daily Fantasy Sports Lineup tips for Major League Baseball:

Masahiro Tanaka is my favorite top pitching option on the slate today. Tanaka has had his fair share of home run problems throughout his career, but that shouldn’t be a big issue in Miami vs. this team. Tanaka has some of the best stuff in baseball and can generate swings and misses from even elite contact bats. I think the floor with Tanaka in this spot is about as high as it could be for him and he can always generate upside with his ability to generate K’s. I like Tanaka in all formats.

Tanner Roark has been all over the place this season but has recently increased his production. This matchup vs. the Phillies is one of the more boom or bust options a pitcher of Roark’s ability could have. The Phillies can hit the ball hard all over the lineup, but they also K a lot vs. right-handed pitchers. As mentioned before, Roark has been all over the place, so he has the ability to take advantage of the high-K matchup. He also has the ability to blow up against a rather powerful team. Roark is a GPP option that I assume won’t be too highly owned.

Michael Kopech is one of the best prospects in baseball and he debuts tonight vs Minnesota. Kopech has stuff that could instantly translate to a top-tier strikeout pitcher. I don’t think Kopech will be completely dominant for the rest of the season, but his K-upside is elite at this price. You don’t need Kopech to throw a complete gem to be effective here, but I expect him to rack up at least a K per inning here and limit the damage. Kopech has walk problems, which is why I don’t think he will instantly dominate consistently, but when he is on and the walks are down, he has elite upside.

Kevin Gausman is a supremely talented pitcher with the ability to generate a lot of K’s at a low price tag today. Gausman has had a shaky start with the Braves, but this is a spot where I really like him. The Pirates are a decent offense, but they are clearly built to be better vs. left-handed pitching. Gausman has standard splits and should be able to neutralize a lot of these right-handed bats in this massive park. Gausman has also pitched the vast majority of his career in small parks, so this is one of the biggest park upgrades he has ever received.

The lower tier of pitching is terrible today. I looked into every option and found 3 that you could maybe play. I am not suggesting any of these guys and I think that my core will not consist of any of these pitchers but here they are, with a little detail.

Glenn Sparkman is NOT GOOD. He’s honestly pretty bad. He can’t get K’s. He is not a prospect. He doesn’t get a lot of ground balls or do anything else particularly well. Here’s the pitch… He’s dirt cheap against an “eh” offense in a great pitchers’ park. That’s the only pitch, but it’s better than some of the other guys down here.

Brett Anderson isn’t a complete gas can. He gets a Rangers team getting a park downgrade. He is left-handed, which should neutralize most of the power in this lineup. He’s been decent recently, although he has been lucky. He’s not a good option, but he’s not one of the worst down here.

Ariel Jurado is a mystery to me, but I am going to rely on the scouts here. Supposedly, he’s going to be good. He is a top Rangers’ prospect, but I just don’t see it in the stats. He can’t strikeout ANYONE. Maybe, he can settle into a much better park than he has seen in his first five starts and have a good performance. Like I said, this is hoping to see the long-term talent, that I truly don’t see yet, flash for one game.

The Rockies are going to be the chalk against Robbie Erlin and the Padres bullpen and why wouldn’t they be? Erlin can’t generate swings and misses and now he goes into Coors with a subpar repertoire. Erlin can only survive with a lot of BABIP luck here and I will gladly lose making the right plays and getting hurt by the variance of baseball. Simply put, play all of the Rockies tonight and differentiate somewhere else.

The Brewers are one of the best lineups in baseball with their new additions. They have a lot of potent bats from top to bottom and I think this is a really bad spot for Sal Romano. Romano has flashed upside in spots, but it seems to be against more top-heavy teams. Romano has decent raw stuff and has the ability to get out quality hitters at times, but when he faces a top-tier offense, one of the bats will get to him. Things then tend to tumble out of control, creating a great stack opportunity. The Reds bullpen is really strong in the back end, but the front end isn’t too intimidating and if all goes well, that should be who these Brewers’ bats are facing.

The Giants are a team I NEVER play. I mean NEVER. I think they’re horrible. I just don’t even look at them. They almost never have good fantasy days, but the spot is just an upside spot. Steven Matz has 2 problems. He can have blow-up problems due to lack of command and control. This makes him a great opponent to stack against in hopes of a terrible outing. He also can’t hold on runners at all. Anyone with speed, which is asking a lot from this ancient Giants team, will steal whenever they get on base. This also allows for a great stack opportunity.

The Blue Jays face off against DylanBundy who has struggled as of late. Bundy has seen an increase in his walk rate, which is one of the main causes of concern. I think Bundy is probably pitching better than his stats suggest, but that doesn’t mean he is pitching well. I like chasing home runs here from guys like Smoak, Morales, and Grichuk while getting in nice value plays like Travis and Jansen to round out the stack.