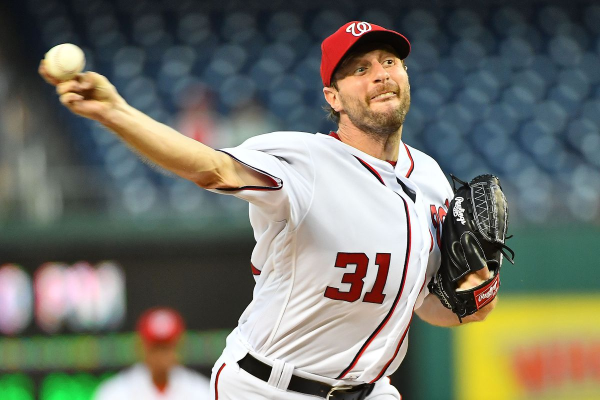 Here is a look at our favorite lineup plays for Friday:

Max Scherzer is one of the best pitchers in baseball and this is a great spot for him. Scherzer gets a Miami lineup that is adding kids to it seemingly every single day. Miami has been pesky this season, but now the lineup is becoming worse and Scherzer can dominate anyone anyways. Scherzer is coming off of a gem vs. the Cubs on Sunday night baseball where the nationals threw away a 3-run lead in the bottom of the ninth. You know Scherzer is upset about that and probably won’t even want to come out of this game. I really expect a gem here from Scherzer and he’s finally not SO expensive that I think he’s in play in both formats.

Cole Hamels has been great since joining the Cubs three starts ago. I don’t think a whole lot has changed for Hamels mechanically, but he definitely seems to be re-energized by joining a playoff caliber team. Hamels get a Pirates team in PNC Park. The Pirates do have multiple hitters that excel at hitting left-handed pitchers, but I’m not concerned about that with Hamels tonight, as he is one of the better ones in the league. This is a great ballpark shift for Hamels as well. He has struggled with home runs this season, but the park so very much limit that tonight.

Lance Lynn is another player that has been great since joining his new team. Lynn struggled early this season after not having a proper spring training but has been much better in the last 2 months. Lynn has a career ERA around 3.5 and is a legitimately good pitcher. People seem to have forgotten that after the first few months of the year, but this Lance Lynn looks really good and the spot is good too. Lynn is much better against right-handed bats, which Toronto has plenty of.

On DraftKings, RobbieRay should be the chalk and it is chalk I am playing. Ray hasn’t been 100% recently, but he is surely better than a 7.6K pitcher against the Padres. We have been targeting pitchers against San Diego all season and this is not at all a spot where we should stray away from that concept. I think Ray is a core play in either format tonight because of his massive upside at a rather low price tag.

SeanNewcomb is a really talented pitcher who is somehow $7.1K on DraftKings tonight. Newcomb has been a $9,000 pitcher all season long and is now priced towards the bottom of his price range against a Rockies team that struggles on the road. Newcomb struggled mightily in his last start, but that isn’t a big concern here I think Newcomb and Ray will carry very heavy ownership, but they are both great plays on this slate. I assume Newcomb will be less owned, and if that is the case, I want to have more of him than Ray.

James Shields has changed his pitches recently and is having more success because of it. Shields’ swinging strike rate has increased drastically and the Royals are one of the better spots to exploit new James Shields. James Shields isn’t going to be dominant, but I’d be surprised if he has a bad game. At this price point, he probably won’t kill you and he now seemingly has the potential to get 25 DK points.

The Angels vs. Rangers game should be full of offense. Both pitchers are really not good and this isn’t a great spot in any aspect. Let’s start with the Angels. Hutchison has allowed 15 runs in his last 13.1 and that trend really shouldn’t go away in this spot. I think the Angels are probably my top stack on the night. Shohei Ohtani always goes overlooked because his game logs are glitched. I love him in GPP’s tonight. Calhoun, Upton, Fletcher, Pujols, and whoever else are in the lineup are all viable one-offs or stacks tonight. The Rangers face what is basically a reliever. This can sometimes be a problem, but the Angels bullpen doesn’t scare me off of this spot. I really like the Rangers power as a one-off or as stacks. Joey Gallo, Rougned Odor, and Robinson Chirinos are my favorite plays from the Texas side.

The Indians face David Hess tonight in Cleveland. I love the Indians in this spot because of Hess’s lack of ability to get swings and misses. The interesting thing with Cleveland is trying to stack them. They’re either really expensive or a major pinch hit risk. This dynamic always leads me to play one outfielder that isn’t expensive and the catcher to save money, along with the top end guys. I think I will probably stick to that strategy tonight. Be careful in this spot, as the Indians should be rather chalky because of the pitching options today that allow you to save money.

The Nationals are in a great spot against Dan Straily. Straily isn’t quite a gas can, but he isn’t quite “good.” The Nationals offense, however, is good and I really like a few of them in this spot. The lefties are in a great spot. I will probably have a few Harper and Murphy mini-stacks in tournaments today. Harper has been on fire since the all-star break and Murphy is seemingly back to the form he has been in the previous few seasons.