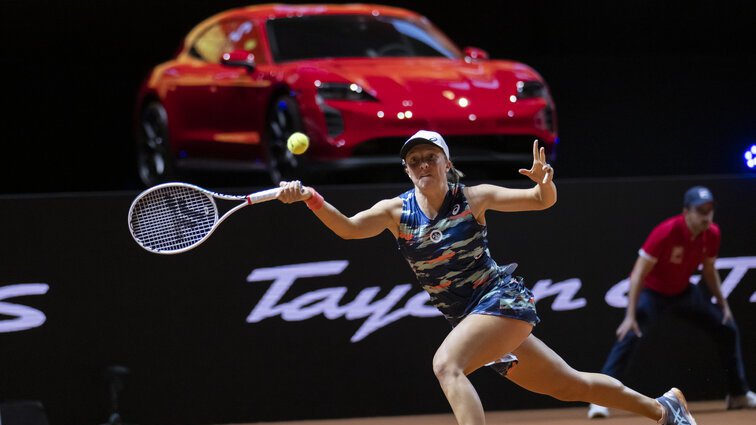 It may have taken over three hours, a comeback, and an imperfect performance, but #1 Iga Swiatek is a win away from her fourth straight tournament win and her 23rd straight match win. To achieve both of those things, she will have to see off #3 seed Aryna Sabalenka in the 2022 Porsche Tennis Grand Prix final in Stuttgart on Sunday.

During her 23-match win streak, Swiatek has had 17 wins in straight sets and entered Saturday’s semifinal against Liudmila Samsonova with 13 consecutive such wins.

But Samsonova was in no mood to roll over meekly, taking the first set 7-6 (7-4). Another extended set appeared to be on the horizon, but Swiatek broke at 4-4 in the second set and evened things up in the subsequent service game to send the match to a final set.

There, the two broke each other twice in the first six games, before four consecutive holds ensured another extended set. But in the 11th game of the deciding set, all it took was one small opening for Swiatek to get the break she needed, and she then served out a hard-fought 6-7 (4-7), 6-4, 7-5 win.

In Sunday’s final, she will meet Sabalenka, who lost out to Ashleigh Barty in last year’s Stuttgart final in three sets.

Sabalenka entered this tournament in shaky form, having won multiple matches in only one of her previous five tournaments.

But returning to a tournament in which she has previously done well and had points to defend has seen the world number four score three solid wins over 2019 US Open champ Bianca Andreescu, world number six Anett Kontaveit, and world number three Paula Badosa to reach another Porsche Tennis Grand Prix final.

How will today’s Stuttgart Open final play out? Let’s take a look at the match odds and other pertinent information.

Odds are via FanDuel Sportsbook. Other odds listed in this article may be from other top reviewed and recommended sportsbooks.

Odds to Win the Match

Can Sabalenka Make the Most of Small Openings?

While Swiatek had to sweat it out for over three hours and three grueling sets, Sabalenka had a slightly less grueling time of it in her semifinal win over #2 seed Paula Badosa, who went into the match as a slight favorite.

Both players had played two three-set matches in the previous two days, but if it had an effect on anyone, it was Badosa. She was up 5-3 and serving for the first set but was broken, then after taking a 3-0 lead in the first set tiebreak, won only two of the remaining nine points as Sabalenka claimed the first set 7-6 (7-5).

The pivotal stretch of the second set came at 4-4 with Sabalenka serving. Badosa had a break chance at 30-40 but didn’t convert it, and Sabalenka held to put the pressure back on her opponent. And in what proved to be the final game of the match, Sabalenka broke Badosa at love to close out a 7-6 (7-5), 6-4 win.

Given her shaky form in recent tournaments and the three-set matches she had to navigate on Thursday and Friday, it was quite the impressive win for Sabalenka.

It also followed a theme of the previous two matches. Sabalenka’s serve remains a major question mark, but she has done well to minimize the impact of her continued service struggles.

She has also done well to make the most of the openings that her opponents have given her in each match. Swiatek isn’t likely to be so generous on back-to-back days, so Sabalenka will need to be at her most clinical and clean.

Of the 16 career finals Sabalenka has reached in her WTA main tour career, this makes the third straight one on clay (only one of the first 13 was on this surface). So, she can more than hold her own against Swiatek if she brings her best.

But while her serve has not betrayed her thus far in Stuttgart, she has still had 20 double faults in three matches. And against an opponent like Swiatek, that is just flying a little too close to the sun to not get burned.

The 2022 Formula 1 season is only six races deep, but the race for this season’s championship alerady appears to be down to just two drivers. Last season, Red Bull driver Max Verstappen claimed his first Formula 1 World Drivers’ Championship in highly controversial circumstances, with Lewis Hamilton denied what would have been a record-breaking END_OF_DOCUMENT_TOKEN_TO_BE_REPLACED