Wimbledon Picks – 3 Of The Top 5 Singles 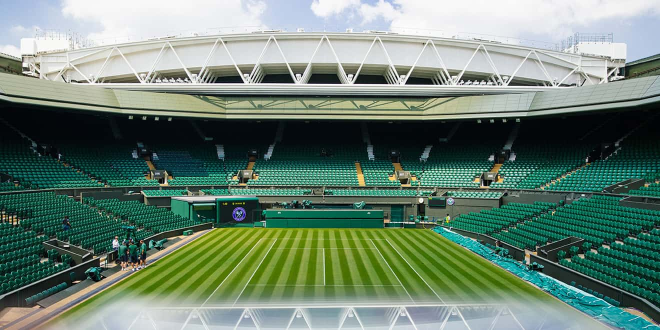 The ageless wonder, Roger Federer, 36, continues his Wimbledon title defence Monday from The All England Club. Federer is looking to clinch his 21st Grand Slam tennis title in his illustrious career.

The number one seed in the tournament take on the 22nd seed, Frenchman Adrian Mannarino in a round of 16 matchup. Federer beat Jan-Lennard Struff in straight sets Friday 6-3, 7-5, 6-2 in the third round.

Federer, currently ranked second in the ATP World Rankings to world number one, Spaniard Rafael Nadal, but the Swiss tennis star is eyeing his second Grand Slam of the season after winning the Australian Open for the second straight year in January.

Federer has been spent months preparing for Wimbledon, electing to skip the second Grand Slam event of the year, the French Open, to focus his time, energy and preparation for the grass court in London.

Federer has already clinched three titles this year. Including the Australian Open, he won the Rotterdam and Stuttgart Opens, and he has been defeated in two finals this year at Indian Wells in California and Halle in Germany.

Match is scheduled to start at 8 am ET on Centre Court.

Two-time Wimbledon champion, Nadal will take on Jiri Vesely in one of the eight round of 16 matches. Nadal put away Australia’s Alex de Minaur with relative ease winning in straight sets, 6-1, 6-2, 6-4.

Nadal reclaimed the world number one ranking in April, despite having to pull out of three tournaments, the Mexican Open, Indian Wells Masters and the Miami Open, but after Federer’s second round loss in Miami, the 32-year-old Spaniard was back to number one.

Nadal is also chasing his second Grand Slam title of 2018 after winning the French Open in June.
He’s chasing his fifth tournament win of the season after also winning in Monte-Carlo, Barcelona, and the Italian Open in Rome.

Nadal is having a strong season despite his earlier withdrawals, take the Nadal to win -1250.

Match is scheduled to start at 11:15 am ET on Centre Court.

Argentina’s DelPotro in fourth round for first time since 2013

Fifth seed, Juan Martin Del Potro has made the Wimbledon round of 16 for the first time in 5 years.

He’ll take on Gilles Simon on Monday after taking down Benoit Paire in straight sets in the third round.

Del Potro, 29, currently ranked fourth in the world rankings, has titles in Mexico and Indian Wells this year, has made one semi-final berth in Grand Slams this year, falling to eventual winner Rafael Nadal at the French Open, but got dropped in the third round by Tomas Berdych at the Australian Open at the beginning of the year.

Del Potro will be looking to build on his strong French Open finish, take Del Potro to win -700.

Number eight seed KevinAnderson will face France’s Gael Monfils, but despite being unseeded, the Frenchman’s got Anderson’s number. Anderson has only won a single set against Monfils in their previous five matches.

This matchup is a bit of a toss-up, but with Monfils having Anderson’s number, take Monfils to win +130.

American JohnIsner is trying to get deeper than he has all season in Grand Slams this year. His highest finish in the two previous tournaments was a Round of 16 loss to Del Potro at Rolland Garros and was knocked in the opening round in Melbourne.

The ninth seeded Isner takes on 31st seeded StefanosTsitsipas. The American is currently ranked 10th in the world rankings whereas Tsitsipas holds the 35th spot.

Expect this match to be tight, but take Isner to win -200.

Former world number one Novak Djokovic is looking to get back near the top of the tennis world after recovering from a 2017 elbow injury that forced him to retire from the 2017 Wimbledon quarter-final and forced him to miss the subsequent U.S. Open and the rest of the 2017 schedule.

Since returning from the injury in 2018, Djokovic has yet to win a tournament, but has one semi-final finishes and one finals loss, and says he’s been playing pain free for the first time in two years.

The three-time Wimbledon winner will take on Karen Kachenov in the fourth round.

Djokovic has been improving as of late, taking Marin Cilic to a third and deciding set just a few weeks ago at the Fever-Tree Championships, take Djokovic to win -714.

Japan’s Kei Nishikori is looking for his 12th career title and first Grand Slam win at this year’s Wimbledon.

He’ll take on Latvia’s Ernests Gulbis in the fourth round. Gulbis beat fourth seed Alexander Zverev in five sets to make it to the round of 16, whereas Nishikori took out 15th-seeded Australian Nick Kyrgios in straight sets to set Monday’s match.

This match is a bit of a toss-up, but Nishikori is the favorite at -350.

The Canada-U.S. trade war heats up, this time on the grass courts of Wimbledon as upstart McKenzie McDonald takes on 13th-seeded MilosRaonic.

The Canadian is coming off a four-set victory over Austrian Dennis Novak, where Raonic lead the way with 28 aces.

McKenzie has been a pleasant story over the tournament, but hasn’t faced any seeded players, nevertheless anyone of Raonic’s caliber. Take Raonic to win -955.