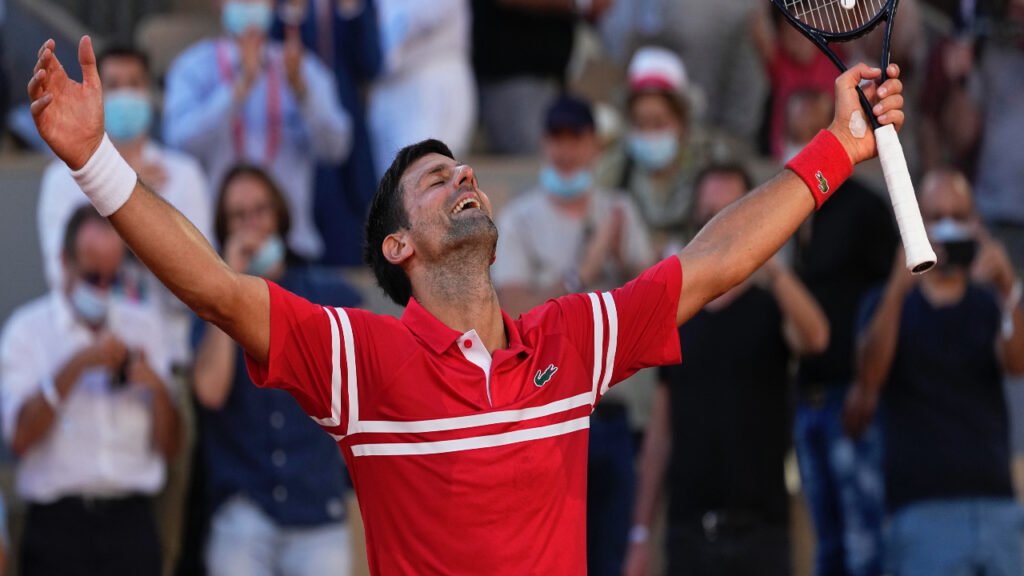 When it comes to debates about who is the greatest men’s tennis player of all time, Roger Federer, Rafael Nadal, and Novak Djokovic can all lay some claim to the argument.

Federer has owned grass courts more so than the others. Nadal is the undisputed King of Clay. But from a statistical perspective, Djokovic has had more all-around success on clay, grass, and hard courts than Federer and Nadal, and he has spent more total time atop the ATP singles rankings than his fellow GOATs. Still, there’s plenty to split hairs about, as with the Messi vs Ronaldo debates and others.

That said, Djokovic has a pretty strong claim. And thanks to his French Open men’s singles final win over Stefanos Tsitsipas yesterday, that claim is stronger.

It also positions him to have the biggest claim in three months’ time, if he backs up the odds.

Yesterday’s win gave Djokovic his 19th career Grand Slam singles title. He still sits one behind Federer and Nadal, who sit together at the top of the list with 20 each. But his triumph makes him the only men’s singles player in the Open Era of tennis–the era of professionalism in tennis, which started in 1968–to have won the career Grand Slam twice. Federer has only one French Open title to his credit, which came in 2009. Nadal’s only Australian Open win was also in 2009.

With the French Open title now in hand, the first two Grand Slam men’s singles titles of the year belong to Djokovic. And according to Wimbledon odds and US Open odds, he is a strong favorite for the last two Slams. If he can win them both, he would surpass Federer and Nadal with 21 titles.

And for the cherry on top? The two titles would make him only the second men’s singles player in the Open Era to capture a calendar-year Grand Slam, joining Australian legend Rod Laver.

Wimbledon odds are via FanDuel Sportsbook as of Monday, June 14 at 5:00 pm ET

Are Djokovic and Federer on course for another classic Wimbledon clash?

Federer is the likeliest challenger this time around. Federer has not played much tennis this year, as the French Open was only his third tournament of the season. In fact, given that he did not play in another tournament last year after losing to Djokovic in the Australian Open semifinals–which was his lone tournament in 2020–he has played in all of five official events over the last 19 months. That includes his 2021 grass debut at this week’s Halle Open in Germany, where he edged 90th-ranked Ilya Ivashka 7-6 (7-4), 7-5.

Federer is certainly not the dominant force he once was, but it would be silly to doubt him on grass, which is his best surface. The Halle Open will be a good barometer for Federer, who has won the event a record ten times. Medvedev is the top seed, while French Open semifinalist Zverev is the third seed. Tsitsipas, who moved to #4 in the world with his French Open run, would have been the #2 seed but withdrew due to personal reasons.

Medvedev, Tsitsipas, Nadal could all challenge Djokovic at Wimbledon

Beyond Federer, Medvedev merits a lot of consideration. After four straight first-round exits at the French Open, Medvedev reached the quarters this year, losing in 3-6, 6-7 (3-7), 5-7 in a very competitive match against Tsitsipas. Medvedev has made a lot of strides over the last two years, and his French Open run was the latest example. His breakthrough as a Grand Slam champion appears to be inevitable, as is the case for Tsitsipas.

Speaking of Tsitsipas, he has reached at least the semis of the last three Grand Slams that have been played: the 2020 French Open (played in September and October last year) and the Australian and French this year.

Nadal is not to be dismissed either, even though grass is not his favorite surface. Nadal reached the Wimbledon semis in 2018 and 2019, and he will no doubt be hungry to make up for his disappointing loss to Djokovic in the French Open semis.

Defending champion Thiem the man to down Djokovic at Flushing Meadows?

Thiem made his Grand Slam breakthrough at last year’s US Open, overturning a two-set deficit in the final against Zverev. It was a momentous achievement for Thiem, who had lost his first three Grand Slam singles finals.

To refresh the memory, Djokovic missed out on a deep US Open run due to a fourth-round disqualification. Were it not for that, he could have been in line to hold all four Grand Slam titles at once with a Wimbledon title win.

In any event, it’s Thiem who holds the US Open title, and he stands an excellent chance of defending it. He surprisingly went out in the first round of the French Open, and he isn’t among the top Wimbledon favorites because grass is not his favored surface.

But he should be in the mix to challenge Djokovic, along with past winner Nadal, past finalists Medvedev and Zverev, and rising star Tsitsipas.

However, all challengers face a tall task to stop Djokovic at Wimbledon and the US Open. After rallying to win in the quarterfinals, semifinals, and final at the French Open, it is clear–as if it wasn’t already–that it will take an extraordinary effort to keep the world number one from making history over the next three months.