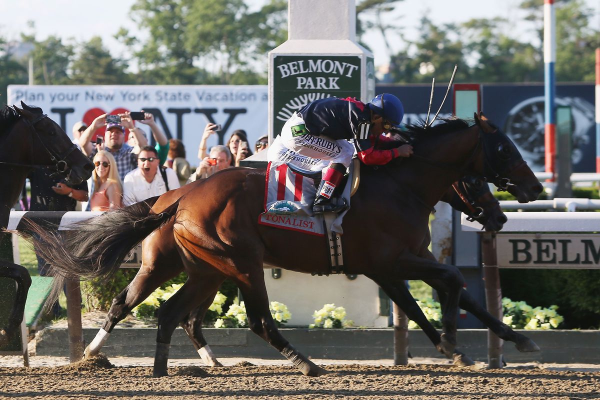 The next to last race on the Belmont Park card today is the main event, the 2018 Empire Classic Handicap.

The best New York state bred horses are facing one another, some for the umptieth time.

Recently, it has paid off to be on the lead or near the lead at Belmont Park but today’s contest features a ton of early speed so I expect a horse coming from behind to win it.

The two morning line odds favorites have a great chance but a more surprising winner could come from further behind at long odds.

Number 1, BLUGRASCAT’S SMILE will make his stakes debut and appears completely outmatched. He has late speed but I am not sure he will be able to catch many today…. Win no win in the last 6 months despite competing in lesser class, it is hard to believe in BLUGRASCAT’S SMILE.

Number 2 CALCULATED RISKER also steps up in class and might have a shot at a podium if the grounds were heavy as this is kind of his specialty. Unfortunately for him, today is a dry day at Belmont Park and therefore we need to see his prospects in light of his only in 12 dry starts… It looks very difficult for CALCULATED RISKER.

Number 3, CONTROL GROUP likes to go to the front and he has the advantage of a good post position to try that. Unfortunately for him, there is a lot of competition for the lead and there is only so much his star jockey can do. CONTROL GROUP finished second in this race last year and generally runs well fresh but I think that the pace will be his demise today.

Number 5 TWISTED TOM has been scratched

Number 6, EVALUATOR closed very strongly in his last race despite the leader having been able to set some easy fractions in the race. Today, the hot pace should favor EVALUATOR a lot more. EVALUATOR works for a very hot trainer and a top jockey gets the mount, so we can expect that EVALUATOR is ready to go. He is at an age disadvantage in this one so it will not be easy but he could surprise with a place on the podium and the price should be good.

Number 7, WINE NOT fought throughout for the lead in the race in August against half of this field but faltered quite badly. He came back in a lesser class last month and did not do well so I believe that his chances are slim today. He might once again contribute to a hot pace however.

Number 8, SEA FOAM was left alone in front and able to set some decent fraction when he raced two races ago against Evaluator. Today, he will not be left alone and his early speed will probably hurt him, especially starting from the outside. In his last race , at a higher class, SEA FOAM had to fight for the lead and faltered. I expect the same to happen today despite the recent success of his trainer with others.

Number 9, HIT IT ONCE MORE will be one of the horses likely to set some hot early fractions and he has the disadvantage from starting from the outside to boot. HIT IT ONCE MORE has never won when challenged for the lead so I expect him to falter sometime before the finish line despite his competitive speed figures.

Number 10, PAT ON THE BACK was barely beat by Can You Diggit in their last race but he actually had to travel wider and still finished a good second. PAT ON THE BACK is always there near the top in this class category and everything points to the fact that he will be fighting for the top spot yet again. With his trainer on a hot streak as of late, we can bet that PAT ON THE BACK should be ready to go. We only need him to settle nearer to the inside and not lose too much ground on the turns…

Number 11, MR BUFF comes up in class at the wrong time considering his early speed and the unlucky starting position. His last race was surprisingly poor but even if he can go back to his best, I am not sure it will be enough.

There is a lot of early speed so I expect the winner to come from behind despite the track bias that appears to be present at Belmont Park.

Of the come from behind horses, I believe that PAT ON THE BACK is the best but he might once again have an unlucky trip and fall short.

A surprise could come from EVALUATOR. He will not been near the lead but he has shown a ton of late speed in his last race and he can overtake all the tiring horses to get a place on the podium at interesting odds.