Picks for the 2018 Pegasus World Cup at Gulfstream Park 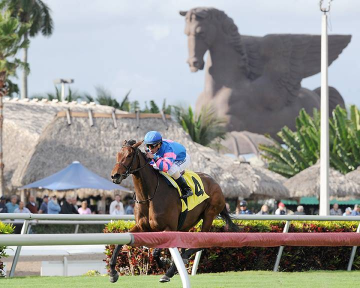 UPDATE @12pm: Rain is expected for the whole day and we will most likely have a sloppy track. My top pick, CITY OF LIGHT, is unexperienced in the mud but his pedigree is pretty suited to these conditions. Still, it might be worth taking a bit more prudent approach and decrease win bets.

The richest horse race of the year is coming up in beautiful Miami Florida. Horse racing fans are in for a treat as they will witness a very competitive race with 12 of the best horses in the world.

This Grade 1 event is run on a mile and one eight with the horses starting very close to the first turn. That should advantage horses able to grab a good position near the rail and damage the chances of those parked outside. Also of note, the Gulfstream Park track bias tends on the routes tends to favor horses coming from behind but there is little early speed to help set that up today. We should see a strong finish in the stretch but one of the favorites might be able to score a mild upset and go all the way…

Number 1, BRAVAZO has been working out very well recently but he has not raced in 2 months and has actually not won a race in almost a year… BRAVAZO has some late speed which will come in handy here and can save all the ground in the world but he has never run fast enough to compete for the top spot today and therefore his chances of even reaching the podium are limited.

Number 2 SOMETHING AWESOME is another one with late speed but he is actually coming up in class for this one and he was not even destroying fields at the lower level. SOMETHING AWESOME is 8 years old and we can’t expect to see a much-changed horse today… It looks like he is completely outmatched and can be disregarded.

Number 3, CITY OF LIGHT is one of the main contenders in the race and draws a great post position. Looking at his workouts, CITY OF LIGHT is very sharp and the rest since the last race is good to see as he runs quite well fresh. Paired with one of the best jockeys in the world and able to stay close to the lead (or take it), CITY OF LIGHT has the versatility and class to win this race. There is not a lot of early speed in the field so it is possible that CITY OF LIGHT will be left alone in the lead. He has beat many of the other runners in the race before, including the favorite so he could take them all the way or just pounce in the stretch. There is a very strong opponent in Accelerate but I expect CITY OF LIGHT to be at least in the top three today. His barn has started 2019 quite strongly so if that success can rub up on CITY OF LIGHT, he might be able to score a mild upset.

Number 4, SEEKING THE SOUL got beat twice in a row by some of today’s opponents but he does have some class having won and placed in Grade One races in the past. Despite the quality workouts since the start of the year, it looks like an uphill battle for SEEKING THE SOUL. He does not project to be able to run fast enough to beat the field in this Pegasus World Cup and even a place on the podium looks difficult.

Number 5 ACCELERATE is the morning line odds favorite with good reasons. He has won 4 Grade 1 races in a row and pretty decisively every time. The workouts since the last race are very good and ACCELERATE is once again paired with the jockey who led him to the winner circles three times last fall. The distance of this Pegasus World Cup is a piece of cake for ACCELERATE and his running style should be well suited for a win. We should see him battle it out in the stretch with CITY OF LIGHT and on paper, ACCELERATE has the upper hand in that fight. But it will not be easy and it will only help if the early lead is a hot contest in front of him.

Number 6, TOM’S D’ETAT faces a tall hurdle by choosing to try his first stakes race at the Grade 1 level and choosing the Pegasus World Cup, no less. TOM’S D’ETAT has trained well recently and is proven at the distance but that’s about all the positive we can say. His two races last year after a long break were dominating but the class was miles from today’s so we can probably just write off TOM’S D’ETAT here.

Number 7, TRUE TIMBER came close to winning his first grade one stake last month bit tepid workouts since might indicate that the effort took a toll. On a good day, TRUE TIMBER might be good enough to grab a podium at this level but there is such a strong field here that it is not wise to bet on such an outcome today.

Number 8, GUNNEVERA must be hoping to have a better 2019 than last year’s campaign as his only win came at the optional claiming level… His last race of the year was his best so maybe GUNNEVERA is coming back in form? Strong workouts since say that he is sharp. GUNNEVERA has done his best racing at Gulfstream Park but the distance is a challenge. With the form still in doubt and distance as well, I prefer to stay away at relatively low odds.

Number 9, KUKULKAN is the only import trying his luck in this Pegasus World Cup. He arrived in Florida last year and proceeded to destroy the only field he faced on this Gulfstream Park track. KUKULKAN is a specialist at this distance and is paired with the most famous jockey in the world and works for an in-form trainer. Will that be enough to do well today? He is unbeaten in 14 races in Mexico but the quality of racing down there is pretty different… His only win in the US was in a very, very, slow time so it is not particularly encouraging. A win would be quite an upset but seeing a horse unbeaten for 15 races would be fun…

Number 10, AUDIBLE is one of the young horses in the field and has yet to crack 100 on the Beyer Speed Figure scale. His pace profile is not too bad however and he would have been able to place himself into contention had it not been for the luck of the draw which pushed him well outside. AUDIBLE knows the track and is paired with an in-form jockey but that will probably not be enough to do well today.

Number 11, IMPERATIVE is on the other side of the age scale, being one of the oldest in the field. With no victory in 2018 despite trying lower class races, we can’t expect much from IMPERATIVE today, especially not starting from this post position…

The two morning line odds favourite deserve that prediction by the Gulfstream Park track handicapper. They both have tremendous past performances and suitable profiles for a win today. The rest of the field looks completely outmatched…

Among the main contenders, I want to take a bet on CITY OF LIGHT, the likely second betting choice. CITY OF LIGHT can win on the lead or coming from behind and there is very little early pace competition. It is possible that CITY OF LIGHT could take the lead relatively early in the race and just hang on to it.

Of course, just at his heels the whole time will be ACCELERATE. He is probably a better horse than my top pick but I think that the race scenario is a bit less favorable to him. Still, it is clear that he should be on the podium, bar a disaster.

After the Novak (or Novax?) Djokovic visa saga dominated pre-tournament headlines, we can finally look forward to some on-court headlines as the Australian Open gets underway. Djokovic news has taken the focus off of the tournament, which is certainly understandable. After all, the fate of the world number one and top seed would significantly impact END_OF_DOCUMENT_TOKEN_TO_BE_REPLACED