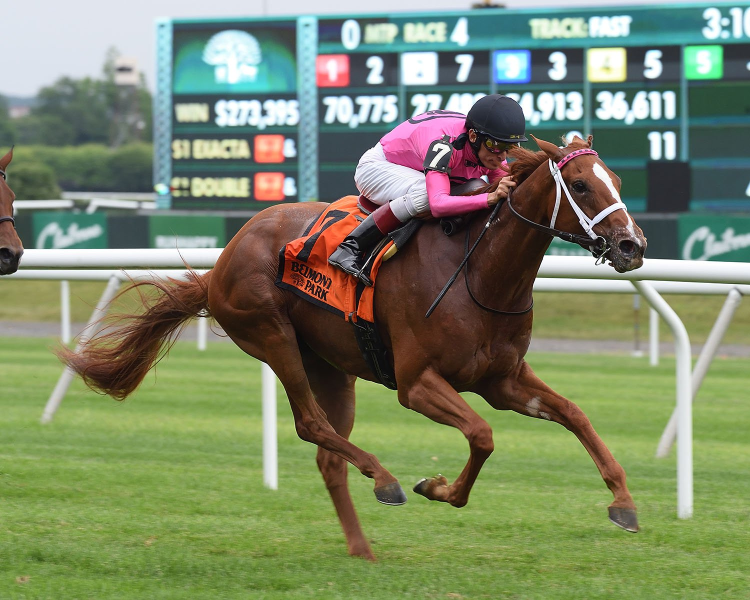 There is a lot of early speed in the Mile race supposed to run on a wet turf track. One speedster has been scratched but there should still be enough early speed to open the door for the late runners.

On any given day, the hot pace should setup the race for a horse coming from behind in the stretch but on the tiring surface, it is even more likely today. We can expect clumps of wet dirt and grass being thrown around however so maybe it will be good to be out of the way on the outside of the pack rather than in?

In any case, the favorite looks strong but fitness is in doubt so a relative outsider might come in at interesting odds.

Analysis and picks for the 9th race at Belmont Park on October 13 2018:

Number 1, SOUPER STRIKING has been racing at this class level all year and has had decent success, winning and placing in similar company. In her last two races, she tried some new surface and distances but did not fare well so maybe the return to the turf mile can help her. SOUPER STRIKING has early speed and the inside post position but she will get some competition for the lead today. Still, a look at the workouts and the trainer’s recent form say that she has a better chance than what the morning line odds indicate.

Number 2 STELLA DI CAMELOT will make her first start in America, working for the best New York trainer and she shows some good workouts leading to this one. Turf racing is a lot better in Europe than it is in the USA but STELLA DI CAMELOT is technically stepping up in class here. Also to note, European breeding is not designed to produce horses that compete too young so SETELLA DI CAMELOT might not be as good young as she will be when she ages. A Europpean horse is always a threat, especially when working for a top trainer so it might be wise having her on the exotic bets but on paper, STELLA DI CAMELOT is not the best horse at Belmont Park today.

Number 3, KITTEN’S COVERGIRL tries the stakes level for the second time today and disappointed in her first try. She has some early speed and that will mean taking part in a hot pace early which should hurt her chances.  KITTEN’S COVERGIRL has been doing her best racing at the distance and at Belmont Park so there a plus but based on class and pace profile, I think it will be difficult for her today.

Number 4, COOL BEANS has been scratched

Number 5 ANDINA DEL SUR comes off a series of poor races with little excuses but these were at higher class categories. Before that she actually managed to win and place in graded stakes company. If ANDINA DEL SUR is back at her best she has a chance, but the workouts and trainer form are not really good… A pretty good jockey agrees to be on board however so maybe there is something there?

Number 6, GOT STORMY won her last race, a Grade 3 stakes easily, coming from just behind the pace despite a pretty slow race by the leaders. GOT STORMY actually has 3 wins in a row at this class level or better and does great on this distance. For some reason, she was given a break of over 2 months since the last win and the workouts are not particularly impressive since so there is a question mark there. Also in question is her liking of a wet surface but based on class, GOT STORMY is a major threat today.

Number 7, GOODTHINGSTAKETIME has been scratched

Number 8, VICTORINE will make a second start in the USA after a career in France where she has done ok at higher class levels. She was moved to the barn of one of the best turf trainers in America and we can therefore expect her to do even better than her pretty good first attempt here. VICTORINE did well considering the conditions in that last race, a Grade 2, so we can expect the class to be easy for her today. She ran outside all the way and still was able to gain ground in the turn against a slow pace. VICTORINE should be very comfortable on the heavier ground and the stamina is no problem. She should do well today

Number 9, CLOSER STILL is going back to a route race and we can therefore expect her to be pretty fast early. She has done ok at the class level but the distance combined with a heavy ground is a concern…. CLOSER STILL will probably be parked outside, vying for the lead and falter in the stretch or earlier.

Number 10, MONTE CRISTA likes to sit just behind the leaders, a good strategy usually, but starting from the outside post today will make that difficult if she does not want to run on the far outside all the way. MONTE CRISTA won her last race, at a slightly lower class level and has a great record at the distance so we should see some heavy betting on her. Working in her favor is the recent success of her trainer and jockey so we should see the best of MONTE CRISTA today. The longer than usual break between races, outside post position and class are a concern however.

Number 11, SIGNIFICANT FORM has been scratched

Number 12, ALTEA has never won in American but came relatively close at the Graded stakes level, She was beaten repeatedly by others in this field however. ALTEA works for the best trainer this year but she has been on vacation for almost two months and her workouts are really not great so fitness is in doubt too. The far outside post position should not help so it is probably better to pass on ALTEA today.

The favorite, GOT STORMY has strong credentials but she was given an extending break and that raises some concerns. She is a class above most of the field however so assuming that she is reasonably fit, she should manage to fight for the win.

But given these doubts, I actually prefer VICTORINE, who makes a second start in the USA. She comes down in class for this one and switched trainers to work with one of the best in the US turf business. She has all the qualities needed to win today.

To spice up the exotic bets, SOUPER STRIKING is a good choice. She will be part of a pretty hot pace and might not be able to hang on for the win but a place is not out of the question based on class and workouts.

WIN BET at 4-1 or more on Number 8 VICTORINE