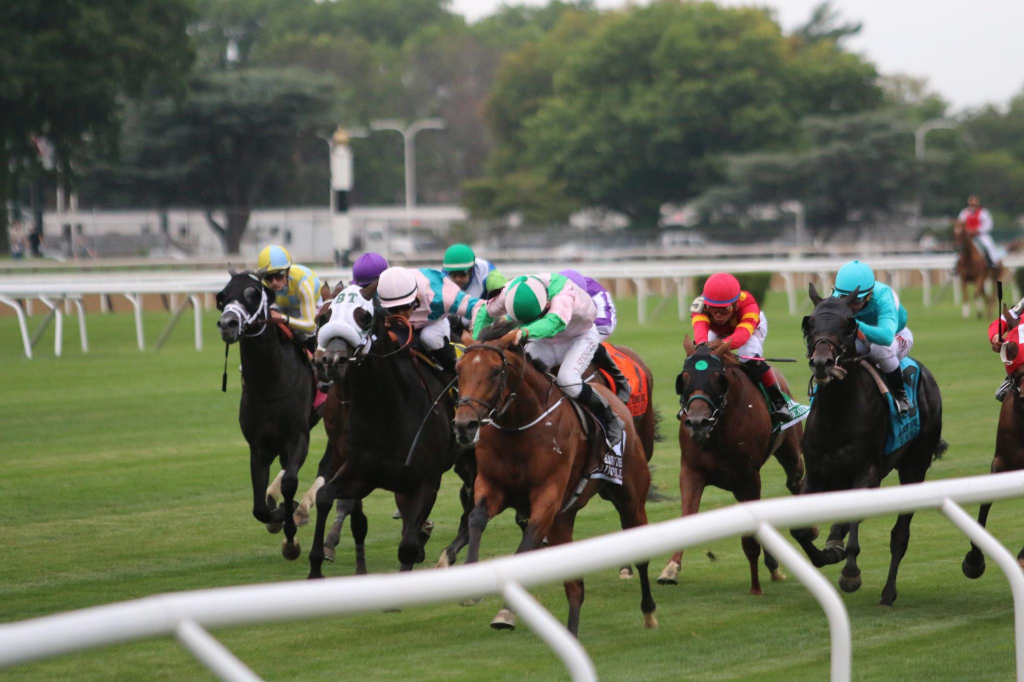 The summer is gone and the New York circuit is coming back down from Saratoga to the usual confines of New York City.

With only one day passed in the meet, we will have to be careful not to bet too much on an hypothetical Belmont Park track bias but if the last couple of years are any indication, the outer post positions should favorable and horses coming from behind should fare better.

The weather forecast is grey but dry so we can expect this turf sprint race to go on the grass without trouble.

There is a lot of early speed in this race and that should setup the pace just right for a couple of good horses and one live longshot.

Analysis and picks for the 4th race at Belmont Park on September 8 2018:

Number 1, REED KAN spent the year 2018 oscillating between stakes races and good optional claiming races but was inexplicably entered for a straight claiming price of $30 000 last month in New Jersey. He won that race, of course, and is now back to the stakes class level which is a strange pattern. REED KAN will no doubt go to the front and fight throughout and thankfully for him, the rail might be a small advantage considering that he tends to weaken in the last furlong. There is a lot of pace competition in this race today and the race is most likely going to be too long for REED KAN.

Number 2 DIRTY makes a second attempt at stakes glory and given his versatile style, he might be able to sit tight just behind the warring pace setters and swing in the stretch for the win. One element of concern is his fitness, as DIRTY seems to have been rather dull in training recently. Before every big performance, DIRTY has shown at least one good workout line and here we don’t have any showing. We have Javier Castellano on board however and the fact that the best Belmont Park turf jockey is paired with this horse is pretty encouraging. DIRTY has a good chance based on pace handicapping but the fitness level is in doubt

Number 3, WEATHER REPORT took a stab at turf racing last month and appears to have loved it, easily dominating his race. The class level was not so impressive however and before that WEATHER REPORT was actually offered to claim for only $7500. Maybe the new trainer saw good turf potential and if so, kudos, but today is a hard spot for WEATHER REPORT. The class jump is pretty severe and he also seems to be a one speed horse who will face a lot of competition for the early lead. If indeed turf is the miracle surface that he needed, maybe WEATHER REPORT can surprise at high odds but based on pace scenario and class I doubt it.

Number 4, GIDU comes way down in class after spending an unsuccessful summer at Saratoga and in the UK, though competing in classy Graded stakes races. Back at a class level wherehe has performed well in the past and back at Belmont Park where he has won in the past, we can expect GIDU to fare better. The jockey will need to tame his early pace to have a good shot however and hopefully will recall that he won twice with GIDU while being a bit more patient. Playing in GIDU’s favor, maybe, when it comes to pace: he has run on longer distances recently so he might naturally fall back a little bit and conserve his energy. GIDU has the class to win it, no doubt, his likelihood of success will depend on the rider’s strategy but Velazquez knows this track inside out and we can bet he will chose wisely.

Number 5 WORLD OF TROUBLE is yet another early speed horse in this race, but he is the one with the best credential among the group. WORLD OF TROUBLE won last month at Saratoga against some of this field and has always fared well at this class level, without demeriting as the class above by the way. Still, his running still might put WORLD OF TROUBLE In trouble today as he will face a lot of pace pressure early and will likely be parked outside on the turn, which can’t help. WORLD OF TROUBLE might be the favorite today but I think that his chances are not that good considering the pace scenario.

Number 6, COLONEL TOM is one of the horses likely going to put early pace pressure in the race but if we think that World Of Trouble will be hurt by this scenario, the situation is even worse for COLONEL TOM. He has been racing at lower class levels and never won having to race fast early. Starting from the outside with multiple fast horses inside of him will push COLONEL TOM to the middle of the track on the turn and we will likely see him weaken in the stretch.

Number 7, TOTALLY BOSS lost against a few of today’s competition but it was pleasing to see him continue well in the stretch and gaining a bit of ground after having been parked three wide in the turn, blocked by a huge field. Today, TOTALLY BOSS should have an easier trip despite once again starting from the far outside and he will likely be able to save some ground on the turn this time. Also encouraging is the fact that he switch trainers to one who has had great success in turf sprints at Belmont Park. Add to that the strong workouts and the pairing with a hot jockey and you start to very much like the chances of TOTALLY BOSS, considering his underdog status. TOTALLY BOSS seems to be capable of late speed and against this field, he is likely to overtake many, if not all. It is a longshot but TOTALLY BOSS seems capable to grab a podium here.

In all likelihood we will see sparks flying early in this turf sprint as many horses will fight for the lead. That should create a mess on the turn and tire all the front runners to let others swing by them.

Who these horses will be is not 100% clear as there are some question marks on running style, class and fitness.

DIRTY probably has the best shot at winning this race, granted that he is fit and healthy, which is not certain based on the recent workouts. His versatile running style should be perfect for that contest however so if DIRTY is fit, he should win it.

GIDU has had a rough summer but comes back down many class notches and should have a much better chance today. The jockey will need to keep him patient but if he does, GIDU should be in a good position to strike in the stretch.

The most interesting, and risky, bet in this race is with TOTALLY BOSS. He definitely does not have the class of the two aforementioned horses and it is not certain that he has enough late speed to take advantage today. But based on trainer patterns and the pace scenario, I think that TOTALLY BOSS is a live longshot worth betting on.