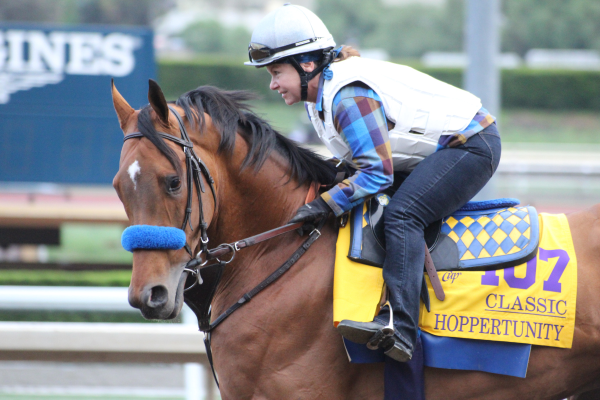 The 9th race of July 7 at Belmont Park is another Graded Stake route, the Suburban G2 which draws a field of 11 high quality horses.

The favorite is likely to be challenged for the lead early, but he has shown in the past that he has what it takes to take down a G2 route from start to finish.

With a proven track record, the highest speed figures of all and one of the best trainers in the world, can someone hope to take down DR. DORR?

Number 1, NAME CHANGER is making a step up class wise and it sure looks like a difficult step. He won two in a row pressing the pace but that was at much lower class levels. The speed figures were certainly not good enough for this field. At 5 years old and 13 races, it is doubtful that NAME CHANGER can really progress a lot. He could be in the mix for places but for the win, he seems completely outclassed.

Number 2 WAR STORY comes off two places in Grade 2 stakes company and has won one last year at Belmont Park, on the classic 1.5 miles distance. Here, he is cutting back to a distance where he never won or placed so it is hard to trust him today despite the very good speed figure earned last year in the Breeders’ Cup Classic at Del Mar at this same distance. WAR STORY likes to press the pace and here he could have an opening if the pace collapses in front of him but he will have less runway than he is accustomed to. He is however better placed on the inside today so maybe he will have the extra kick needed to prevail, plus he works for a trainer who has been on fire recently… He was however bested by one of today’s opponent the last time and barely held off another so whether or not he can beat them all today remains to be seen.

Number 3, ZANOTTI does not have a win so far in 2018 despite working at lower class levels than today’s race. He was given a 2 months rest for this one but does not show much workout quality since so the form is a question mark. This 5 years old gelding is not likely to radically progress, so it looks like he will come short today at a much higher class level than he has ever found success at… He has been running closer to the pace in recent races so it is possible that ZANOTTI will make it hotter but I would not bet on him to go all the way.

Number 4, TAPWRIT, has been rested after a busy 3-year-old campaign which saw him take down the Belmont Stakes and run decently in the Kentucky Derby and Travers. He relaxed for a few months and came back in an optional claimer that he failed to win but one can imagine that it was merely a warmup? Plus he had a rather bad trip in that race. The trainer Pletcher has used this warmup trick in the past but it does not work every time… If TAPWRIT is back at his best, he can dispose of this field and his closing style might come in handy if there is a very hot pace. TAPWRIT is to be included in the exotics but I am not sure I would like him for the win at the 7-2 morning line odds…

Number 5 DR. DORR presents the highest speed figure of the fieldlast time out and posted it in one of the most difficult Grade 1 races, the Gold Cup. He came up short in it, but he did display his blazing early speed. Before that race DR. DORR destroyed the field in a Grade 2 so, class-wise, he has what it takes to win it today. He mostly has won with fast early speed and maintaining the edge to the end. He has fended off pressure successfully in the past, just not at this distance. Sharp workouts and the fact that he works for one of the best trainers in the world and with a hot jockey say that DR. DORR has a prime chance if he can take the lead without pushing the pace to unsustainable levels.

Number 6, DISCREET LOVER has been working hard in his 5 years of existence with 40 races under his belt. He has a few stakes win including a Grade 3 win this year, coming from off the pace. DISCREET LOVER did not ridicule himself in the Metropolitan Grade 1 last month either so there are some things to like but he seems to be a few notches below the opposition in terms of class and speed figure. DISCREET LOVER has been racing with decent early speed late last year so maybe he can stay close to the action and capitalize on a pace collapse, but he is not the most likely candidate to win, even in that scenario.

Number 7, TAKE YOUR GUNS is unplaced in a stakes race of any kind so far in his career but he is lightly raced so there is the possibility of further improvements for the 4-year-old colt. In his last race, he finished 4th behind two horses that he competes again with today, though he did not have the best of trips that time. His Jockey and Trainer are having a great season together so the confidence must be there and TAKE YOUR GUNS has every right to progress considering he is still relatively young. He could be a good pick at a good price.

Number 8, HOPPERTUNITY has bested a couple of today’s field in his Grade 2 win last month right here at Belmont Park. It was a solid win and HOPPERTUNITY has also won decisively at the lower class level, as well as placed at Grade 1 level last year. He is in the right class category and has never lost at Belmont so far, so he seems to like it here. He kept some pretty sharp workouts since the win last month and works, like others, for one of the top trainers in the business. Reunited with the jockey of his last win, HOPPERTUNITY has an excellent shot at this race, granted the pace in front of him is hot enough for him to close hard in the stretch as he usually does.

Number 9, SORRY ERIK is making a massive leap in class today, having never placed, let alone won, in a stakes race… SORRY ERIK led all the way in his last race at a lower class but he took the lead relatively easily and he will have to do a lot better to lead the pack here. SORRY ERIK might spoil the pace for others but the most likely scenario is probably that he be no factor at all, throughout the race.

Number 10, DIVERSIFY has an impressive winning record at the Belmont Park track and overall in his career. He won a Grade 1 last year right here, at the same distance, going wire to wire on the rail. Here, he starts from the outside so he will probably have to push harder to take the lead as he likes. The bullet workout this week shows that he is very sharp and we can expect that he will gun for the lead right away and he has the pace to take it. His track record at the highest levels of racing is not so bright when he is under pressure and today it is unlikely that the lead will be given to him on a silver platter. DIVERSIFY has a decent shot but he needs to overcome the outside post position and dictate a relatively moderate pace to keep all the others at bay.

Number 11, THE LIEUTENANT comes off a Grade 3 win on the synthetic where he posted a lifetime best speed figure. Before that, he did not have much success at the stakes level so it is hard to believe that his class level is on par with others. He did however publish a solid workout 1 month after the win which indicates that he maintained his form. The come from behind style might be useful to claim a place if the pace is hot, but looking at THE LIEUTENANT overall profile, it is hard to believe that he can best everyone to the wire.

As often, it should all come down to the pace.

Cold, horses like DR. DORR or DIVERSIFY should be able to win it all (with an advantage to DR.DORR on the inside and a more agile profile)

Hot we can expect the closers like TAPWRIT, TAKE YOUR GUNS or HOPPERTUNITY to steal it in the stretch.

Handicappers ought to pay attention to scratched horses because if one or two of the early speed horses do not run, it will change the dynamic entirely…

But with the participants as they are on paper, I tend to believe that there will be a hot pace and we could see a semi-upset by TAKE YOUR GUNS or HOPPERTUNITY.

TAPWRIT has a ton of quality but the second race after layoff angle is not a given and I expect his odds to be hammered down by the betting public which might remember his Belmont Stakes win last year.

WIN BET at 5-1 or more on Number 8 HOPPERTUNITY

(In multi race exotic bets, I will take a prudent approach and add DR. DORR to my mix for the win)