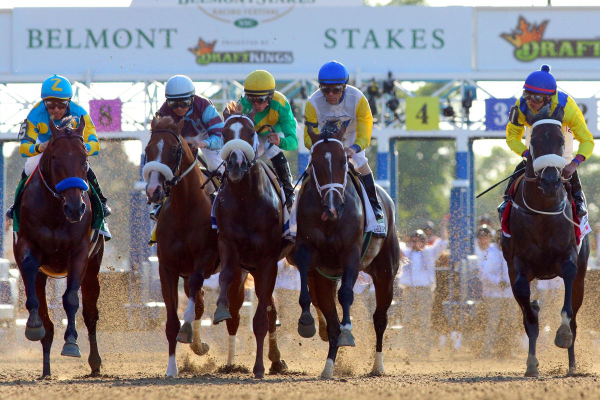 This Grade 1 turf route is drawing a nice field at Belmont Park and it should be a very exciting sprint finish for these fillies.

Over half of the field comes to us from abroad so there will be some guesswork needed but it looks to me that only a couple of the horses have legitimate claims to win this thing.

The race is run on the inner course of BelmontPark so a decent start and a striking position on the rail should be an advantage. Be parked outside and it will be a long race…

In the 8th race of BelmontPark on July 7 2018, the field notes are as follow:

Number 1, SIGNIFICANT FORM somewhat does have significant form and she was never been unplaced when racing at Belmont Park. The distance is new however and the loss last month at this track is hard to excuse as SIGNIFICANT FORM had all chances and could not close the deal as a heavy favorite. She won a Grade 3 but that was at 2 years old and the recent performance does not tell me that she has what it takes to win this Grade 1. She luckily draws the rail which is a plus on the Belmont Park Inner Turf but I think that her luck will run out around the stretch.

Number 2 CHIPOLATA travels all the way from France to make her start in the USA but I believe that she should have picked an easier spot. She never won, or placed, in Graded Stakes company and has not won in a year. Granted, the turf racing in France is very competitive but it is a bit presumptuous to think that CHIPOLATA can repeatedly fail at lower class levels and succeed in her first American race in a G1… Except that she knows the distance, I don’t see any redeeming factors in CHIPOLATA and it is a hard pass for me today.

Number 3, PAVED has a very good lifetime record with 3 wins out of 6 races and 3 shows. She is unproven at the distance, or at Belmont Park for that matter, coming to us from the West Coast. PAVED won a good Grade 2 race last month and came out very sharply off it if the bullet work 2 weeks ago is any indication. The distance will be a bit longer today but with post position 3, PAVED should be able to find a spot near the rail to conserve energy and stay close to the action. If she can find an opening in the stretch, PAVED can grab the lead and maybe fend off the hard charging horses coming from behind. At 12-1 morning line odds, I think that it would be a very good bet.

Number 4, CAPLATEMPTRESS is coming back to our shores where she won a Grade 1 at 2 years old. She lost her next two starts but was facing some strong opposition in both. There is no telling if she has progressed in the two month since her last start of if she travelled well, as there is no published workout on her. She is stretching out quite a bit for this start and with a question mark on the form, I think that it is better to watch her run today and pass on the betting.

Number 5 TOINETTE was given a two month break after a narrow win on a Grade 3 which may have taken a toll? At least the workout since do not show a lot of juice… For some reason there is no video available of her last win, where she is said to have faced trouble, so it is impossible to tell if overcoming it was a majestic effort or not. In the absence of concrete proof that she is in form and has the class to win a Grade 1, I think that TOINETTE is a pass, at least at the 5-1 morning line odds.

Number 6, ATHENA is another one that comes to us from the UK and Ireland and for some reason the Belmont Park track handicapper assigns relatively low morning line odds to her. It is surprising considering that her only win came after 7 tries at relatively low class levels… ATHENA did place last time out in a Group 1 race of the same distance as today but it was a field of 6 and she finished rather far from the winner. She ran that race 6 days ago across the pond so unless she is an amazing traveller, I think that it will be hard to win today…

Number 7, LA SIGNARE won last month on the Belmont Park Inner Turf track and was able to go wire to wire against some of today’s opponents. She went strongly for the lead from an outside post position and kept it all the way which is a strong move. That was a Grade 3 stakes and she held on strongly throughout. A good performance for this French Filly. A couple of sharp maintenance workouts hint that she might have kept her form but there is some speed on her inside to give her a bit of competition today and maybe park her out throughout. LA SIGNARE has a decent shot to repeat at the higher class level but she needs an easy lead and I am not sure she will get it.

Number 8, THEWAYIAM is a Grade 3 stakes winner in the spring but came up short at the Grade 2 level and failed last time out in an ungraded stakes too. She has two tepid workouts from the near miss which is not very encouraging considering the big class jump today. She has a come from behind style so the outside post position is a little less problematic than it would be for others but it is still not a plus… I think that THEWAYIAM is outclassed for the win.

Number 9, FATALBERE is also taking a step up after a rather dull performance at the lower class level last month, well behind PAVED, the winner. She is versatile and won in stakes both coming from way behind or staying closer to the action. Those stakes were of the ungraded or Grade 3 kind so that’s good, but probably not enough for today’s Grade 1… Starting from way outside on the Belmont Park Inside turf means that FATAL BERE is likely to exert a lot of energy trying to fit in a decent place and might be parked out all along. That will not improve her chances and I am passing on her today.

Number 10, MIGHTYSCARLET is taking a mighty big leap of class after only 4 races and a 3rd place in her only Graded 3 Stakes attempt. That race took place at this same track so there is some familiarity but she was starting from the inside at the time which is an advantage. She is a lightly raced filly so she might progress from the last start, but she is not drawing a lucky post position and there is better class on her inside to make MIGHTY SCARLET’s life difficult today.

LA SIGNARE won nicely at this same track last time out and the workouts seem to indicate that she is still in form so a repeat is not impossible even if she is taking a step up today. There is no proven Grade 1 winner in the field so she probably has the class she needs but she once again has to overcome a poor post position and go all the way at a longer distance. If the odds are good enough she is worth a win bet but I will have her in my exotics at least.

PAVED has a good shot as I believe that she will be well placed throughout and can pounce in the stretch. The morning line odds are juicy, and I would even accept less as I think that she has a very decent shot against this field.