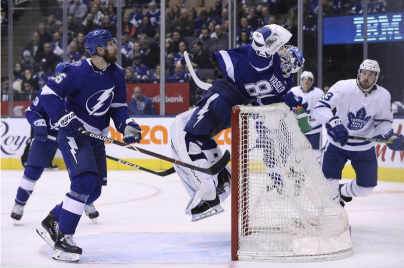 Just over 10 games are left for each team this season, which means playoff races are coming down to the wire. Here are some of the latest NHL stories happening around the league.

The Lightning set their franchise records for both wins and points following a 6-3 victory over the Capitals on Saturday. Tampa Bay’s record is 55-13-4, which passes the 54 wins and 113 points from last year with 10 games still to go. Alex Killorn recorded his first career hat trick, while Andrei Vasilevskiy made 30 saves to earn his 14th win in his last 17 starts. The Lighting need just five more wins to become the third team in NHL history to reach 60 wins, joining the 1995-96 Red Wings and 1976-77 Canadiens.

Mark Scheifele and Mathieu Perrault each scored as the Jets held off the Flames 2-1 in Winnipeg. Connor Hellebuyck made 27 saves, earning his 30th win of the season and keeping the Jets in first place in the Central Division. For the Flames, their three-game winning streak came to an end as well as their chance to clinch a playoff spot on Saturday night. However, they maintain a one-point lead over the Sharks for first place in the Pacific Division.

Speaking of the Sharks, they had a chance to move into first and clinch a playoff spot but fell at home to the Predators 4-2. Nashville’s Viktor Arvidsson scored twice, and Juuse Saros made 24 saves as the Predators stayed one point behind the Jets in the division. San Jose’s loss is their second in a row after they went on a six-game winning streak. Timo Meier and Joe Thornton scored for San Jose.

Bruins Back on Track

Brad Marchand scored with 1:30 remaining in overtime as the Bruins snapped their three-game losing streak and beat the Blue Jackets 2-1. Jaroslav Halak made 24 saves and only allowed the one goal, a far cry from the 15 goals allowed by Boston during the losing streak. But the win Saturday coupled with the Maple Leafs’ loss to the Senators extends Boston’s lead to four points for second place in the Atlantic Division.

Connor McDavid scored twice, including the overtime winner, as the Oilers edged the Coyotes 3-2. Alex Galchenyuk scored two goals for Arizona, who lost for just the third time in the last 13 games. Arizona still leads the Wild by two points for the final Wild Card spot in the Western Conference, and trail the Stars by one point for the next spot. Edmonton is not out of the race either, trailing the Coyotes by six points after going 8-3-1 in their last 12 games.

Corey Crawford made 48 saves as the Blackhawks shut out the Canadiens 2-0 in their fifth straight win. It was Crawford’s 25th career shutout and his second of the season. Connor Murphy and Brendan Perlini scored, while Alex DeBrincat dished out two assists. Chicago is climbing up the standings, now sitting just five points behind Arizona for the second Wild Card.

No More Funk For Blues

Jordan Bennington made 40 saves as the Blues snapped their three-game losing streak and beat the Penguins 5-1 in Pittsburgh. Vince Dunn had two goals and Patrick Maroon added a goal and an assist, leading a Blues team who only scored three total goals in the previous three games. St. Louis is still holding on to third place in the Central Division, two points ahead of the Stars and six points behind the Predators.

Tonight’s NBA betting schedule is lacking in overly compelling matchups, but tonight’s action will also be taking place with a few notable names missing. Booker, Morant, and Lillard Sidelined Tonight and Beyond Booker Out Versus Pistons Due to Hamstring Injury The Phoenix Suns lost Devin Booker (hamstring) on Tuesday against Golden State but closed out END_OF_DOCUMENT_TOKEN_TO_BE_REPLACED