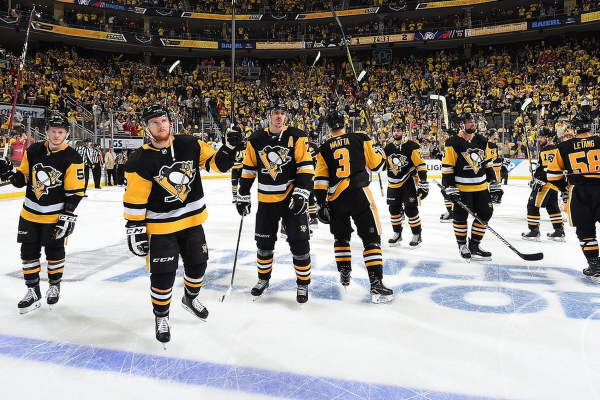 It’s always a treat when these two teams get together for another addition to their great rivalry. Tuesday night, the defending champion WashingtonCapitals (41-21-7, 1st Metropolitan) visit thePittsburgh Penguins (37-23-9, 4th Metropolitan).

The Capitals come into this game red-hot, riding a seven-game winning streak and nine wins in their last 10 games. The Penguins are also playing well, going 6-2-2 over their last 10 and four wins in their last five games. This is already meeting number four between these clubs this season, with Pittsburgh winning two of the three, including the most-recent game back on December 19th.

The Penguins are favored to come out on top tonight at home. Currently, Pittsburgh is listed at -130.

Despite a sluggish 8-7-3 start to the season, the Capitals found their footing and have surged up the standings. Since their season-worst seven-game losing streak in January, Washington has gone 14-4-1, and now find themselves narrowly ahead of the Islanders for first place in the division.

Washington is once again a strong offensive team with a good power play. They are currently seventh in goals and second in shooting percentage, as well as top-10 in power play percentage. Defense is a little average, were they are only 19th in goals allowed and 21st in penalty kill.

It’s no surprise that perennial All-Star and captain AlexOvechkin leads this group with 46 goals and 77 points. Nicklas Backstrom is next up with 65 points, coming into tonight with a three-game goal streak. Defenseman John Carlson is also one of the top offensive d-men around, chipping in 50 assists and 10 goals.

Braden Holtby is projected to start once again. Holtby carries a record of 26-16-4, with a 2.88 goals against average and .910 save percentage.

Down to the Wire

The Penguins are a team who has looked brilliant at times and mediocre at others. Following their season-high eight game winning streak in December, Pittsburgh has gone just 14-11-3. At 83 points, they’re four ahead of both Columbus and Montreal for the first Wild Spot spot in the Eastern Conference.

Based on some of the season-long statistics, the Penguins should be near the top of the league. They are currently fifth in goals, ninth in shots, seventh in shooting percentage, and sixth in power play percentage. They even find themselves a little ahead of Washington defensively, ranking 16th in goals allowed and 15th in penalty kill).

In classic Caps–Penguins form, both captains lead the team in scoring. Sidney Crosby has a team-high 88 points, including two goals and three assists over his last four games. Evgeni Malkin and Phil Kessel each have 68, with leading-goal scorer Jake Guentzel (3 goals, 2 assists in last four games) is not far behind with 65 total points (34 goals).

Matt Murray is the projected starter for Pittsburgh tonight. Murray is 23-11-3 with a 2.77 GAA and .917 save percentage, to go along with four shutouts.

Despite momentum slightly favoring the Capitals, the Penguins are trying to fend off teams beneath them to stay in postseason contention. In addition, you could make the argument that the Penguins are an overall better team, who also have a great track record against the Caps. They will come in motivated, and ultimately it will result in a win for the Penguins -130.