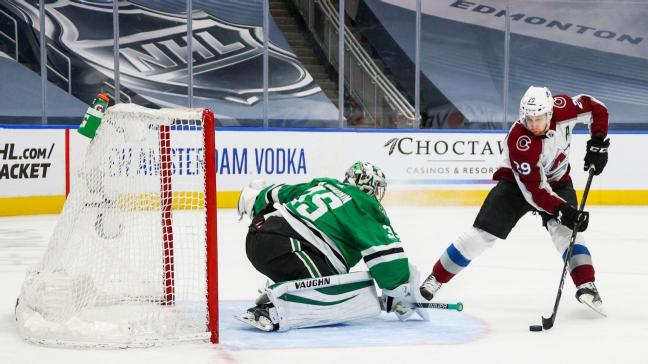 The Colorado Avalanche and Dallas Stars come together for Game 6 of the Western Conference Semifinals on Wednesday at 8:00 PM ET. Although the game will be played in Edmonton, Alberta as part of the NHL’s bubble system, Dallas will have the advantage of final change as the home team.

The Stars hold a 3-2 series lead coming into the contest, and a victory would send them to the Western Conference Final to play the winner of the Vancouver Canucks vs. Vegas Golden Knights series. Meanwhile, the Avalanche are looking to force a decisive Game 7.

Dallas enters the game as slight underdogs at +105 on the money line while Colorado is at -130. The over/under on goals is set at 6.5, even though every game in the series has had at least seven goals scored.

Colorado staved off elimination with a convincing Game 5 win where they scored five goals in the first period en-route to a 6-3 victory. The Avalanche are looking to repeat that result in order to keep their season alive for at least another two days.

Meanwhile, Dallas is looking to move on to the conference final for the first time since 2008. They came one goal away from doing so last season, but lost in overtime of Game 7 against the St. Louis Blues.

Every game in this series has been a high-scoring affair. The two teams have combined for 43 goals in five matchups—an average of over eight tallies per game.

The Avalanche ranked fourth in the entire NHL last season in goals scored and have kept that trend going this summer, largely on the back of Nathan MacKinnon, who has points in every playoff game so far.

And Dallas, a team that struggled to score in the regular season, has found a spark in their offense up and down the lineup. Joe Pavelski and Denis Gurianov lead the team with 8 goals this postseason, while young defenseman Miro Heiskanen holds the lead in points with 18.

Goaltending has been a wild ride for both clubs over the last five games. In fact, five different netminders have started in this series: Anton Khudobin and Ben Bishop for Dallas and Philipp Grubauer, Pavel Francouz, and Michael Hutchinson for Colorado.

Both Grubauer and Bishop have suffered injuries in these playoffs, although Bishop was healthy enough to start Game 5 for the Stars.

The big key to Game 6 is going to be in net. The winning team in every game so far has scored at least five goals, meaning goaltending has not been as good as it could be for both sides. If either Colorado or Dallas gets a hot goaltender, that should be enough to decide the game and, potentially, the series.

It is unconfirmed which two netminders are going to get the start, although initial predictions have Bishop and Hutchinson in goal. Choosing Bishop over Khudobin would be an interesting choice for Dallas, especially after Bishop gave up four goals on 19 shots in the first period of Game 5, but he does have 52 playoff games on his resume compared to Khudobin’s 14. In those 52 games, Bishop has recorded a .924 save percentage and a 29-21 record.

Another critical point to the game is Colorado’s depth.

MacKinnon has been nothing short of spectacular in these playoffs, earning 23 points in 13 games so far. But the Avalanche need scoring from their bottom six forwards in order to make a successful comeback. If a player like Matt Nieto or Tyson Jost can get on the board in Game 6, then Colorado has a decent chance at forcing another game.

I’m taking the Dallas Stars on this one.

The Stars are coming off of a miserable defeat two days ago, so look for them to get going quickly and maintain pressure throughout the contest. I can also see either Bishop or Khudobin being virtually unbeatable for a game, as both have shown flashes of brilliance over the years. The same can’t be said for Colorado’s goaltending tandem, which consists of two backup goaltenders with fewer than 10 playoff games between them.

Couple all of this together with Dallas receiving the last change and getting their top defensive pair out against MacKinnon’s line and you have a winning situation.

Colorado may be playing for their season, but Dallas is equipped to withstand their opponent’s desperation.