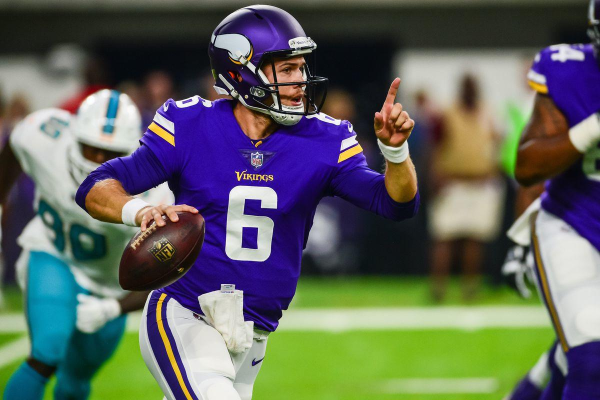 NFC North rivals collide in a week 17 matchup with plenty on the line for both teams. The Minnesota Vikings hope to win and sneak into the NFC Playoffs, while the Chicago Bears are trying to secure a first-round bye. The Bears were able to beat the Vikings earlier this season, winning by a score of 25-20 at Soldier Field in Chicago. Expect some big hitting in this game, as both defenses are dominant.

The Vikings have won two straight games to keep their postseason hopes alive. Minnesota brings an 8-6-1 record into this season finale, and a victory would clinch a Wild Card berth in the playoffs. The Chicago Bears were able to wrap up the NFC North Division and could earn a first-round bye with a victory and a loss by the Los Angeles Rams. Chicago is 11-4 on the season, and are guaranteed at least the third seed in the NFC. Minnesota is -5.5 over the Bears on Sunday.

The Chicago Bears feature one of the most ferocious defenses in the entire NFL, and they are also great at forcing turnovers. The Bears are allowing just 18.2 points per game this season, and have recorded 46 sacks. Linebacker Khalil Mack has led the charge on defense, racking up 12.5 sacks and forcing six fumbles. Chicago has scored six defensive touchdowns already this season, and they present a problem to a struggling Vikings offense.

Second-year quarterback Mitchell Trubisky has made huge strides under head coach Matt Nagy. Trubisky has thrown for over 3,000 yards this season and has shown the ability to keep drives alive with his feet. Look for the Bears to try to get running backs Tarik Cohen and Jordan Howard going early in this game. The duo has combined for over 1,200 yards and nine rushing touchdowns this season. If the Bears take care of the ball on offense, they will be tough to beat this season.

Cousins Must Prove His Worth

There will be a ton of pressure on Vikings quarterback Kirk Cousins in this game. Cousins was brought in during the offseason to improve the Minnesota offense, and he must deliver in this must-win game. Cousins has thrown for over 4,000 yards while completing 70 percent of his passes this season, but he struggled in the first matchup against the Bears. Wide receiver Adam Thielen has loved having Cousins around, catching 110 passes for 1,335 yards this season. The Vikings will need to find a way to score against a dominant Bears defense.

The Vikings defense is starting to return to form from a season ago. Minnesota is allowing just over 21 points per game this season, but their defensive line is one of the best in the league. Defensive end Danielle Hunter has 14.5 sacks this season, and the Vikings have 50 total sacks on the season. Most of the pressure falls on the Vikings offense, but Minnesota needs to get stops on defense in this game as well. Look for Minnesota to try to get pressure on Trubisky in this game in hopes of forcing the young QB to make some mistakes with the ball.

Bears coach Matt Nagy plans to play his starters in this game, but there will definitely be some starters sitting out. Chicago is a longshot to slide into the number two seed, and they won’t press the issue if things go wrong early. The Vikings know that their season is over with a loss, and you can expect them to be ready for this game. Minnesota is just too good to miss the playoffs, and they will beat the Bears by double digits on Sunday. Bet the Vikings -5.5 over the Chicago Bears.