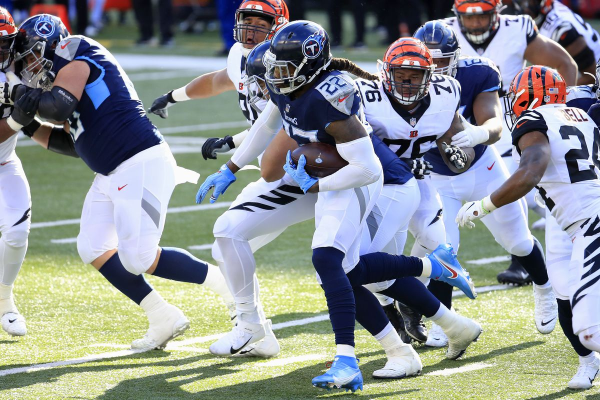 The Tennessee Titans travel to Chicago to face the Bears in a Week 9 matchup. Both teams are struggling, coming off a two-game losing streak. Not to mention, both teams are facing injury and COVID-19 related issues.

This is a must-win game for both teams. Chicago is looking to keep up with the Packers, who showed well in their Thursday night matchup against a depleted 49er’s team. Tennessee is also trying to keep pace with a surprising Colts team who face the Ravens this week. If Tennessee can hold off the Bears, they likely hold the key to the AFC South.

According to DraftKings, the Titans are a 6.5 point favorite. This is a large spread given they are on the road facing a team that’s five wins to only three losses. The Bears have played above average since their switch to Nick Foles at quarterback, but injuries have decimated the team as of late.

The Bears are an enigma at this point. They have overachieved, but injuries make them a shell of a team they once were during their 5 and 3 starts. They have a stout defense which ranks eighth in the league in points allowed a meager 18th against the run, which bodes well for a run-heavy team like the Titans. Currently, they rank 3rd in rushing offense behind Derrick Henry’s legs.

Against the spread, the Titans are 2-5, despite their 5-2 record straight up. Titans are also on a two-game ATS losing streak and have covered the over in their last six games. However, the Bears have covered the under in four of the last five games, making this tricky.

The Bears are in dire straits. Almost the entire offensive line is being run on second and third-string players. For a team like the Titans, who rank low in the league in sacks, this may help them get to Foles more often than usual.

Starting right tackle, Bobbie Massie injured his knee Tuesday and placed on injured reserve. His replacement, Jason Spriggs, is on the COVID-19 reserve list after testing positive and remains in quarantine.

Chicago’s right side of the line also took a hit when they lost starter Germain Ifedi at guard after being placed on the COVID-19 reserve list for being a high-risk close contact.

To make matters worse, Chicago will be without center Cody Whitehair and his backup Sam Mustipher, who came up lame in practice this week with a bum knee.

The Bears are already without starting left guard James Daniels, who is out for the season when he tore his pectoral muscle in week 5.

Tennessee has fared a little better. After postponing a game early in the season because of many players and staff being quarantined, they are finally healthy and almost at full strength.

Jadeveon Clowney is the biggest question mark for Sunday’s game. Tennessee placed him on the did not practice report Wednesday with a knee injury and is questionable to play.

Wide receiver Adam Humphries and punter Brett Kern are the only Titans players listed as out. Not a big deal, considering Humphries is not a crucial part of the offense. Punters are a dime a dozen and easy to replace.

Pick the Titans to Cover

Even though the Titans are on a two-game skid and just 2-5 ATS this year, they are a much better team that matches up well against a porous run defense. Look for Tennessee to shove the ball down Chicago’s mouth and see Derrick Henry pile up big numbers.

Chicago has an uncanny way of finding ways to score, but can they overcome a depleted O-Line? My answer is a big NO!

I wouldn’t bother with a money line bet since the payout isn’t worth it. The Titans will cover, and my guess is by a lot more than 6.5.

This is where we get contradictory. Yes, the Bears have gone under in 4 of 5. And the Titans have gone over in 5 straight. All signs point to a low-scoring game, with Tennessee doing most of the damage. You can’t win with 3rd string players. That’s the challenge Chicago faces right now. Foles will be running for his life all game and be lucky to put up 10.

I like the under here and predict a 26–10 Titans blow out.

Henry Rushes for over 95 Yards

Here’s a prop bet I love!

DraftKings has Henry at 94.5 yards. When you take a below-average rush defense and pit them up against the league’s best running back, chances are most of the yards put up will be on the ground. And if the Titans take a big lead early, you can bet Henry will see a lot of touches on a conservative offense.