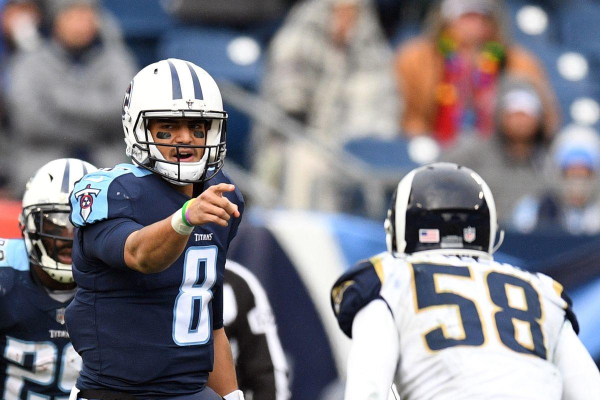 Thursday Night Football will see a matchup of two AFC South teams as the Jacksonville Jaguars (4-8) will travel to Nissan Stadium to take on the Tennessee Titans (6-6). For the Jaguars, this has been a horrifically disappointing season. After such an amazing season last year, one that saw them go 10-6 and finish one game shy of the Super Bowl, they have been dreadful this year. While their defense has been steady, their offense has ranked towards the bottom of every category and has seen starter Blake Bortles benched. For the Titans, they are still clinging hope to a wildcard spot, meaning every game is pivotal for them and got a huge win last week when they beat the Jets 26-22. The Jaguars and Titans will battle it out with a scheduled 8:20 pm ET kickoff.

The point spread comes in with the Tennessee Titans 4-point favorites at home. The over/under on total points scored is set at 37.5 points.

While the defenses have been solid, both offenses have left a lot to be desired. The Jaguars rank 24th in total yards at 335.2 per game and the Titans come in at 28th with 310.2 yards per game. As bad as the yardage is, the scoring is worse. The Titans rank 28th in the league, scoring an average of 18.4 points while the Jaguars come in 30th, scoring 16.9 points per game.

There weren’t too many people who expected the Jaguars to have a chance when they hosted the Indianapolis Colts. The Jaguar’s defense, though, was dominant and held the Colts scoreless. While their offense only managed a couple of field goals, it was still good enough for a 6-0 victory. Leading the way under center in this one was Cody Kessler. After Bortles was benched the week before, Kessler went 18 for 24 in this one, throwing for 150 yards. While he didn’t have a touchdown, he also didn’t have a turnover, something that has plagued the Jaguars this year.

When he does throw, the leading receivers for the Jaguars this season have been T.J. Yeldon (53 catches, 472 yards, 4 touchdowns), Dede Westbrook (46 catches, 553 yards, 4 touchdowns), and Donte Moncrief (37 catches, 557 yards, 3 touchdowns). On the ground, the Jaguars go-to running back has been Leonard Fournette. The problem is that he hasn’t always been available. After dealing with an injury earlier in the season, he was suspended last week after a fight broke out the week before. Still, Fournette will suit up for this one and will be the featured back. On the season, he has 314 yards and 4 touchdowns on 90 carries. Also getting reps will be Carlos Hyde (511 yards, 5 touchdowns) and T.J. Yeldon (401 yards, 1 touchdown).

While the Titans likely won’t catch the Texans for the division lead, they could conceivably claim a wildcard spot. To do so, the Titans will turn to Marcus Mariota and company to deliver these next several weeks. On the season, Mariota has thrown for 2,168 yards, but only 11 touchdowns versus 7 interceptions. He has also been sacked a whopping 38 times. This season, Mariota’s leading receivers have been Corey Davis (52 catches, 744 yards, 4 touchdowns) and Dion Lewis (45 catches, 309 yards, 1 touchdown).

Speaking of Lewis, he is one half of the backfield for the Titans. On the ground, he has rushed for 464 yards and 1 touchdown. The other half, Derrick Henry, has rushed for 474 yards and 5 touchdowns. To his credit, Marcus Mariota has also had some success rushing, going for 326 yards and 2 scores.
Defensively, the stat leaders for the Titan’s defense are Adoree’ Jackson (51 tackles and 2 interceptions), Jayon Brown (6 sacks) and both Malcolm Butler and Kevin Byard (who also have 2 interceptions).

Defense Will Win This Game

When it comes to the offenses, both of these teams are pretty darn bad. As a result, I think it is going to come down to field goals and possibly even a defensive score. Jacksonville really looked like the dominant defense of old last week against a formidable Indianapolis Colts team, but the question remains, can they score? Still, because I see this one going under the 37.5 points, I am going to take the Jaguars and the 4 points. Again, this one might be decided by a field goal, so I will take the team who is getting spotted points.