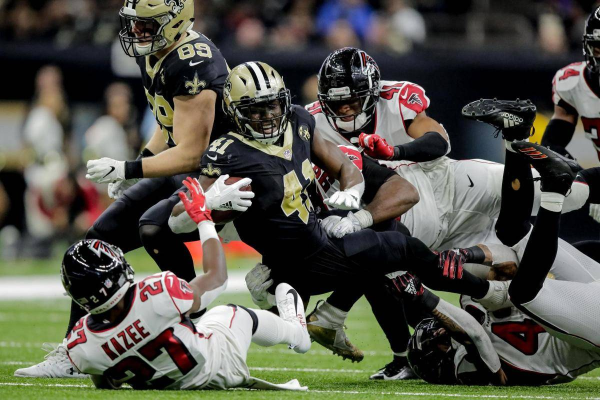 Since the beginning of week 2 of the NFL season, the New Orleans Saints have been the best team in football. After a 48-40 loss to the Tampa Bay Buccaneers in the first week of the season, the Saints have won 10 straight games, including a 31-17 win over the Atlanta Falcons last week. Along the way, they have been beating teams by an average of 16.1 points, and the scary thing about them is that as good as their offense has been, their defense has not played too bad either.

On Thursday night, the Saints (10-1) will be traveling to AT&T Stadium to take on the Dallas Cowboys (6-5). For the Cowboys, after a slow start to the season, they have turned it around a bit as of late having won 3 games in a row including a 31-23 win over the Redskins last week. The two will square off Thursday with kickoff scheduled for 8:20 pm ET.

The point spread comes in with the New Orleans Saints being 7.5-point favorites on the road. The over/under on total points scored is set at 53 points.

Both of these teams have pretty good defenses, with both ranking in the top half of the league. For the Cowboys, they rank 7th in total yards allowed allowing opponents an average of 331.1 yards per game. For the Saints, they come in at 15th, allowing 358.9. In terms of average points allowed, the Cowboys rank 3rd with 19.4 points while the Saints remain at 15th allowing 23.3.

Offense is a whole different story, though. The Saints offense has been electric, gaining an average of 416.6 yards per game (good for 5th in the NFL) while being the top-ranked scoring offense at 37.2 points per game. For the Cowboys, this is where they have struggled. They rank 23rd in points scored per game (21.3) while ranking 25th in yards per game (334).

While the division may be well in hand, the Saints would love nothing more than to keep their hot streak going as the playoffs approach. Quarterback Drew Brees has led their highflying offense. The future hall of famer has thrown for 3,135 yards with 29 touchdowns versus only 2 interceptions. Also amazing is how well the offensive line has played given that he has only been sacked 10 times this season. His biggest weapons on the receiving end have been Michael Thomas and Alvin Kamara. Thomas has gone for 1,080 yards and 8 touchdowns on 86 receptions while Kamara has gone for 519 yards and 4 touchdowns on 57 receptions.

Cowboys Looking For Four In A Row

It has been amazing what a single wide receiver has done to the offense. While the Cowboys were blasted for giving up a first round pick for wide receiver Amari Cooper, the early returns have been good. For the entire season, including his time with the Raiders, Cooper has gone for 629 yards and 4 touchdowns. He has certainly given Dak Prescott a legitimate number one after the departure of Dez Bryant in the offseason. Speaking of Prescott, he has gone for 2,427 yards, 13 touchdowns and 5 interceptions this year. The biggest concern, though, are the sacks. He has been sacked a whopping 38 times this year. Prescott has also rushed for 279 yards and 5 touchdowns.

The leading rusher for the Cowboys is Ezekiel Elliott. On the season, he has rushed for 1,074 yards and 6 touchdowns on 217 carries. He has also gone for 363 receiving yards and 2 touchdowns through the air.

The defensive leaders for the Cowboys are Leighton Vander Esch (71 tackles and 2 interceptions), Demarcus Lawrence (8.5 sacks) and Xavier Woods, who has also had 2 interceptions.

Until the Saints show that they can be slowed down, I just can’t bet against them at this point. Even against a decent Dallas defense, I think the Saints are going to put up points in a hurry. They just have too many ways to beat you and I don’t think the Cowboys offense will be able to keep up. 7.5 points is a lot to spot any team in the NFL, but for my money, that is exactly what I would do. Take the Saints at -7.5.