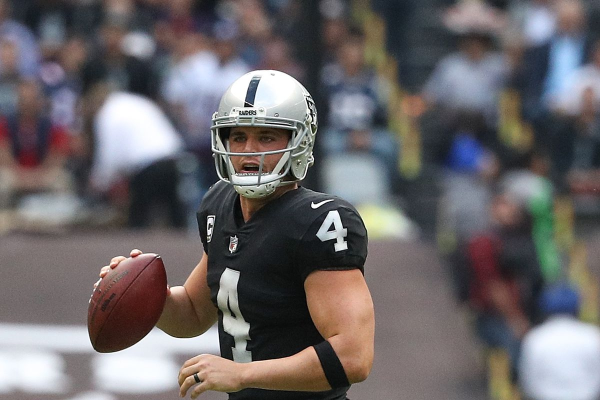 On Thursday night, one team is going to double their win total.  In a battle of California teams, the Oakland Raiders (1-6) will be squaring off with the San Francisco 49ers (1-7).  With a combined record of 2-13, this is far from a stellar matchup, but with both teams being equally as bad, it may make for a pretty interesting game.

For the Raiders, their lone win came in week 4, when they beat the Cleveland Browns in overtime 45-42. Since that time, they have lost 3 in a row, including a 42-28 loss to the Colts last week.  For the 49ers, their one win came against the Lions all the way back in week 2. Since then, they have lost 6 straight, including an 18-15 loss against the Cardinals last week. The two teams will both be looking for their second win when the Raiders travel to Levi’s Stadium to take on the 49ers Thursday night.  Kickoff is scheduled for 8:20 pm ET.

The point spread comes in with the San Francisco 49ers as 2.5-point favorites at home.  The over/under on total points scored is 45.5.

Gruden Looking For Something Positive

Since signing a 10 year, $100 million dollar contract, coach Jon Gruden hasn’t had a whole lot to celebrate.  He has traded away two of his best players in Khalil Mack and Amari Cooper, although the Cooper deal may end up being a steal for them since they netted a first round pick for the inconsistent wide out.  Still, following those trades, the team has started 1-6 and has not looked like even a one win team throughout the year.

Offensively, they rank 27th in points per game at 19.7.  Under center is quarterback Derek Carr.  This season he is 188 for 261 with 2,027 yards passing. He also has 10 touchdowns, 8 interceptions and has been sacked 17 times.  Currently, his best receivers have been Jalen Richard (39 receptions, 303 yards) and Jared Cook (36 receptions, 474 yards, 3 touchdowns).  On the ground, with Marshawn Lynch out for the significant future, they have turned to Doug Martin. On the season, Martin has 171 yards rushing on 40 attempts.

Defensively, they rank 31st in points allowed per game (31.1).  Their leading defensive players include Tahir Whitehead (36 tackles), Bruce Irvin (3 sacks) and a few others, including Daryl Worley and Reggie Nelson with 1 interception.

49ers Looking For A Home Win

With just one win on the season, a 30-27 win over the Detroit Lions in week 2, the 49ers could use another one.  Unfortunately, the 49ers have been decimated with injuries this season. Their starting quarterback (Jimmy Garoppolo) is out for the year, and they have struggled to keep running backs, most notably Matt Breida, consistently healthy.

Taking over for Garoppolo has been CJ Beathard.  On the season, Beathard is 102 for 169 with 1,252 yards passing, 8 touchdowns and 7 interceptions.  He has also been sacked 18 times already. Knowing that Garoppolo had been sacked 13 times, the 31 total sacks just shows how much the 49ers line has struggled.

For Beathard, his leading receivers have been George Kittle (37 catches, 584 yards, and 2 touchdowns) as well as Pierre Garcon (21 catches for 230 yards). On the ground, when healthy, Matt Breida has led the way.  He has 487 yards and 2 touchdowns on 84 attempts.

Defensively, the 49ers rank 17th in total yards given up at 365.4 yards per game.  They rank 28th in points per game given up, though, at 29.5 points.  Throw in a meandering offense and it is no wonder why they have only won a single game.  Their defensive leaders are Fred Warner (49 tackles), DeForest Buckner (4.5 sacks) and Jaquiski Tartt and Antone Exum with an interception each.

This game is probably going to be pretty ugly.  Both sides are not exceptionally great at any one facet of the game.  As a result, I have to lean towards two things in my decision. First, the 49ers are playing at home and, as crazy as it may seem, they are probably the more cohesive unit at this point.  The Raiders just seem to be a mess. It is very evident that they are hardcore rebuilding (just look at the glut of first round picks they have next season) and spirits can’t be too high after seeing some of your best players leave over the course of the first half of the season.  As a result, for my money, I think I would roll with the 49ers at -2.5.