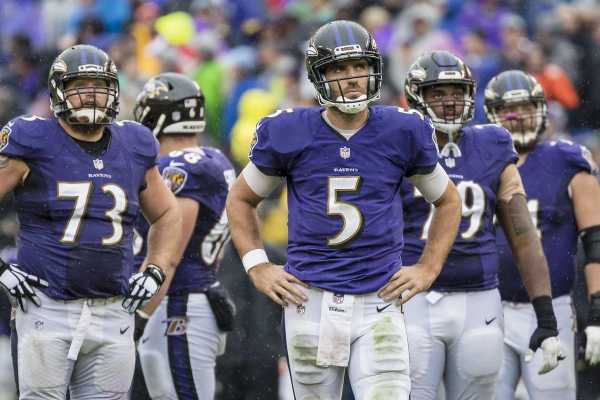 Things are really starting to heat up in the NFL, as games are becoming more and more important for teams chasing playoff spots. Perhaps that’s why nine*** of the 13 games this weekend were decided by four points or less. Let’s catch up on everything that mattered from Week 11.

Unfortunately, one of the highlights of the weekend was the gruesome injury suffered by Washington quarterback Alex Smith. He broke both the fibula and tibia in his right leg and will miss the rest of the season. Colt McCoy will take over as Washington’s starter, although the Redskins will work out several currently unemployed quarterbacks in search of a backup. The Redskins also have a quick turnaround, as they face the Cowboys on Thursday with Dallas just one game behind them in the NFC East.

On a more positive note, Lamar Jackson had an outstanding first career start in place of the injured Joe Flacco. Jackson led the Ravens to a 24-21 win over the Bengals, setting a Super Bowl era record for most carries by a quarterback with 27. He ran for 117 yards, the second-most by a rookie quarterback in a game, behind only current teammates Robert Griffin III. Jackson also completed 13 of 19 passes for 150 yards, which isn’t bad for someone who was sent to the hospital on Thursday because of stomach problems.

Outside of Smith, a few other teams suffered significant losses this past week. Green Bay tight end Jimmy Graham broke his thumb on Thursday. The injury could keep him sidelined for most or all of the regular season with just six weeks left to play. Meanwhile, the Chargers lost defensive tackle Corey Liuget, who will miss the rest of the season because of a torn quad tendon. Liuget went down one week after the Chargers also lost linebacker Denzel Perryman to a season-ending injury. In Dallas, tight end Geoff Swaim will be out indefinitely due to a wrist injury that will require surgery. The Cowboys are hopeful he’ll return before the end of the regular season, although expectations should be tepid at best.

McCoy stepping in for the injured Smith highlights the quarterback news for the week, but there are plenty of other quarterback headlines to know about heading into Week 12:

The Buccaneers have made another quarterback change, as they’re going back to Jameis Winston, with Ryan Fitzpatrick going back to the bench. Fitzpatrick threw three interceptions in Sunday’s loss to the Giants before being benched in favor of Winston, who has also struggled to avoid turnovers this year.

Mitchell Trubisky is reportedly battling an injury to his throwing shoulder. Had the Bears practiced on Monday, he would not have participated. At the moment, it doesn’t appear serious. However, the Bears have a quick turnaround, as they play on Thursday against the Lions.

Ryan Tannehill is getting closer to returning to the Dolphins, as he’s expected to practice on Tuesday. Tannehill has missed the last five games but was able to amp up his rehab during Miami’s bye. If he can make it through a full week of practice, he may get the start over backup Brock Osweiler this week.

Buffalo’s Josh Allen may also be close to returning. He’s not been fully cleared, but Allen says he feels comfortable throwing the ball, which could allow him to play this week against the Jaguars.
Sam Darnold, meanwhile, may not yet be ready to return to action. He’s out of the walking boot he was wearing prior to his team’s bye last week. However, Todd Bowles called his status “week-to-week.” If Darnold isn’t ready by Sunday, Josh McCown will start against the Patriots.

The Jacksonville Jaguars were supposed to be legit this year, one year after nearly beating the Patriots in the AFC Championship Game. However, the Jags have now lost six games in a row after losing to the Steelers on Sunday despite having a 16-0 lead late in the 3rd quarter. According to ESPN’s win probability, the Jaguars had a 97.7% chance of winning late in the 4th quarter before the Steelers scored two touchdowns in the final two and a half minutes. Needless to say, it was a new low for what has been a disastrous season for the Jaguars.

In one of the oddest stories in recent memory, the Cleveland Browns are reportedly interested in interviewing Condoleezza Rice for their head coaching vacancy. Rice, of course, is best known as being the former Secretary of State. She is also a lifetime Browns fan and was on the College Football Playoff committee from 2013 to 2016. In a Facebook post, Rice said she wasn’t ready to be a coach. However, interviewing her for the job could lead to Rice joining the organization in some capacity.