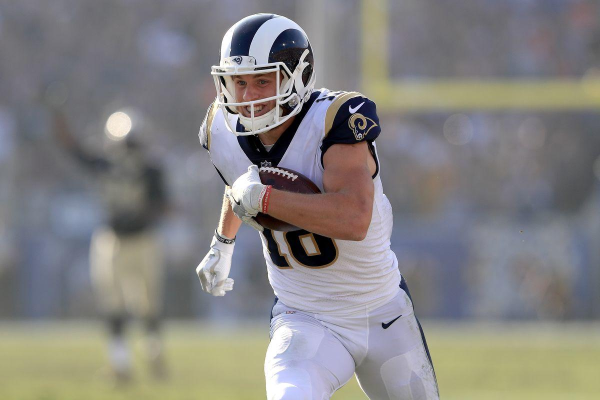 Another week of NFL action is in the books and we are officially moving into the second half of the season with every team playing at least nine games. Let’s try to wrap up Week 10 and look ahead to Week 11.

Over Before It Started

The Saints thought they were signing Dez Bryant to help during the stretch run. But before he could appear in his first game, Bryant tore his Achilles in practice, ruling him out for the rest of the season. He will now sit out the entire 2018 season and has a lot of work ahead of him in order to be ready for the 2019 season. Of course, the Saints have been fine on offense without him this season and are coming off a 51-point performance on Sunday, so Bryant getting hurt isn’t a massive loss for them. In fact, they have already signed veteran Brandon Marshall to help replace him.

Despite beating the Seahawks 36-31 on Sunday, the Rams suffered a significant loss with Cooper Kupp being ruled out for the rest of the season due to a torn ACL. Kupp was third in receiving behind Brandin Cooks and Robert Woods but led the team with six receiving touchdowns. Needless to say, it’s a massive blow for the Rams, who were quite potent with Todd Gurley in the backfield and three quality receivers catching passes from Jared Goff. Josh Reynolds figures to be the next man up on the depth chart to step up and take on a larger role.

Speaking of the 51 points the Saints scored on Sunday, it appears to have cost Cincinnati defensive coordinator Teryl Austin his job. The Bengals fired Austin on Monday, just nine games into his first season with the team. After the 51 points they gave up on Sunday, the Bengals are 31st in the NFL in points allowed with 32 per game and at or near the bottom in almost every major defensive statistic. Upon giving up 130 points in their last three games, it was only getting worse, prompting a change for the 5-4 Bengals.

Two coaches are undoubtedly on the hot seat coming out of Week 10: Todd Bowles of the Jets and Dirk Koetter of the Buccaneers. The Jets were embarrassing in a 41-10 home loss to the lowly Bills, who started Matt Barkley, their fourth different quarterback of the season. The Jets have now lost four straight and will have to sit with that losing streak for two full weeks before they return from their bye against the Patriots. It’s a bleak picture, although the Jets say that Bowles won’t be fired midseason.

Koetter is also in deep trouble with the Bucs losing six of their last seven. The typically potent Tampa Bay offense was held to just three points on Sunday. With his job potentially on the line based on how the team plays the rest of the season, Koetter has decided to stick with Ryan Fitzpatrick as the team’s starting quarterback. However, kicker Chandler Catanzaro has been released after missing two field goals on Sunday.

Owners can’t really be on the hot seat, but if they could, Mark Davis of the Raiders would be on it. To his credit, Davis stood up this weekend and took the blame for Oakland going 1-8 to this point in the season. He said the “reconstruction” of the roster that started in 2014 has failed and is the reason why the Raiders aren’t competitive right now. However, Davis says that Jon Gruden, who signed a 10-year deal to return as the team’s coach earlier this year, is “going nowhere.”

There were a couple of notable cuts in the aftermath of Week 10. First, the Bills finally letting go of quarterback Nathan Peterman is a long overdue move. As mentioned, Matt Barkley played well during Sunday’s win against the Jets. The move also signals that either Josh Allen or Derek Anderson will be ready to return following this week’s bye.

Elsewhere, the Panthers cut running back C.J. Anderson. The Panthers have leaned heavily on Christian McCaffrey this season, leaving just 24 carries all year for Anderson. Given his track record, it wouldn’t be a shock to see Anderson catch on with another team before the end of the season.