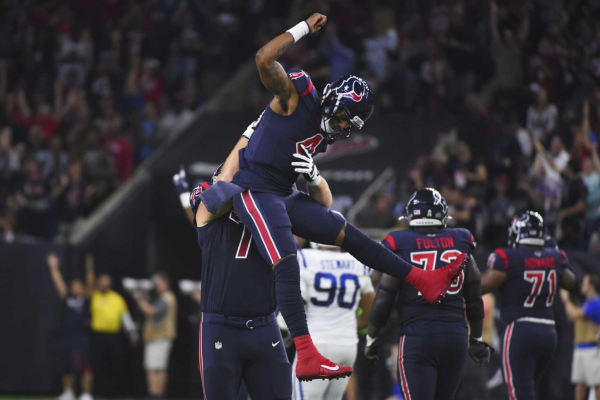 There’s very little consensus regarding the discussion of who the best receiver in the NFL is. In leading the Texans to a massive Thursday Night Football victory over the division-rival Colts, DeAndre Hopkins made his claim to the throne.

Both Houston and Indianapolis entered the contest with records of 6-4 and in a tie for the AFC South lead. The winner would gain control of the division with a clear path to playoff football. The loser would fall into seventh and out of a postseason position.

It was a tightly contested game throughout, eventually swaying towards the Colts when running back Jonathan Williams bounced off a defender and scampered for a 13-yard touchdown to put Indy up 17-10 midway through the third quarter.

The Texans would add a field goal in the third, but took a four-point deficit into the fourth. With the only score of the final period, Deshaun Watson hit Hopkins for his second touchdown of the night on a 30-yard strike, giving Houston a 20-17 lead it would never relinquish.

Watson finished the game with 298 yards, two touchdowns, and one interception. While Will Fuller V racked up 140 receiving yards, it was Hopkins who caught six balls for 94 yards and two touchdowns.

The victory pushed the Texans to a record of 7-4 and handed them control of the AFC South.

Houston’s Biggest Game Of The Season

Coming off a 41-7 throttling at the hands of Baltimore, Houston entered what could easily be considered its biggest game of the season.

To put it simply, a defeat on Thursday night would have crippled the Texans’ playoff hopes.

With the Wild Card race turning against it, Houston would have been desperate to win the division, but a loss on Thursday night would have given the Colts the outright lead on overall record, a perfect 4-0 division record, and two wins over Houston. All of that would mean Indianapolis would have held most significant tie-breakers over the Texans.

Plus, all of the above would have been exacerbated by the fact that Houston’s next game is against New England, which currently leads the AFC with a record of 9-1.

So, Thursday Night Football against the Colts was the Texans’ biggest game of the season not only because it handed them the lead in the AFC South, but also because it avoided all of the above.

Now, 7-4 Houston controls its division, split the series with Indianapolis while matching its 3-1 division record, and put itself just behind Buffalo in the AFC standings.

Are Texans a Postseason Lock?

Five games remain for the Houston Texans, starting with a daunting Sunday Night Football matchup against the Patriots on Dec. 1. After that, Watson and company will take on the Broncos, Titans, Bucs, and Titans again.

An upset win over New England would surely mean playoff football for the Texans. Otherwise, Houston may very well need to win each of their last four contests to stay ahead of Indianapolis, which is likely to be favored in every remaining game apart from its showdown with New Orleans.

According to the odds, Houston holds a strong advantage in the AFC South. After winning their biggest game of the season thus far, the Texans are favorites to win the division with odds of -200.

A massive win over Indy put Houston in the AFC South driver’s seat. Now it’s up to the Texans to finish the race.