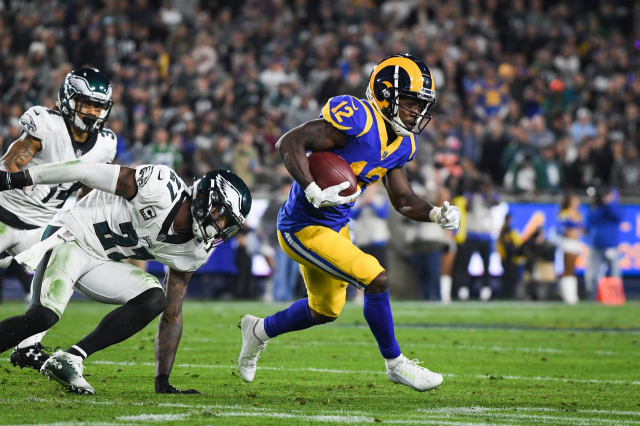 At the age of 26, wide receiver Brandin Cooks is now set to play for his fourth team in seven seasons after being traded for the third time in his career.

On Thursday, the Los Angeles Rams agreed to trade Cooks and a 2022 fourth-round pick to the Texans in exchange for a second-round pick in the upcoming draft. The newly-acquired second-rounder is pick No. 57.

The Rams paid Cooks a $4 million roster bonus earlier this offseason, and the team will incur $21.8 million in dead money as a result of the trade.

Cooks faced a similar situation in 2018 when he was acquired by the Rams before the draft in exchange for a first-round pick from the New England Patriots. Prior to that season, Cooks and the Rams agreed to a five-year, $81 million deal.

The Saints originally selected Cooks out of Oklahoma State in the first round of the 2014 draft. After three seasons in New Orleans, the receiver was traded to New England in exchange for a first-round pick.

After earning 1,000-yard receiving seasons with the Saints, Patriots, and Rams, Cooks now has a chance to join Brandon Marshall as the only players in NFL history to do so with four teams.

The agreed deal between the Rams and Texans is an attempt to make up for mistakes on both sides.

Los Angeles had shelled out plenty of big-money contracts over the past two years, most of which have turned out to be bad deals. So, offloading Cooks is a way to lessen the financial blow for upcoming seasons.

On the side of Houston, coach Bill O’Brien is trying to replace DeAndre Hopkins, whom he shipped off to Arizona in exchange for running back Davis Johnson and a second-rounder.

While Cooks is a talented player, he’s also not the same caliber of pass-catcher as Hopkins, who many regard as the best receiver in football. However, Cooks was a vital part of the Rams team that made it to a Super Bowl.

In that season, Cooks caught 80 passes for 1,204 yards and five touchdowns. Last season was a different story, as the receiver managed only 42 catches for 583 yards while dealing with concussion issues, a decline in targets, and a regression in Jared Goff’s quarterback play.

In any case, the acquisition of Cooks will strongly lessen the blow of losing Hopkins for Texans quarterback Deshaun Watson. Houston can boast a full stable of proven receivers with Cooks, Kenny Stills, Will Fuller, and Randall Cobb on the roster.

On the flip side of the Cooks trade, look for the Rams to add to their receiving unit in this month’s draft, which most experts agree to be loaded with depth at the position.

Both Rams, Texans Aiming to Contend

Houston is currently building an intriguing offense led by a talented (and still young) quarterback. If the front office can bolster the offensive line and consistently give Watson time to throw, the Texans may very well have the toughest offense to defend, given their arsenal of receivers, Johnson at running back, and a dual threat under center.

After going 10-6 a season ago before losing to the eventual Super Bowl champs in the second round of the playoffs, Houston will have strong championship aspirations going into 2020.

The Rams are hoping to rekindle the magic of the 2018 season when coach Sean McVay was able to unlock Goff’s potential. Los Angeles ended with a record of 9-7 in a loaded NFC West and missed out on the postseason a season ago.

According to FanDuel Sportsbook, the Rams are the closer of the two teams to winning this season’s Super Bowl.